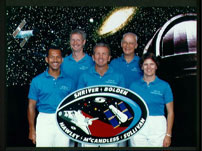 The launch was scheduled for April 18, then April 12, then April 10, following the Flight Readiness Review (FRR). The first date set at FRR was earlier than that shown on previous planning schedules. The launch scheduled for April 10 was scrubbed at T-4 minutes due to a faulty valve in auxiliary power unit (APU) number one. The APU was replaced and payload batteries recharged. Countdown briefly halted at T-31 seconds when computer software failed to shut down a fuel valve line on ground support equipment. Engineers ordered valve to shut and countdown continued.