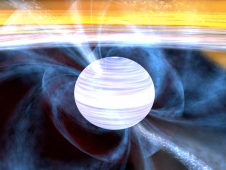 Pulsars slow down their rotation as they age and eventually cease their characteristic emissions. That can change if an aging pulsar is a member of a binary system containing a normal star. Gas flowing from the star can spin the pulsar up to hundreds of revolutions a second and allow it to resume its lighthouse-like beams of radiation. Credit: NASA
› Watch animation 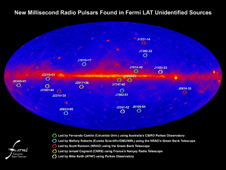 Radio searches netted 17 new millisecond pulsars by examining the Fermi Gamma-ray Space Telescope's list of unidentified sources. Colored circles indicate the positions of the new pulsars on the Fermi one-year all-sky map. Credit: NASA/DOE/Fermi LAT Collaboration
› Larger image Radio astronomers have uncovered 17 millisecond pulsars in our galaxy by studying unknown high-energy sources detected by NASA's Fermi Gamma-ray Space Telescope. The astronomers made the discovery in less than three months. Such a jump in the pace of locating these hard-to-find objects holds the promise of using them as a kind of "galactic GPS" to detect gravitational waves passing near Earth.

A pulsar is the rapidly spinning and highly magnetized core left behind when a massive star explodes. Because only rotation powers their intense gamma-ray, radio and particle emissions, pulsars gradually slow as they age. But the oldest pulsars spin hundreds of times per second -- faster than a kitchen blender. These millisecond pulsars have been spun up and rejuvenated by accreting matter from a companion star.

"Radio astronomers discovered the first millisecond pulsar 28 years ago," said Paul Ray at the Naval Research Laboratory in Washington. "Locating them with all-sky radio surveys requires immense time and effort, and we've only found a total of about 60 in the disk of our galaxy since then. Fermi points us to specific targets. It's like having a treasure map."

"The Global Positioning System uses time-delay measurements among satellite clocks to determine where you are on Earth," explained Scott Ransom of the National Radio Astronomy Observatory in Charlottesville, Va. "Similarly, by monitoring timing changes in a constellation of suitable millisecond pulsars spread all over the sky, we may be able to detect the cumulative background of passing gravitational waves."

The sources Fermi detected are not associated with any known gamma-ray emitting objects and did not show evidence of pulsing behavior. However, scientists considered it likely that many of the unidentified sources would turn out to be pulsars.

For a more detailed look at radio wavelengths, Ray organized the Fermi Pulsar Search Consortium and recruited a handful of radio astronomers with expertise in using five of the world's largest radio telescopes -- the National Radio Astronomy Observatory, Robert C. Byrd Green Bank Telescope in W.Va., the Parkes Observatory in Australia, the Nancay Radio Telescope in France, the Effelsberg Radio Telescope in Germany and the Arecibo Telescope in Puerto Rico.

After studying approximately 100 targets, and with a computationally intensive data analysis still under way, the discoveries have started to pour in.

"Other surveys took a decade to find as many of these pulsars as we have," said Ransom, who led one of the discovery groups. "Having Fermi tell us where to look is a huge advantage."

Four of the new objects are "black widow" pulsars, so called because radiation from the recycled pulsar is destroying the companion star that helped spin it up.

"Some of these stars are whittled down to masses equivalent to tens of Jupiters," said Ray. "We've doubled the known number of these systems in the galaxy's disk, and that will help us better understand how they evolve."

NASA's Fermi Gamma-ray Space Telescope is an astrophysics and particle physics partnership, developed in collaboration with the Department of Energy, along with important contributions from academic institutions and partners in France, Germany, Italy, Japan, Sweden, and the U.S. The National Radio Astronomy Observatory is a facility of the National Science Foundation operated under cooperative agreement by Associated Universities, Inc.