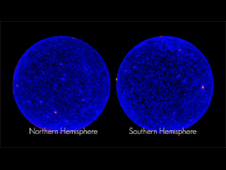 These all-sky movies shows Fermi LAT counts of gamma rays with energies greater than 300 million electron volts from August 4 to October 30, 2008. Brighter colors indicate brighter gamma-ray sources. The circles in this image show the northern (left) and southern galactic skies. Their edges lie along the plane of our galaxy, the Milky Way. Credit: NASA/DOE/Fermi LAT Collaboration
> Download videos The gamma-ray sky comes alive in a movie made from data acquired by NASA’s Fermi Gamma-ray Space Telescope during its first three months of operations. Gamma rays from sources near and far turn the sky into a hypnotic froth. The sun arcs serenely across the northern sky as active galaxies called blazars flare up and fade out.

The movie, made from the first 87 days of data from Fermi’s Large Area Telescope (LAT), was revealed today during a live 24-hour video webcast called “Around the World in 80 Telescopes.” Organized by the European Southern Observatory headquartered in Garching, Germany, the webcast is part of the 100 Hours of Astronomy project, a worldwide celebration of astronomy running through April 5.

“The movie shows counts of gamma rays seen by Fermi’s LAT, and each frame shows the gamma rays collected in one day,” said presenter Elizabeth Hays, an astrophysicist on the Fermi team. Only gamma rays with energies greater than 300 million electron volts -- or 150 million times more than that of visible light -- are shown. Brighter colors indicate greater numbers of detected gamma rays and thus the locations of bright gamma-ray sources.

The movie shows the entire sky as northern and southern halves, with the plane of our galaxy, the Milky Way, running along the circular edges. “This presentation provides a better view of sources outside our galaxy,” Hays noted, “but it’s an unusual way to view the sky.” The northern view includes the familiar constellation Ursa Major, part of which forms the Big Dipper. The southern view includes the constellations Cetus and Pegasus.

“One of the first things to notice in the movie is the source that arcs across the northern galactic sky. That’s the sun moving along the ecliptic plane,” Hays said. The sun appears to move through the sky because the Earth revolves around it. This is the same reason constellations progress through the sky during the year.

However, Fermi’s LAT isn’t detecting gamma rays produced directly by the sun -- at least not yet. “The LAT sees the sun because cosmic rays -- nuclei traveling close to the speed of light -- strike the sun’s gas and the light it emits. These collisions produce gamma rays,” Hays explained. The LAT will sense the sun directly when a sufficiently powerful solar eruption occurs, but the sun is now in a quiet portion of its activity cycle.

Another striking aspect of the movie is that, even far from the brightest gamma-ray sources, the sky is not dark. “We see a general background of gamma rays over the whole sky,” Hays said. Some of this glow is the result of cosmic rays colliding with gas and light in our own galaxy and producing gamma rays. But some of this emission originates from beyond our galaxy. “Although we don't know exactly where all of these gamma rays are coming from, we know that some of them must be the collective radiation from galaxies we are not detecting directly,” she explained. It’s possible that something more exotic could also be contributing to this background glow, and Fermi is making measurements to test such ideas.

One galactic source lies far enough from the Milky Way’s plane that it stands out in the movie. “That’s PSR J1836+5925, one of the new class of pulsars discovered by Fermi,” Hays said. The pulsar is a fast-spinning neutron star that sends a broad fan of gamma rays toward us with each rotation. Neutron stars pack twice the mass of the sun into a sphere the size of Manhattan and can spin thousands of times in one second. “It looks steady in the movie because we have to add up gamma rays from many rotations to see the pulses,” she noted.

Most of the other bright sources in the movie are actually distant galaxies. Each of these active galaxies, called blazars, hosts a central black hole with a mass of a million suns. Somehow, the black hole produces extremely fast-moving jets of matter, and with blazars we’re looking almost directly down the jet. “The strong variations in brightness that you see during the movie tell us that something about these jets has changed,” Hays said.

One example is the blazar AO 0235+164, located 7.5 billion light-years away in the constellation Aries. “The flares we are seeing happened when the universe was about half of its current age,” she explained. “The LAT sees a very strong flare. The gamma rays increase by 30 to 40 times in a single day. On that day, AO 0235 became one of the brightest gamma-ray sources in the sky.”

Fermi’s LAT became the first gamma-ray telescope to see the blazar called PKS 1502+106. The galaxy, located 10 billion light-years away in the constellation Boötes, appeared suddenly, flared in brightness for a few days, and then faded away.

Such rapid and dramatic change underscores one of the most valuable things the Fermi team does. “We watch the sky all the time and alert other telescopes, in space and on the ground, when something interesting is going on,” Hays said. This gives other astronomers the chance to watch these events at other wavelengths, such as visible light, infrared, radio, ultraviolet, X-ray, and even gamma rays above the energy the LAT can detect.

“The broader the wavelength coverage, the better our understanding of the event will be,” Hays adds. “We have to be quick to catch these flares before they fade away.”