Fermi's Large Area Telescope (LAT) scans the entire sky every three hours, continually deepening its portrait of the sky in gamma rays, the most energetic form of light. While the energy of visible light falls between about 2 and 3 electron volts, the LAT detects gamma rays with energies ranging from 20 million to more than 300 billion electron volts (GeV).

At higher energies, gamma rays are rare. Above 10 GeV, even Fermi's LAT detects only one gamma ray every four months from some sources.

› View larger
Fermi's view of the gamma-ray sky continually improves. This image of the entire sky includes three years of observations by Fermi's Large Area Telescope (LAT). It shows how the sky appears at energies greater than 1 billion electron volts (1 GeV). Brighter colors indicate brighter gamma-ray sources. A diffuse glow fills the sky and is brightest along the plane of our galaxy (middle). Discrete gamma-ray sources include pulsars and supernova remnants within our galaxy as well as distant galaxies powered by supermassive black holes. Credit: NASA/DOE/Fermi LAT Collaboration

› View larger
This all-sky Fermi view includes only sources with energies greater than 10 GeV. From some of these sources, Fermi's LAT detects only one gamma-ray photon every four months. Brighter colors indicate brighter gamma-ray sources.
Credit: NASA/DOE/Fermi LAT Collaboration "Before Fermi, we knew of only four discrete sources above 10 GeV, all of them pulsars," said David Thompson, an astrophysicist at NASA's Goddard Space Flight Center in Greenbelt, Md. "With the LAT, we've found hundreds, and we're showing for the first time just how diverse the sky is at these high energies."

Any object producing gamma rays at these energies is undergoing extraordinary astrophysical processes. More than half of the 496 sources in the new census are active galaxies, where matter falling into a supermassive black hole powers jets that spray out particles at nearly the speed of light.

Only about 10 percent of the known sources lie within our own galaxy. They include rapidly rotating neutron stars called pulsars, the expanding debris from supernova explosions, and in a few cases, binary systems containing massive stars.

More than a third of the sources are completely unknown, having no identified counterpart detected in other parts of the spectrum. With the new catalog, astronomers will be able to compare the behavior of different sources across a wider span of gamma-ray energies for the first time.

Just as bright infrared sources may fade to invisibility in the ultraviolet, some of the gamma-ray sources above 1 GeV vanish completely when viewed at higher, or "harder," energies.

One example is the well-known radio galaxy NGC 1275, which is a bright, isolated source below 10 GeV. At higher energies it fades appreciably and another nearby source begins to appear. Above 100 GeV, NGC 1275 becomes undetectable by Fermi, while the new source, the radio galaxy IC 310, shines brightly.

The Fermi hard-source list is the product of an international team led by Pascal Fortin at the Ecole Polytechnique's Laboratoire Leprince-Ringuet in Palaiseau, France, and David Paneque at the Max Planck Institute for Physics in Munich.

The catalog serves as an important roadmap for ground-based facilities called Atmospheric Cherenkov Telescopes, which have amassed about 130 gamma-ray sources with energies above 100 GeV. They include the Major Atmospheric Gamma Imaging Cherenkov telescope (MAGIC) on La Palma in the Canary Islands, the Very Energetic Radiation Imaging Telescope Array System (VERITAS) in Arizona, and the High Energy Stereoscopic System (H.E.S.S.) in Namibia.

"Our catalog will have a significant impact on ground-based facilities' work by pointing them to the most likely places to find gamma-ray sources emitting above 100 GeV," Paneque said.

Compared to Fermi's LAT, these ground-based observatories have much smaller fields of view. They also make fewer observations because they cannot operate during daytime, bad weather or a full moon. 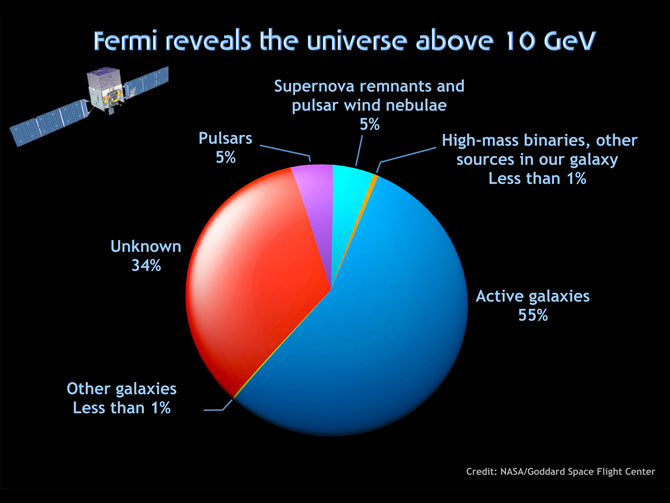 › View larger
More than half of the sources above 10 GeV are black-hole-powered active galaxies. More than a third of the sources are completely unknown, having no identified counterpart detected in other parts of the spectrum. Credit: NASA's Goddard Space Flight Center

NASA's Fermi Gamma-ray Space Telescope is an astrophysics and particle physics partnership. Fermi is managed by Goddard. It was developed in collaboration with the U.S. Department of Energy, with important contributions from academic institutions and partners in France, Germany, Italy, Japan, Sweden and the United States.

› For images related to this story