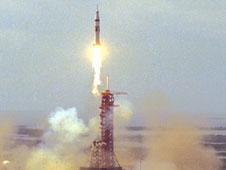 Image above: The final Apollo spacecraft lifts off atop a Saturn IB rocket on July 15, 1975, to begin the Apollo-Soyuz Test Project, a mission that would see the American Apollo link in space with a Soyuz spacecraft from the then-Soviet Union. Image credit: NASA
› View larger image 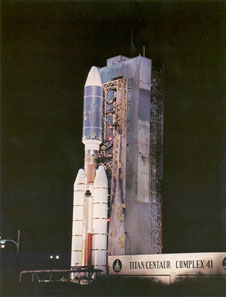 Image above: The Voyager 2 spacecraft stands on the launch pad on Aug. 20, 1977, before a Titan rocket lifts it into space to start the "Grand Tour" of the outer planets. Image credit: NASA
› View larger image 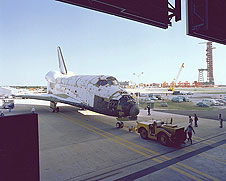 Image above: Space shuttle Columbia is towed into an orbiter processing facility on March 25, 1979, to begin months of preparations ahead of its first flight two years later. Image credit: NASA
› View larger image

Kennedy Space Center spent the 1970s bridging the achievements of the 1960s and the expectations of the 1980s. The center emerged from the decade as a place of adaptation and innovation.

The 10-year span saw Kennedy help NASA reach farther into space than ever before. The center launched men to the moon five times, rescued a crew during an emergency, sent America's first space station into orbit and then lofted a pair of spacecraft on a rare journey to see the four outer planets up -close.

Even the missions that fell in between those stand as civilization-defining scientific milestones. The twin Viking landers, for example, set down softly on the Martian surface and beamed back the first analysis of the rust-colored soil that gives the red planet its nickname.

There was also the Apollo-Soyuz flight in 1975 that saw American astronauts and Russian cosmonauts shake hands in space for the first time, a preview of the relationship that now sustains the International Space Station.

"Certainly in the manned program, it's the transition era between this kind of radical, exciting, somewhat crazy moon program of the '60s and this very stable, very useful shuttle program of the '80s," said Roger Launius, curator at the Smithsonian's National Air and Space Museum and NASA's former chief historian.

The chances of NASA accomplishing such milestones looked distant when the decade began. A year after the first moon landing, the center saw its first mass employee layoff as Apollo's end was scheduled. Although the program's scale was diminished, Kennedy workers still had a few Apollo missions to launch, including Apollo 13. Kennedy's team worked closely with NASA's other spaceflight centers through one difficulty after another to get the three astronauts back to Earth safely.

The layoffs continued through the return of Apollo 17 in December 1972, the last mission to carry astronauts to the lunar surface.

Having landed on the moon six times, NASA set its sights on Earth orbit with the Skylab program in 1973. Built inside the third stage of a Saturn V rocket, Skylab was designed to be a large workshop for astronauts. It was outfitted with life support, communications and other critical systems, as well as scientific equipment including a telescope designed to look at the sun.

Skylab developed mission-threatening problems minutes after launch when aerodynamic forces stripped a solar panel and micrometeoroid shield off the rocket as it climbed through the atmosphere into space.

As it had before, Kennedy's team worked closely with other NASA centers to come up with a plan to save the perilously injured station. Pete Conrad's crew of three left Kennedy aboard an Apollo spacecraft loaded with improvised tools and methods. The astronauts sprung a partially deployed solar panel and opened an umbrella-like covering over the outer shell of the workshop.

The Kennedy launch team sent the final Apollo spacecraft into orbit in 1975, timing the liftoff perfectly to allow a docking with a Soyuz capsule launched from the Soviet Union. The successful flight marked the last time an American astronaut would fly into space during the decade.

Some of the greatest achievements of the 1970s belonged to the most sophisticated machines of the day: robotic probes with computer brains, cameras and instruments that would return a scientist's delight of information about distant worlds. Preparing the spacecraft to fly meant dealing with increasingly complex machinery and unprecedented standards to keep the spacecraft free of contaminants, particularly those vehicles making landings on other worlds.

"There is this transformation in planetary science that forces Kennedy to do payload processing it had never done before," Launius said. "It's critical to Viking. If they allow any biological material on the spacecraft, they're going to get a false reading and fundamentally Viking was about biological experiments."

Pioneer and Voyager spacecraft rode powerful boosters from the coast of Florida to start journeys that would not end until they crossed outside the solar system.

Pioneers 10 and 11 laid down paths beginning with their launches in 1972 to become the first to cross the asteroid belt between Mars and Jupiter. Both Pioneers gave Earth-bound researchers unprecedented photos of Jupiter, with Pioneer 11 going by Saturn, too. They are now far outside the orbits of the planets and moving fast enough to leave the solar system.

Two Voyager spacecraft set out in 1975 to match the Pioneers’ record by flying by four planets. Taking advantage of an alignment that happens once every 175 years, Voyagers 1 and 2 were sent on a "Grand Tour" of the outer solar system. Picking up speed with each planetary encounter, the Voyagers are farther into space than the Pioneer spacecraft. Voyager 1 is more than 11 billion miles from Earth, so far that it takes radio signals travelling at the speed of light 33 hours to reach Earth.

"It was a golden age of planetary science and Kennedy was the jumping-off place to make it happen," Launius said.

Following the wind- down of the early 1970s, Kennedy's momentum started ramping up anew towards the end of the decade when the infrastructure for the space shuttle fleet took shape and saw some testing. Enterprise, the prototype that was used to prove the shuttle design would work as a glider, was enlisted to test hardware and techniques that would be used to prepare shuttles for launch for the next 30 years.

Columbia, the first shuttle intended to fly in space, would provide one of the final milestones of the 1970s at Kennedy when it arrived atop a modified 747 Shuttle Carrier Aircraft to begin what would be a groundbreaking but arduous time of preparations for its first flight. Although that mission, STS-1, would not begin until 1981, its successes were built on the agency's achievements throughout the decade before.

"The whole idea of processing the shuttle, nobody had any idea what that was about until the 1970s," Launius said. "Somebody had to put in a process whereby you take an orbiter and you prepare it for flight and you do all the checkouts and you stack it and you take it out and launch it, and all that is done at Kennedy and can be done nowhere else."