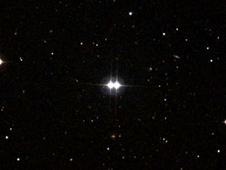 HD 80606 (right) and its binary partner, HD 80607, lie 190 light-years away in Ursa Major. The pair can be seen with binoculars. Credit: DSS/STScI/AURA
> Larger image What would happen if, for a single day, the sun's light and heat were amplified a thousand times? While this sounds like the setup for a classic tale of science fiction, astronomers know of one planet that experiences just such a climate extreme. Now, thanks to NASA's Spitzer Space Telescope, scientists have measured how this planet's atmosphere responds to a super-summer day.

The planet in question orbits a sun-like star catalogued as HD 80606. Part of a binary system, the star is joined in space by a near-twin called HD 80607. These siblings aren't particularly close -- they're separated by about 125 times the distance between Saturn and our sun. The stellar couple lies 190 light-years away in the constellation Ursa Major where, tucked between the Greater Bear's front legs, they can be seen through binoculars.

HD 80606b was discovered in 2001 by a Swiss planet-hunting team led by Dominique Naef of the Geneva Observatory, Switzerland. It's a gas giant planet -- much like Jupiter in our own solar system but about four times more massive. What makes HD 80606b unique is its orbit -- the most elongated yet found, almost as lopsided as the orbit of Comet Halley in our own solar system. Like Halley, HD 80606b spends most of its time far from its star and then, at closest approach, dramatically whips around it.

"There are several other planets with very high eccentricities, but HD 80606b has the highest known," says Greg Laughlin of Lick Observatory, University of California at Santa Cruz. He's the lead author of the study, which appears today in the science journal Nature. 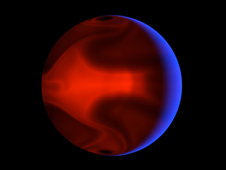 This model of HD 80606b shows the stormy response of the planet's atmosphere 4.4 days after it passed 2.8 million miles from its star. The model is based on Nov. 20, 2007, observations by NASA's Spitzer Space Telescope, which began 20 hours prior to closest approach and continued until 10 hours after the event. Credit: NASA/JPL-Caltech/G. Laughlin et al.
> Larger image
> View and download animation Every 111 days, HD 80606b shuttles between 79 million miles from its star -- equivalent to midway between Venus and Earth in our solar system -- to just 2.8 million miles away. That's nearly 13 times closer then Mercury's average distance to the sun -- and less than four times the diameter of HD 80606.

Laughlin and his colleagues observed HD 80606b before, during and just after its closest passage to the star on Nov. 20, 2007. The Spitzer team didn't know whether the planet would disappear completely behind the star. Measurements made with the planet constantly in view could provide the temperature change, but not the actual temperatures. In fact, HD 80606b did pass behind its star. The Spitzer measurements show that, over the course of six hours, the planet's temperature rose from 980 to 2,240 degrees Fahrenheit.

Tides lock the rotation of most "hot Jupiters" to their orbital period. This means they keep the same side facing the star, which makes it impossible for astronomers to observe the hot spot. But because of its odd orbit, HD 80606b hasn't become tidally locked. It rotates on its axis every 34 hours. "The planet is spinning at a fast enough rate for the planet's hot spot to come into view," says co-author Drake Deming of NASA's Goddard Space Flight Center. "The hot spot can't hide."

"We watched the development of one of the fiercest storms in the galaxy," Laughlin says. "This is the first time that we've detected weather changes in real time on a planet outside our solar system." The team used the data to model how heat flows through the planet's atmosphere -- the first time such information has been available for a planet orbiting another star. HD 80606b heats up and cools down fast. This indicates that the stellar energy intercepted by the planet is being absorbed fairly high up in the atmosphere, where the air is relatively thin.

Because the scientists detected the planet's disappearance behind the star, there's a 15 percent chance that HD 80606b will pass in front of -- or transit -- the star from our viewing angle. The next possibility of detecting HD 80606b in transit falls on Feb. 14. The event could last up to 17 hours and would provide much additional information on the nature of this peculiar world. Francis Reddy
NASA's Goddard Space Flight Center
› Back To Top