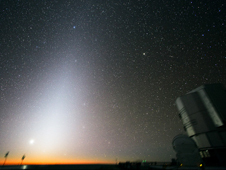 A glow called the zodiacal light can be seen in the sky before sunrise or after sunset. It's formed by sunlight scattered off of dust near the plane of Earth's orbit.
Credit: Yuri Beletsky/ESO Paranal
> Larger image 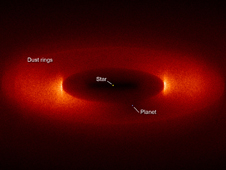 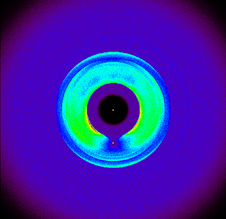 GREENBELT, Md. -- Supercomputer simulations of dusty disks around sunlike stars show that planets nearly as small as Mars can create patterns that future telescopes may be able to detect. The research points to a new avenue in the search for habitable planets.

"It may be a while before we can directly image earthlike planets around other stars but, before then, we'll be able to detect the ornate and beautiful rings they carve in interplanetary dust," says Christopher Stark, the study's lead researcher at the University of Maryland, College Park.

Working with Marc Kuchner at NASA's Goddard Space Flight Center in Greenbelt, Md., Stark modeled how 25,000 dust particles responded to the presence of a single planet -- ranging from the mass of Mars to five times Earth's -- orbiting a sunlike star. Using NASA's Thunderhead supercomputer at Goddard, the scientists ran 120 different simulations that varied the size of the dust particles and the planet's mass and orbital distance.

"Our models use ten times as many particles as previous simulations. This allows us to study the contrast and shapes of ring structures," Kuchner adds. From this data, the researchers mapped the density, brightness, and heat signature resulting from each set of parameters.

"It isn't widely appreciated that planetary systems -- including our own -- contain lots of dust," Stark adds. “We’re going to put that dust to work for us."

Much of the dust in our solar system forms inward of Jupiter's orbit, as comets crumble near the sun and asteroids of all sizes collide. The dust reflects sunlight and sometimes can be seen as a wedge-shaped sky glow -- called the zodiacal light -- before sunrise or after sunset.

The computer models account for the dust's response to gravity and other forces, including the star's light. Starlight exerts a slight drag on small particles that makes them lose orbital energy and drift closer to the star.

"The particles spiral inward and then become temporarily trapped in resonances with the planet," Kuchner explains. A resonance occurs whenever a particle's orbital period is a small-number ratio -- such as two-thirds or five-sixths -- of the planet's.

For example, if a dust particle makes three orbits around its star every time the planet completes one, the particle repeatedly will feel an extra gravitational tug at the same point in its orbit. For a time, this extra nudge can offset the drag force from starlight and the dust can settle into subtle ring-like structures.

"The particles spiral in toward the star, get trapped in one resonance, fall out of it, spiral in some more, become trapped in another resonance, and so on," Kuchner says. Accounting for the complex interplay of forces on tens of thousands of particles required the mathematical horsepower of a supercomputer.

Some scientists note that the presence of large amounts of dust could present an obstacle to directly imaging earthlike planets. Future space missions -- such as NASA's James Webb Space Telescope, now under construction and scheduled for launch in 2013, and the proposed Terrestrial Planet Finder -- will study nearby stars with dusty disks. The models created by Stark and Kuchner give astronomers a preview of dust structures that signal the presence of otherwise hidden worlds.

"Our catalog will help others infer a planet's mass and orbital distance, as well as the dominant particle sizes in the rings," Stark says.

Stark and Kuchner published their results in the October 10 issue of The Astrophysical Journal. Stark has made his atlas of exo-zodiacal dust simulations available online.

For images related to this release, please visit:
http://www.nasa.gov/centers/goddard/news/topstory/2008/dust_rings.html