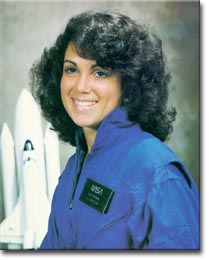 We are a curious people, a nation that wonders about what we do not know, whether in laboratories or medical centers, from frontiers of the mind to frontiers of geography, and even beyond earth's limitations. We are curious about what is beyond the next hill, the next river or mountain. What's beyond the next bend in the road? - we not only want to know the answer to that question, we even want to determine where that road will go.

And we are a questing people - curiosity in action - pushing back the boundaries of the unknown and adding to our storehouse of new knowledge that has served us so well. Within a tiny time frame of history we have leaped past the whole world with advances undreamed of just a few years ago.

The freedoms we have most prized have not been just "freedoms from." Our most important freedom is the "freedom to do", to be curious, to be a questing people.

The conquest of space is not merely a technological project of interest to a handful of select scientists and specialists, valuable though that research and information may be.

It is nothing less than an expression of a basic American spirit. After all, we're the same people who tamed a continent, crossed frontiers, scaled mountains, and built the greatest strongest nation on earth. We see an opportunity, a challenge, think up a way to meet it, test it[,] adjust it and ultimately succeed with it.

We hoped these past few days would never come. And for nearly a quarter of a century we pushed back the time we knew -- intuitively -- must sometime be, that day when despite all our best efforts, there would be a loss.

And our days of triumph have been many. This was the fifty sixth manned mission into space - number 25 for the shuttle. These missions have utilized incredible powers, complexities and speeds of nearly 5 miles a second in orbit to garner a bountiful harvest of new information, new research and new human experience to add to our storehouse of knowledge.

Now, all Americans have shared in this tragedy that befell the Challenger crew. From my own experience, I have a deep personal sense of loss, and I could not help but recall that January day in 1967 when Gus Grissom, Ed White, and Roger Chaffee also paid - paid the price for triumph.

Now let me speak of happiness. It has been my observation that the happiest of people, the vibrant doers of the world are almost always those who are using - who are putting into play, calling upon, depending upon-the greatest number of their God-given talents and capabilities. For them, curiosity is a way of life, and the quest for knowledge and the new is insatiable and exhilarating.

But it becomes many-fold more meaningful when put to use for a higher purpose, for something bigger than self, for a goal that calls on those individuals to dictate themselves to accomplishment for the betterment of our nation, and indeed for all mankind. The individual's safety takes second place to that curiosity, that quest, that daring and dedication with the highest of purpose.

Judy Resnik, whom we both honor and memorialize here today, was such a person in every sense of those words. I know that from talking to her in my office after her first flight. She and her fellow crew members knew that exultation of accomplishment, the triumph of spirit that came from dedication to a purpose larger than themselves. They would never have joined those tepid and vacuous souls whose only goal is self-interest and safety, and neither can we.

Judy and the other six members of the Challenger crew went aloft, as does every mission, with our hopes, our dreams and our aspirations as a nation riding with them. Their mission was not to be, but tragedy does not lessen the importance, the value, and the need for triumphs in the future.

Judy would be the first to say "Fix it and get on with it."

Our finest memorial, then, is one of dedication, in each of our lives, to those qualities Judy exemplified so well.

The dedication and quest of the seven Challenger astronauts must be our own - for if that spirit dies, a part of America dies with it.

We will not let that happen.

So as we reflect on Judy's life, and Challenger's last voyage in the days and weeks ahead, let's never forget the last words that came from that spacecraft: "Go at throttle up[.]"