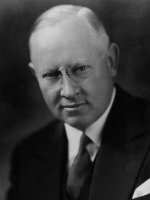 George W. Lewis was born at Ithaca, New York, March 10, 1882. He was the son of William Henry Lewis and Edith Sweetland Lewis, married Myrtle Harvey in 1908. From Scranton High School, he went on to and graduated from Cornell University with a Masters Degree in Mechanical Engineering in 1910, then taught at Swarthmore College from 1910 to 1917. He moved on to become head of research at Clarke Thomson in Philadelphia, PA, a private foundation for the promotion of aviation and aircraft engines. This in turn led to his membership on the National Advisory Committee for Aeronautics' (NACA) Power Plants Subcommittee. The NACA made Lewis its first Executive Officer in 1919. In 1924, he was given the title Director of Aeronautical Research which he kept until 1947.

The NACA was an advisory committee made up of industry and military members. Lewis was the liaison between the committee and the Langley Laboratory. He also worked with Congress and directly with the military. During his tenure, the NACA made many advances in aeronautics including the NACA engine cowling, retractable landing gear, and streamlining studies. The NACA characterized airfoil shapes for wings and propellers in wind tunnel testing which simplified aircraft design.

In 1934, he was appointed by Secretary Newton D. Baker to the Special Committee on the Army Air Corps (Baker Board). In 1937, he was appointed by the President to the Inter-American Aviation Conference in Peru, and in 1941 to the U.S. National Commission to deal with Inter-American aviation matters. During the war, he served under presidential appointment on the National Inventors' Council. In 1948, he received the U.S. Presidential Medal for Merit and the O.B.E. (Hon.) from Great Britain.

In 1936, he was awarded the Daniel Guggenheim Medal "for outstanding success in the direction of aeronautical research," the Spirit of St. Louis Medal of the American Society of Mechanical Engineers in 1944, and was chosen by the Royal Aeronautical Society of Great Britain to deliver the 1939 Wilbur Wright Lecture in London. In 1934, Norwich University awarded him the degree of Sc.D. (Hon.) and in 1944 the Illinois Institute of Technology an Eng.D. (Hon.).

He was a life member of the national Aeronautic Association and served for many years on the Contest Board to homologate aviation performance records. He also served on boards or committees to make aeronautical awards; notably for the Brewer Trophy, Collier Trophy, Guggenheim Safe Aircraft Competition, Guggenheim Medal, Wright Medal, and Manley Memorial Medal.

He was a Past President and Honorary Fellow of the Institute of the Aeronautical Sciences, member of the Society of Automotive Engineers, American Society of Mechanical Engineers, National Academy of Sciences, and American Philosophical Society.

George W. Lewis died at his summer home, Lake Winola, Pennsylvania, on July 12, 1948. He was survived by six children and six grandchildren.