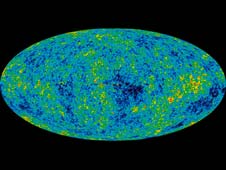 › View larger image
This image is the detailed, all-sky picture of the infant universe created from seven years of WMAP data. The image reveals 13.7 billion year old temperature fluctuations (shown as color differences) that correspond to the seeds that grew to become the galaxies. Credit: NASA After nine years of scanning the sky, the Wilkinson Microwave Anisotropy Probe (WMAP) space mission has concluded its observations of the cosmic microwave background, the oldest light in the universe. The spacecraft has not only given scientists their best look at this remnant glow, but also established the scientific model that describes the history and structure of the universe.

"WMAP has opened a window into the earliest universe that we could scarcely imagine a generation ago," said Gary Hinshaw, an astrophysicist at NASA's Goddard Space Flight Center in Greenbelt, Md., who manages the mission. "The team is still busy analyzing the complete nine-year set of data, which the scientific community eagerly awaits."

WMAP was designed to provide a more detailed look at subtle temperature differences in the cosmic microwave background that were first detected in 1992 by NASA's Cosmic Background Explorer (COBE). The WMAP team has answered many longstanding questions about the universe's age and composition. WMAP acquired its final science data on Aug. 20. On Sept. 8, the satellite fired its thrusters, left its working orbit, and entered into a permanent parking orbit around the sun.

"We launched this mission in 2001, accomplished far more than our initial science objectives, and now the time has come for a responsible conclusion to the satellite's operations," said Charles Bennett, WMAP's principal investigator at Johns Hopkins University in Baltimore.

WMAP detects a signal that is the remnant afterglow of the hot young universe, a pattern frozen in place when the cosmos was only 380,000 years old. As the universe expanded over the next 13 billion years, this light lost energy and stretched into increasingly longer wavelengths. Today, it is detectable as microwaves.

WMAP is in the Guinness Book of World Records for "most accurate measure of the age of the universe." The mission established that the cosmos is 13.75 billion years old, with a degree of error of one percent.

WMAP also showed that normal atoms make up only 4.6 percent of today's cosmos, and it verified that most of the universe consists of two entities scientists don't yet understand.

Dark matter, which makes up 23 percent of the universe, is a material that has yet to be detected in the laboratory. Dark energy is a gravitationally repulsive entity which may be a feature of the vacuum itself. WMAP confirmed its existence and determined that it fills 72 percent of the cosmos.

Another important WMAP breakthrough involves a hypothesized cosmic "growth spurt" called inflation. For decades, cosmologists have suggested that the universe went through an extremely rapid growth phase within the first trillionth of a second it existed. WMAP's observations support the notion that inflation did occur, and its detailed measurements now rule out several well-studied inflation scenarios while providing new support for others.

"It never ceases to amaze me that we can make a measurement that can distinguish between what may or may not have happened in the first trillionth of a second of the universe," says Bennett.

WMAP was the first spacecraft to use the gravitational balance point known as Earth-Sun L2 as its observing station. The location is about 930,000 miles or (1.5 million km) away.

"WMAP gave definitive measurements of the fundamental parameters of the universe," said Jaya Bapayee, WMAP program executive at NASA Headquarters in Washington. "Scientists will use this information for years to come in their quest to better understand the universe."

Launched as MAP on June 30, 2001, the spacecraft was later renamed WMAP to honor David T. Wilkinson, a Princeton University cosmologist and a founding team member who died in September 2002.