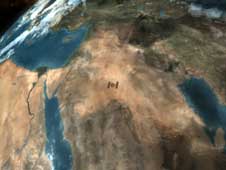 > More Swift spacecraft movies
Since its launch in 2004, NASA's Swift has detected more than 430 gamma-ray bursts. Roughly half of them are 'dark' bursts that emit little or no visible light. Credit: NASA/Goddard Space Flight Center Conceptual Image Lab 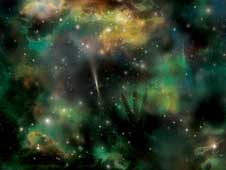 > View larger image
Dense knots of dust in otherwise normal galaxies dim the light of a dark gamma-ray burst (at center in this illustration). The dust absorbs most or all of a burst's visible light but not higher-energy X-rays and gamma rays. Credit NASA/Swift/Aurore Simonnet Gamma-ray bursts are the universe's biggest explosions, capable of producing so much light that ground-based telescopes easily detect it billions of light-years away. Yet, for more than a decade, astronomers have puzzled over the nature of so-called dark bursts, which produce gamma rays and X-rays but little or no visible light. They make up roughly half of the bursts detected by NASA's Swift satellite since its 2004 launch.

"One possible explanation for dark bursts was that they were occurring so far away their visible light was completely extinguished," said Joshua Bloom, associate professor of astronomy at the University of California (UC), Berkeley and the study's senior author. Thanks to the expansion of the universe and a thickening fog of hydrogen gas at increasing cosmic distances, astronomers see no visible light from objects more than about 12.9 billion light-years away. Another possibility: Dark bursts were exploding in galaxies with unusually thick amounts of interstellar dust, which absorbed a burst's light but not its higher-energy radiation.

Using one of the world's largest optical telescopes, the 10-meter Keck I in Hawaii, the team looked for unknown galaxies at the locations of 14 Swift-discovered dark bursts. "For eleven of these bursts, we found a faint, normal galaxy," said Daniel Perley, the UC Berkeley graduate student who led the study. If these galaxies were located at extreme distances, not even the Keck telescope could see them. Most gamma-ray bursts occur when massive stars run out of nuclear fuel. As their cores collapse into a black hole or neutron star, gas jets -- driven by processes not fully understood -- punch through the star and blast into space. There, they strike gas previously shed by the star and heat it, which generates short-lived afterglows in many wavelengths, including visible light.

The study shows that dark bursts must be similar, except for the dusty patches in their host galaxies that obscure most of the light in their afterglows.

"Our study provides compelling evidence that a large fraction of star formation in the universe is hidden by dust in galaxies that do not appear otherwise dusty," Perley said. The stars thought to explode as gamma-ray bursts live fast and die young. Dark bursts may represent stars that never drifted far from the dusty clouds that formed them.

Gamma-ray bursts have been detected in infrared wavelengths as far out as 13.1 billion light-years. "If gamma-ray bursts were frequent 13 billion years ago -- less than a billion years after the universe formed -- we ought to be detecting large numbers of them," explained team member S. Bradley Cenko, also at UC Berkeley. "We don't, which indicates that the first stars formed at a less frenzied pace than some models suggested."

The astronomers conclude that less than about 7 percent of dark bursts can be occurring at such distances, and they propose radio and microwave observations of the new galaxies to better understand how their dusty regions block light. A paper on the findings has been submitted to The Astronomical Journal.

Swift is managed by NASA's Goddard Space Flight Center in Greenbelt, Md. It was built and is being operated in collaboration with Pennsylvania State University, the Los Alamos National Laboratory in New Mexico, and General Dynamics of Gilbert, Ariz., in the United States. International collaborators include the University of Leicester and Mullard Space Sciences Laboratory in the United Kingdom, Brera Observatory and the Italian Space Agency in Italy, and additional partners in Germany and Japan.