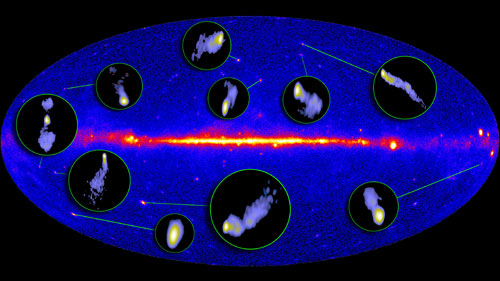 An international team of astronomers has used the world’s biggest radio telescope to look deep into the brightest galaxies that NASA’s Fermi Gamma-ray Space Telescope can see. The study solidifies the link between an active galaxy’s gamma-ray emissions and its powerful radio-emitting jets.

“Now we know for sure that the fastest, most compact, and brightest jets we see with radio telescopes are the ones that are able to kick light up to the highest energies,” said Yuri Kovalev, a team member at the Max Planck Institute for Radio Astronomy in Bonn, Germany. 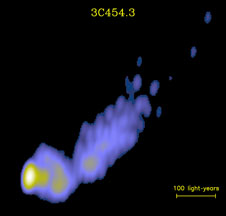 The blazar 3C 454.3 lies 7 billion light-years away. Nevertheless, VLBA observations detect details less than 100 light-years across in the galaxy’s innermost radio jet.
> View larger version Credit: NRAO/AUI/MOJAVE Team/Y. Kovalev The brightest galaxies Fermi sees are active galaxies, which emit oppositely directed jets of particles traveling near the speed of light. Some, called blazars, are especially bright because one of the jets happens to be directed toward us. Astronomers believe that these jets somehow arise as a consequence of matter falling into a massive black hole at the galaxy’s center, but the process is not well understood.

To peer into the jets, Kovalev and his colleagues used the National Science Foundation’s Very Long Baseline Array (VLBA), a set of ten radio telescopes located from Hawaii to St. Croix in the U.S. Virgin Islands and operated by the National Radio Astronomy Observatory. When the signals from these telescopes are combined, the array acts like a single enormous radio dish more than 5,300 miles across. The VLBA can resolve details about a million times smaller than Fermi can and 50 times smaller than any optical telescope.

The new findings are an outcome of the MOJAVE program, a long-term study of the jets from active galaxies using the VLBA. “We see the innermost few hundred light-years of these jets for even the most distant active galaxies seen by Fermi,” Kovalev noted.

For decades, astronomers have wondered about the nature of these radio-emitting jets. Hints that they also emit radiation at higher energies came from NASA’s Compton Gamma-Ray Observatory, which operated throughout the 1990s, and, more recently, from observations by NASA’s Chandra X-Ray Observatory. 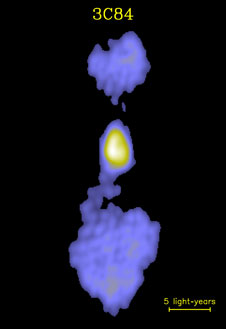 Kovalev and his colleagues also see a correlation between active galaxies with the brightest gamma-ray emission and those with the fastest jets. Because we see these jets nearly end on, and because the particles within the jets move close to the speed of light, the VLBA can study a phenomenon called “Doppler boosting.” This makes radio-emitting blobs look brighter and appear to move much faster that the speed of light.

The VLBA data show that the bigger the Doppler boost seen in a radio jet, the more likely it is that Fermi recorded it as a variable gamma-ray source. In addition, many objects found by Fermi to be extreme in gamma-rays are broadcasting strong bursts of radio emission at about the same time.

All this points to the team’s conclusion that the portion of an active galaxy’s radio jet closest to the galaxy’s core is also the source of the gamma-rays Fermi detects. The team’s findings appear in two papers to be published in the May 1 issue of The Astrophysical Journal Letters.

“For more than a decade, we have collected images of the brightest galaxies in the radio sky to study the changing structures of their jets,” said Matthew Lister, a professor at Purdue University and a member of the research team. Lister leads the MOJAVE program and is also a Fermi guest investigator. "We've waited a long time to compare our measurements with the findings in the gamma-ray sky -- and now, thanks to this state-of-the-art space observatory, we finally can."