This movie shows one cycle of pulsed gamma rays from the Vela pulsar as constructed from photons detected by Fermi's Large Area Telescope. The movie includes data from August 4 to Sept. 15, 2008. The bluer color in the latter part of the pulse indicates the presence of gamma rays with energies exceeding a billion electron volts. For comparison, visible light has energies between two and three electron volts. Credit: NASA/DOE/Fermi LAT Collaboration
> Watch movie
> View other resolutions With NASA's Fermi Gamma-ray Space Telescope, astronomers now are getting their best look at those whirling stellar cinders known as pulsars. In two studies published in the July 2 edition of Science Express, international teams have analyzed gamma-rays from two dozen pulsars, including 16 discovered by Fermi. Fermi is the first spacecraft able to identify pulsars by their gamma-ray emission alone.

A pulsar is the rapidly spinning and highly magnetized core left behind when a massive star explodes. Most of the 1,800 cataloged pulsars were found through their periodic radio emissions. Astronomers believe these pulses are caused by narrow, lighthouse-like radio beams emanating from the pulsar's magnetic poles.

"Fermi has truly unprecedented power for discovering and studying gamma-ray pulsars," said Paul Ray of the Naval Research Laboratory in Washington. "Since the demise of the Compton Gamma Ray Observatory a decade ago, we've wondered about the nature of unidentified gamma-ray sources it detected in our galaxy. These studies from Fermi lift the veil on many of them."

The Vela pulsar, which spins 11 times a second, is the brightest persistent source of gamma rays in the sky. Yet gamma rays -- the most energetic form of light -- are few and far between. Even Fermi's Large Area Telescope sees only about one gamma-ray photon from Vela every two minutes.

"That's about one photon for every thousand Vela rotations," said Marcus Ziegler, a member of the team reporting on the new pulsars at the University of California, Santa Cruz. "From the faintest pulsar we studied, we see only two gamma-ray photons a day."

Radio telescopes on Earth can detect a pulsar easily only if one of the narrow radio beams happens to swing our way. If not, the pulsar can remain hidden.

A pulsar's radio beams represent only a few parts per million of its total power, whereas its gamma rays account for 10 percent or more. Somehow, pulsars are able to accelerate particles to speeds near that of light. These particles emit a broad beam of gamma rays as they arc along curved magnetic field lines. 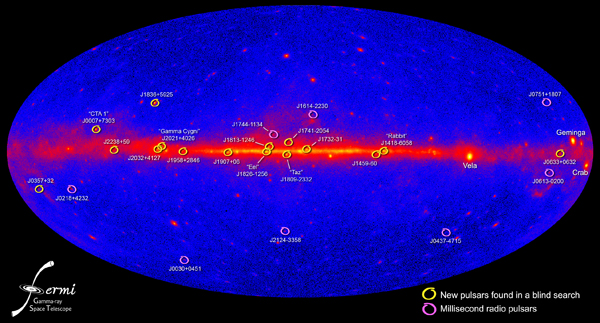 This all-sky map shows the positions and names of 16 new pulsars (yellow) and eight millisecond pulsars (magenta) studied using Fermi's LAT. The famous Vela, Crab, and Geminga pulsars (right) are the brightest ones Fermi sees. The pulsars Taz, Eel, and Rabbit have taken the nicknames of nebulae they are now known to power. The Gamma Cygni pulsar resides within a supernova remnant of the same name.
Credit: NASA/DOE/Fermi LAT Collaboration
> Larger image
> Larger image (unlabeled)

"Before launch, some predicted Fermi might uncover a handful of new pulsars during its mission," Ziegler added. "To discover 16 in its first five months of operation is really beyond our wildest dreams."

Like spinning tops, pulsars slow down as they lose energy. Eventually, they spin too slowly to power their characteristic emissions and become undetectable.

But pair a slowed dormant pulsar with a normal star, and a stream of stellar matter from the companion can spill onto the pulsar and increase its spin. At rotation periods between 100 and 1,000 times a second, ancient pulsars can resume the activity of their youth. In the second study, Fermi scientists examined gamma rays from eight of these "born-again" pulsars, all of which were previously discovered at radio wavelengths.

"Before Fermi launched, it wasn't clear that pulsars with millisecond periods could emit gamma rays at all," said Lucas Guillemot at the Center for Nuclear Studies in Gradignan, near Bordeaux, France. "Now we know they do. It's also clear that, despite their differences, both normal and millisecond pulsars share similar mechanisms for emitting gamma rays."

NASA's Fermi Gamma-ray Space Telescope is an astrophysics and particle physics partnership, developed in collaboration with the U.S. Department of Energy, along with important contributions from academic institutions and partners in France, Germany, Italy, Japan, Sweden, and the U.S. Francis Reddy
NASA's Goddard Space Flight Center
› Back To Top