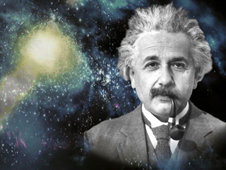 On May 10, 2009 a pair of gamma-ray photons reached the Fermi Gamma-Ray Space Telescope only 900 milliseconds apart after traveling for 7 billion years. Fermi’s measurement gives us rare experimental evidence that space-time is smooth as Einstein predicted, and has shut the door on several approaches to gravity where space-time is foamy enough to interfere strongly with light.
Credit: NASA/GSFC
› View video 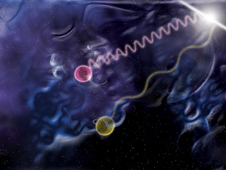 In this illustration, one photon (purple) carries a million times the energy of another (yellow). Some theorists predict travel delays for higher-energy photons, which interact more strongly with the proposed frothy nature of space-time. Yet Fermi data on two photons from a gamma-ray burst fail to show this effect, eliminating some approaches to a new theory of gravity. The animation link below shows the delay scientists had expected to observe. Credit: NASA/Sonoma State University/Aurore Simonnet
› Larger image
› View animation
› Other versions from SVS 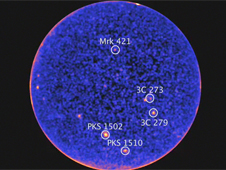 This view of the gamma-ray sky constructed from one year of Fermi LAT observations is the best view of the extreme universe to date. The map shows the rate at which the LAT detects gamma rays with energies above 300 million electron volts -- about 120 million times the energy of visible light -- from different sky directions. Brighter colors equal higher rates. Credit: NASA/DOE/Fermi LAT Collaboration
› Larger image
› Other versions from SVS Click here for multimedia related to the Oct. 28, 2009, NASA briefing on Fermi's findings.

It captured more than 1,000 discrete sources of gamma rays -- the highest-energy form of light. Capping these achievements was a measurement that provided rare experimental evidence about the very structure of space and time, unified as space-time in Einstein's theories.

"Physicists would like to replace Einstein's vision of gravity -- as expressed in his relativity theories -- with something that handles all fundamental forces," said Peter Michelson, principal investigator of Fermi's Large Area Telescope, or LAT, at Stanford University in Palo Alto, Calif. "There are many ideas, but few ways to test them."

Many approaches to new theories of gravity picture space-time as having a shifting, frothy structure at physical scales trillions of times smaller than an electron. Some models predict that the foamy aspect of space-time will cause higher-energy gamma rays to move slightly more slowly than photons at lower energy.

Such a model would violate Einstein's edict that all electromagnetic radiation -- radio waves, infrared, visible light, X-rays and gamma rays -- travels through a vacuum at the same speed.

On May 10, 2009, Fermi and other satellites detected a so-called short gamma ray burst, designated GRB 090510. Astronomers think this type of explosion happens when neutron stars collide. Ground-based studies show the event took place in a galaxy 7.3 billion light-years away. Of the many gamma ray photons Fermi's LAT detected from the 2.1-second burst, two possessed energies differing by a million times. Yet after traveling some seven billion years, the pair arrived just nine-tenths of a second apart.

"This measurement eliminates any approach to a new theory of gravity that predicts a strong energy dependent change in the speed of light," Michelson said. "To one part in 100 million billion, these two photons traveled at the same speed. Einstein still rules."

Blazars -- distant galaxies whose massive black holes emit fast-moving jets of matter toward us -- are by far the most prevalent source, now numbering more than 500. In our own galaxy, gamma ray sources include 46 pulsars and two binary systems where a neutron star rapidly orbits a hot, young star.

"The Fermi team did a great job commissioning the spacecraft and starting its science observations," said Jon Morse, Astrophysics Division director at NASA Headquarters in Washington. "And now Fermi is more than fulfilling its unique scientific promise for making novel, high-impact discoveries about the extreme universe and the fabric of space-time."‪

NASA's Fermi Gamma Ray Space Telescope is an astrophysics and particle physics partnership, developed in collaboration with the U.S. Department of Energy, along with important contributions from academic institutions and partners in France, Germany, Italy, Japan, Sweden and the United States.