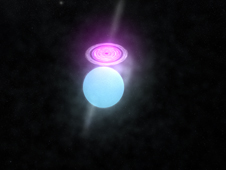 In Cygnus X-3, an accretion disk surrounding a black hole or neutron star orbits close to a hot, massive star. Gamma rays (purple, in this illustration) likely arise when fast-moving electrons above and below the disk collide with the star's ultraviolet light. Fermi sees more of this emission when the disk is on the far side of its orbit. Credit: NASA's Goddard Space Flight Center
› Larger image
› View movie
› Other versions from SVS 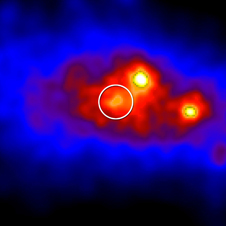 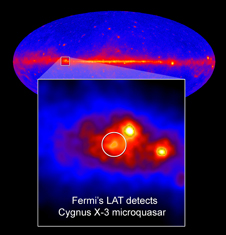 This image locates the view around Cygnus X-3 within Fermi's all-sky map. Credit: NASA/DOE/Fermi LAT Collaboration
› Larger image
› Unlabeled version NASA's Fermi Gamma-ray Space Telescope has made the first unambiguous detection of high-energy gamma-rays from an enigmatic binary system known as Cygnus X-3. The system pairs a hot, massive star with a compact object -- either a neutron star or a black hole -- that blasts twin radio-emitting jets of matter into space at more than half the speed of light.

Astronomers call these systems microquasars. Their properties -- strong emission across a broad range of wavelengths, rapid brightness changes, and radio jets -- resemble miniature versions of distant galaxies (called quasars and blazars) whose emissions are thought to be powered by enormous black holes.

"Cygnus X-3 is a genuine microquasar and it's the first for which we can prove high-energy gamma-ray emission," said Stéphane Corbel at Paris Diderot University in France.

The system, first detected in 1966 as among the sky's strongest X-ray sources, was also one of the earliest claimed gamma-ray sources. Efforts to confirm those observations helped spur the development of improved gamma-ray detectors, a legacy culminating in the Large Area Telescope (LAT) aboard Fermi.

At the center of Cygnus X-3 lies a massive Wolf-Rayet star. With a surface temperature of 180,000 degrees F, or about 17 times hotter than the sun, the star is so hot that its mass bleeds into space in the form of a powerful outflow called a stellar wind. "In just 100,000 years, this fast, dense wind removes as much mass from the Wolf-Rayet star as our sun contains," said Robin Corbet at the University of Maryland, Baltimore County.

Every 4.8 hours, a compact companion embedded in a disk of hot gas wheels around the star. "This object is most likely a black hole, but we can't yet rule out a neutron star," Corbet noted.

Fermi's LAT detects changes in Cygnus X-3's gamma-ray output related to the companion's 4.8-hour orbital motion. The brightest gamma-ray emission occurs when the disk is on the far side of its orbit. "This suggests that the gamma rays arise from interactions between rapidly moving electrons above and below the disk and the star's ultraviolet light," Corbel explained.

When ultraviolet photons strike particles moving at an appreciable fraction of the speed of light, the photons gain energy and become gamma rays. "The process works best when an energetic electron already heading toward Earth suffers a head-on collision with an ultraviolet photon," added Guillaume Dubus at the Laboratory for Astrophysics in Grenoble, France. "And this occurs most often when the disk is on the far side of its orbit."

Through processes not fully understood, some of the gas falling toward Cygnus X-3's compact object instead rushes outward in a pair of narrow, oppositely directed jets. Radio observations clock gas motion within these jets at more than half the speed of light.

Between Oct. 11 and Dec. 20, 2008, and again between June 8 and Aug. 2, 2009, Cygnus X-3 was unusually active. The team found that outbursts in the system's gamma-ray emission preceded flaring in the radio jet by roughly five days, strongly suggesting a relationship between the two.

The findings, published today in the electronic edition of Science, will provide new insight into how high-energy particles become accelerated and how they move through the jets.