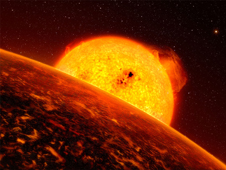 This artist's impression shows sunrise over CoRoT-7b, the smallest-known exoplanet. The world is about 70 percent larger than Earth. Now, a team led by Brian Jackson at NASA's Goddard Space Flight Center finds that the planet may be the rocky remains of a gas giant planet whose atmosphere was evaporated by close proximity to the star. Credit: ESO/L. Calçada
› Larger image Goddard Release No. 10-03

The most earthlike planet yet found around another star may be the rocky remains of a Saturn-sized gas giant, according to research presented today at the American Astronomical Society meeting in Washington.

"The first planets detected outside our solar system 15 years ago turned out to be enormous gas-giants in very tight orbits around their stars. We call them 'hot Jupiters,' and they weren't what astronomers expected to find," said Brian Jackson at NASA's Goddard Space Flight Center in Greenbelt, Md. "Now, we're beginning to see Earth-sized objects in similar orbits. Could there be a connection?"

Jackson and his colleagues turned to CoRoT-7b, the smallest planet and the most like Earth that astronomers have found to date. Discovered in February 2009 by the Convection, Rotation and Planetary Transits (CoRoT) satellite, a mission led by the French Space Agency, CoRoT-7b takes just 20.4 hours to circle its sunlike star, located 480 light-years away in the constellation Monoceros. Astronomers believe the star is about 1.5 billion years old, or about one-third the sun's age.

"CoRoT-7b is almost 60 times closer to its star than Earth, so the star appears almost 360 times larger than the sun does in our sky," Jackson said. As a consequence, the planet's surface experiences extreme heating that may reach 3,600 degrees Fahrenheit on the daylight side. CoRoT-7b's size (70 percent larger than Earth) and mass (4.8 times Earth's) indicate that the world is probably made of rocky materials.

"But with such a high dayside temperature, any rocky surface facing the star must be molten, and the planet cannot retain anything more than a tenuous atmosphere, even one of vaporized rock," Jackson said. He estimates that solar heating may have already cooked off several Earth masses of material from CoRoT-7b.

"There's a complex interplay between the mass the planet loses and its gravitational pull, which raises tides on the star," Jackson explained. Those tides gradually change the planet's orbit, drawing it inward in a process called tidal migration. But closer proximity to the star then increases the mass loss, which in turn slows the rate of orbital change.

After accounting for the give-and-take of mass loss and tidal migration, the team finds that CoRot-7b could have weighed in at 100 Earth masses -- or about the heft of Saturn -- when it first formed. At that time, it orbited 50 percent farther from its star than it does now.

The researchers also show that regardless of whether CoRot-7b started life as a Saturn-like gas giant or as a rocky world, the planet has probably lost many Earth masses of material since its formation.

"You could say that, one way or the other, this planet is disappearing before our eyes," Jackson said.

He suggests that similar processes likely have influenced many other exoplanets that lie close to their stars. In fact, several recent studies suggest that many hot Jupiters have undergone similar mass loss and tidal evolution, perhaps leaving behind remnant cores similar to CoRoT-7b.

"CoRoT-7b may be the first in a new class of planet -- evaporated remnant cores," Jackson said. "Studying the coupled processes of mass loss and migration may be crucial to unraveling the origins of the hundreds of hot, earthlike planets space missions like CoRoT and NASA's Kepler will soon uncover."