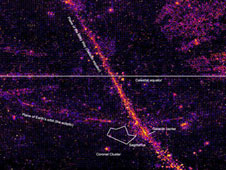 > Print resolution (labeled version)
> Print resolution (unlabeled version)
This map charts the most popular cosmic locations as measured by the number of SkyView image requests since June 2007. Brighter colors indicate more views. Credit: NASA/SkyView/Thomas McGlynn Some three million times a year, researchers, educators, and amateur astronomers all over the world ask NASA's SkyView virtual observatory to serve up images of some interesting corner of the cosmos. Since 1994, this digital archive has made access to and manipulation of celestial surveys its specialty. It boasts a full spectrum of data, ranging from radio to gamma-rays.

Many of the surveys hosted by SkyView are available through popular interactive tools like Google Sky and Microsoft's WorldWide Telescope (WWT). In fact, SkyView's most recently added survey -- the fourth data release from NASA's Galaxy Evolution Explorer satellite -- is available in WWT starting today.

SkyView visitors now generate an average of 300,000 images a month — up from 20,000 a month ten years ago. Over the same period, the average size of the requested images has quadrupled. So, in terms of pixels processed, SkyView's traffic has increased by more than 60 times.

SkyView originated as a way to help astronomers deal with the ever-increasing amount of survey data. It provides a single interface for accessing more than 36 surveys covering nearly 100 wavelength bands. Anyone can create an image without having to know the particular details of a survey's data format. Behind the scenes, SkyView handles all of the drudgery — transforming, precessing, rescaling, rotating, overlaying, and mosaicking data — so astronomers can get on with doing science.

"When we were collecting data for use in WorldWide Telescope, we found that almost every new data source required special custom code to adapt it to wide-scale visualization," says Jonathan Fay, WWT's architect at Microsoft Research in Redmond, Wash. "SkyView added support for our spherical all-sky projection, called TOAST. This was instrumental in helping us achieve our goal of making astronomy accessible to everyone." 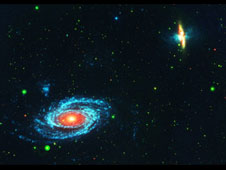 > Larger image
Ultraviolet radiation from hot, young stars lights up the galaxies M81 (left) and M82 in this composite. Credit: NASA/GALEX/DSS (STScI/Caltech/AURA) "SkyView has been used by WWT as an engine to convert a large number of surveys into its own format," says Thomas McGlynn, who heads the project at NASA's Goddard Space Flight Center in Greenbelt, Md. "We made it easy for WWT to have broad survey coverage."

Measuring SkyView's success is becoming more difficult. That's because users now can download and run the project's Java-based software on their own computer to directly access data. "We don't count these requests -- only those made through SkyView's website," McGlynn says.

Where are people looking? McGlynn mapped the positions of millions of SkyView requests since the project's June 2007 redesign. The result is a portrait of the sky's most popular targets. These naturally include regions of importance to professional astronomers, such as areas mapped by the Sloan Digital Sky Survey, sprawling molecular clouds in the constellations Orion and Taurus, and the locations of the Hubble Space Telescope's famous Deep Field and Ultra Deep Field images. Objects of wider appeal also appear, including the Milky Way, nearby satellite galaxies called the Magellanic Clouds, and the neighboring spiral galaxies M31 and M33.

"There remains a lot of structure whose origin is unclear," McGlynn notes. "For example, the plane of Earth's orbit, the ecliptic, shows up as an enhancement even though SkyView isn't intended for viewing solar system objects."

He speculates that people looking for asteroids and comets may be using SkyView to generate comparison images, seeing if the suspect object moves or disappears. But are they amateurs or professionals?

"At one time, I thought amateur astronomers accounted for about a third of SkyView's use," McGlynn says. "I'm less willing to guess at that now -- and what does it matter, anyway? SkyView is for everyone."