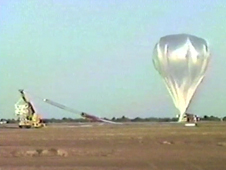 Watch GRIS being readied for launch at Alice Springs, Australia, on its fifth flight in 1992. Credit: NASA/GSFC/Steve Snodgrass
> Watch video 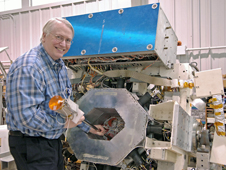 Jack Tueller, GRIS lead researcher, holds one of the seven germanium detectors that formed the heart of the instrument. In flight, the detectors were bathed in liquid nitrogen to maximize their sensitivity. Credit: NASA/GSFC/Debbie McCallum
> Larger image 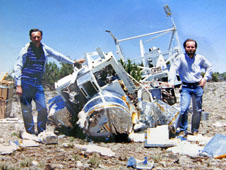 GRIS hit the ground hard following a New Mexico flight in 1990. Albert Hueters of Sandia National Laboratories (left) and Scott Barthelmy of NASA's Goddard Space Flight Center found the instrument in pieces. Rebuilding GRIS took two years. Credit: NASA/GSFC/Scott Barthelmy
> Larger image The instrument is in pieces now, but its legacy lives on. Twenty-one years ago this month, the balloon-borne Gamma-Ray Imaging Spectrometer (GRIS) made the first of nine trips into the stratosphere. Those voyages, totaling 223 hours of flight time, helped astronomers catch a glimpse of the high-energy universe.

But in its day, GRIS was state of the art. The instrument was built as a collaboration between NASA's Goddard Space Flight Center in Greenbelt, Md., Bell Laboratories in Murray Hill, N.J., and Sandia National Laboratories in Albuquerque, N.M. GRIS was designed to measure gamma rays -- the most energetic form of light -- with energies from 20,000 to 8 million electron volts. (For comparison, visible light has energies between about 2 and 3 electron volts.) To sense the radiation, GRIS carried the world's largest, high-purity germanium detectors. They were cooled by liquid nitrogen to maximize their sensitivity and remained at a frosty -322 degrees Fahrenheit throughout each flight.

On February 23, 1987, a star exploded in the Large Magellanic Cloud, a small galaxy that orbits our own some 170,000 light-years away. Dubbed SN 1987A, the explosion is the closest stellar blast since the invention of the telescope and is now the best-studied event of its kind. On a rushed maiden voyage in May 1988, GRIS gave astronomers much-sought information about the supernova.

The GRIS detectors easily resolved gamma rays from the decay of cobalt-56, one of many radioactive elements produced in the explosion. As some of these gamma rays interact with gas atoms in the cloud, they help keep the debris hot and bright as it expands. "This was the first solid proof of modern-day nucleosynthesis -- the process that makes the chemical elements beyond helium in stars," said GRIS team member Scott Barthelmy at Goddard.

"Unlike other forms of light, gamma rays could uniquely measure the velocities in the expanding supernova without confusion from other effects, such as scattering," said Jack Tueller, the lead scientist for GRIS. Some of those effects make it difficult to interpret what's happening. "The gamma-rays that reached GRIS told us we could trust what the infrared studies seemed to indicate, that SN 1987A was not a spherically symmetric explosion."

That first flight also showed an increase in gamma rays from the center or our own galaxy. When electrons and their antiparticles, positrons, collide, they release gamma rays at a characteristic energy of 511,000 electron volts. GRIS detected this radiation from the galactic center at stronger levels than had been seen since the late 1970s.

For these discoveries, Tueller and Bonnard Teegarden won the 1991 John C. Lindsay Memorial Award for Space Science. The award is presented to Goddard civil servants who best exhibit the qualities of broad scientific accomplishments in the field.

Other GRIS targets include the Crab Nebula supernova remnant, the high-mass X-ray binary systems Cygnus X-1 and Vela X-1, and the active galaxies NGC 4151 and NGC 1068. GRIS also measured gamma-rays from another important radioactive substance: Aluminum-26. This isotope forms in massive stars near the ends of their lives and is cast into the galaxy when they explode. Because its half-life is only 730,000 years, aluminum-26 provides a means to trace massive stars and their supernova remnants throughout the galaxy.

GRIS generally flew out of Alice Springs, Australia, and, more rarely, Fort Sumner, N.M., with the assistance of NASA's Columbia Scientific Ballooning Facility. Based in Palestine, Texas, the organization provides launch, tracking, and instrument recovery services for NASA centers and universities all over the world.

"Scientific balloons offer a fast, flexible and low-cost method of doing science in many fields," said Stephen Derdeyn, a GRIS team member and long-time balloon payload mechanical engineer at Goddard. Balloons can loft instruments high above much of the atmosphere's interfering effects, typically to altitudes of about 120,000 feet. That's more than four times the height of Mount Everest. Flights can be arranged in a few months, which make it possible to fly several missions each year and allows instruments to take advantage of the latest technology.

Compared to the costs of launching a satellite, balloon flights are a genuine bargain. And unlike satellites and other rocket-launched payloads, balloon-borne instruments return in good condition -- most of the time. Instruments can be re-flown or improved upon. Balloon missions serve as a test bed for future space-based technology, and they provide an excellent training ground for scientists and engineers.

But, as with any other form of flight, scientific ballooning has its trials. "On launch day, the flight crew tries to predict the wind direction at lift off," Derdeyn explained. If the weather looks good, the flight crew lays out the flight train -- the tether that attaches the instrument gondola, the recovery parachute, and the balloon itself -- along the predicted wind direction. "This can take a while, and it may require up to another hour to fill the balloon with helium," he said. "If the winds shift in that time, there can be trouble."

That happened during one of the Alice Springs launch attempts in 1992. Just before liftoff, the winds switched direction, twisting the balloon's enormous polyethylene envelope. Acting as a giant sail, the gyrating balloon damaged the launch vehicles and threatened to harm GRIS itself until a remote destruct command ruptured the envelope. "It was an exciting and worrisome event, but GRIS came through unscathed," Barthelmy recalled.

On better days, the flight crew inflates the balloon until it contains the desired amount of helium. When released, the balloon rises to its full height as the crew maneuvers a launch vehicle carrying the instrument gondola. When the gondola is almost directly beneath the balloon, the payload is released and the balloon and its cargo ascend to their float altitude, where the scientific work begins.

Winds can make recovery problematic, too. At the end of a flight, a command from the ground separates the balloon from the instrument gondola, which then descends on a parachute. During a 1990 flight from Fort Sumner, surface winds gave GRIS so much horizontal speed that the impact with the ground wrenched the instrument from its gondola. The scientists found GRIS in pieces. Rebuilding it took two years.

"GRIS was very versatile and robust instrument," said Chris Miller, another GRIS team member at Goddard. "We changed its configuration multiple times over the years as its science mission evolved, adding various devices in front of the detectors, such as collimators, a wide-field shield, and a blocking shield."

The GRIS gondola was built strong enough to survive multiple flights and landings in a single field campaign, as in the 1995 Alice Springs campaign where GRIS flew three times. The gondola also let other instruments ride piggyback. On the final flight of the 1995 campaign, which turned out to be GRIS' last mission, the team was able to modify and reconfigure the instrument to include a piggyback prototype detector inside the GRIS shield. "This was a totally unplanned configuration completed under adverse conditions in the middle of the Australian outback," Barthelmy said.

That last flight didn't end the instrument's contributions to astrophysics. In 2001, the GRIS gondola structure was borrowed for a test flight of the Gamma-ray Burst Monitors now in use on the Fermi Gamma-ray Space Telescope. The same year, a new balloon program called InFOCuS -- developed by the same Goddard group responsible for GRIS -- lofted an ambitious 35-foot-long X-ray telescope that pointed to its celestial targets using the same system employed by GRIS. After four flights, the InFOCuS instrument is now being redesigned for improved pointing accuracy, but it still bears many GRIS components.