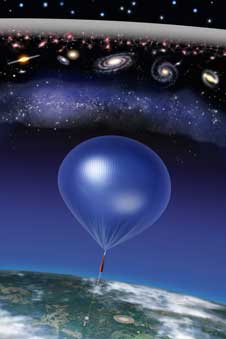 
The finding comes from a balloon-borne instrument named ARCADE, which stands for the Absolute Radiometer for Cosmology, Astrophysics, and Diffuse Emission. In July 2006, the instrument launched from NASA's Columbia Scientific Balloon Facility in Palestine, Texas, and flew to an altitude of 120,000 feet, where the atmosphere thins into the vacuum of space.


ARCADE's mission was to search the sky for heat from the first generation of stars. Instead, it found a cosmic puzzle.


"The universe really threw us a curve," Kogut says. "Instead of the faint signal we hoped to find, here was this booming noise six times louder than anyone had predicted." Detailed analysis ruled out an origin from primordial stars or from known radio sources, including gas in the outermost halo of our own galaxy. The source of this cosmic radio background remains a mystery.


Many objects in the universe emit radio waves. In 1931, American physicist Karl Jansky first detected radio static from our own Milky Way galaxy. Similar emission from other galaxies creates a background hiss of radio noise.


The problem, notes team member Dale Fixsen of the University of Maryland at College Park, is that there don't appear to be enough radio galaxies to account for the signal ARCADE detected. "You'd have to pack them into the universe like sardines," he says. "There wouldn't be any space left between one galaxy and the next."

> Larger image
ARCADE viewed about 7 percent of the sky. The observed region is colored on this all-sky radio map. The plane of our galaxy, the Milky Way, runs across the center. Credit: NASA/ARCADE The sought-for signal from the earliest stars remains hidden behind the newly detected cosmic radio background. This noise complicates efforts to detect the very first stars, which are thought to have formed about 13 billion years ago -- not long, in cosmic terms, after the Big Bang. Nevertheless, this cosmic static may provide important clues to the development of galaxies when the universe was less than half its present age. Unlocking its origins should provide new insight into the development of radio sources in the early universe.


"This is what makes science so exciting," says Michael Seiffert, a team member at NASA's Jet Propulsion Laboratory in Pasadena, Calif. "You start out on a path to measure something -- in this case, the heat from the very first stars -- but run into something else entirely, something unexplained." 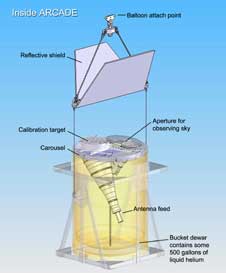 > Larger image
> Hi resolution unlabeled version
ARCADE's revolutionary design makes it super-sensitive to cosmic noise. Chilled to 2.7 degrees above absolute zero by immersion into more than 500 gallons of liquid helium, each of ARCADE's seven radiometers alternately views the sky and a calibration target. Credit: NASA/ARCADE Seiffert and Kogut announced the findings today at the 213th meeting of the American Astronomical Society in Long Beach, Calif. Four papers describing ARCADE's results have been submitted to The Astrophysical Journal.


ARCADE is the first instrument to measure the radio sky with enough precision to detect this mysterious signal. To enhance the sensitivity of ARCADE's radio receivers, they were immersed in more than 500 gallons of ultra-cold liquid helium. The instrument's operating temperature was just 2.7 degrees above absolute zero.

The NASA-funded project includes scientists and engineers from NASA's Goddard Space Flight Center in Greenbelt, Md.; the Jet Propulsion Laboratory in Pasadena, Calif.; the University of California at Santa Barbara; the University of Maryland; and Brazil's National Institute for Space Research. More than a dozen high school and undergraduate students participated in the payload's development. 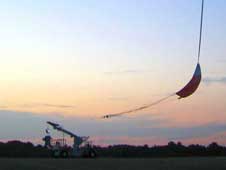 > Full view image
ARCADE launches on its July 2006 discovery flight from NASA's Columbia Scientific Balloon Facility in Palestine, Texas. The balloon lofted the instrument to its observation altitude of 120,000 feet. Credit: NASA/ARCADE The balloon flight was conducted under the auspices of the Balloon Program Office at Wallops Flight Facility by the staff of the Columbia Scientific Balloon Facility.