Hot gas in moving galaxy clusters (white spots) shifts the temperature of cosmic microwaves. Hundreds of distant clusters seem to be moving toward one patch of sky (purple ellipse). Credit: NASA/WMAP/A. Kashlinsky et al.
> Larger image WASHINGTON -- Using data from NASA's Wilkinson Microwave Anisotropy Probe (WMAP), scientists have identified an unexpected motion in distant galaxy clusters. The cause, they suggest, is the gravitational attraction of matter that lies beyond the observable universe.

"The clusters show a small but measurable velocity that is independent of the universe's expansion and does not change as distances increase," says lead researcher Alexander Kashlinsky at NASA's Goddard Space Flight Center in Greenbelt, Md. "We never expected to find anything like this."

Kashlinsky calls this collective motion a "dark flow" in the vein of more familiar cosmological mysteries: dark energy and dark matter. "The distribution of matter in the observed universe cannot account for this motion," he says.

Hot X-ray-emitting gas in a galaxy cluster scatters photons from the cosmic microwave background. Clusters don't precisely follow the expansion of space, so the wavelengths of scattered photons change in a way that reflects each cluster's individual motion.

This results in a minute shift of the microwave background's temperature in the cluster's direction. Astronomers refer to this change as the kinematic Sunyaev-Zel'dovich (SZ) effect.

A related distortion, known as the thermal SZ effect, has been observed in galaxy clusters since the 1980s. But the kinematic version is less than one-tenth as strong and has not been detected in any cluster. 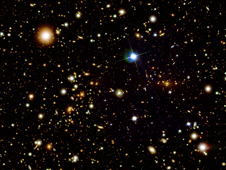 The galaxy cluster 1E 0657-56 (known as the Bullet Cluster) lies 3.8 billion light-years away. It's one of hundreds that appear to be carried along by a mysterious cosmic flow. Credit: NASA/STScI/Magellan/U.Arizona/D.Clowe et al.
> Larger image In 2000, Kashlinsky and Fernando Atrio-Barandela from the University of Salamanca, Spain, showed that astronomers could, in essence, amplify the effect isolating the kinematic SZ term. The trick, they found, is to study large numbers of clusters.

The astronomers teamed up with Dale Kocevski at the University of California, Davis, and Harald Ebeling from the University of Hawaii to identify some 700 X-ray clusters that could be used to find the subtle spectral shift. This sample includes objects up to 6 billion light-years -- or nearly half of the observable universe -- away.

Using the cluster catalog and WMAP's three-year view of the microwave background, the astronomers detected bulk cluster motions of nearly 2 million miles per hour. The clusters are heading toward a 20-degree patch of sky between the constellations of Centaurus and Vela.

What's more, this motion is constant out to at least a billion light-years. "Because the dark flow already extends so far, it likely extends across the visible universe," Kashlinsky says.

The finding flies in the face of predictions from standard cosmological models, which describe such motions as decreasing at ever greater distances. 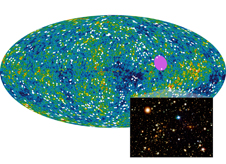 Galaxy clusters like 1E 0657-56 (inset) seem to be drifting toward a 20-degree-wide patch of sky (ellipse) between the constellations of Centaurus and Vela. Credit: NASA/WMAP/A. Kashlinsky et al.
> Larger image Cosmologists view the microwave background - a flash of light emitted 380,000 years after the big bang - as the universe's ultimate reference frame. Relative to it, all large-scale motion should show no preferred direction.

Big-bang models that include a feature called inflation offer a possible explanation for the flow. Inflation is a brief hyper-expansion early in the universe's history. If inflation did occur, then the universe we can see is only a small portion of the whole cosmos.

WMAP data released in 2006 support the idea that our universe experienced inflation. Kashlinsky and his team suggest that their clusters are responding to the gravitational attraction of matter that was pushed far beyond the observable universe by inflation. "This measurement may give us a way to explore the state of the cosmos before inflation occurred," he says.

The next step is to narrow down uncertainties in the measurements. "We need a more accurate accounting of how the million-degree gas in these galaxy clusters is distributed," says Atrio-Barandela.

"We’re assembling an even larger and deeper catalog of X-ray clusters to better measure the flow," Ebeling adds. The researchers also plan to extend their analysis by using the latest WMAP results, released in March.

The result will appear in the October 20 edition of Astrophysical Journal Letters, which is available electronically this week.