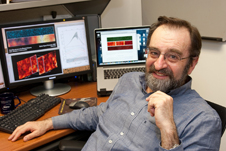 NASA is a partner in the Euclid mission, a space telescope designed to probe the mysteries of dark energy and dark matter. Euclid is currently scheduled to launch in 2020.

The Goddard team is led by Alexander Kashlinsky, an astrophysicist with Science Systems and Applications, Inc., in Lanham, Md. The group plans to use Euclid imaging data to explore the cosmic infrared background (CIB), the collective light emitted throughout cosmic history by all sources, including those that cannot be detected directly.

According to theoretical models, the early universe was dark and featureless until the first stars formed. When these stars died, they exploded as supernovae or collapsed into black holes, initiating changes that culminated in the diverse and complex cosmos we observe around us today. Each modification left its imprint in the CIB.

The project, named LIBRAE (Looking at Infrared Background Radiation Anisotropies with Euclid), will provide insight into stellar and galactic populations in the early universe that are unobtainable by other means.

"With LIBRAE, we hope to probe the distribution of early CIB source populations with high precision at scales as small as one arcminute to tens of degrees," Kashlinsky explained. "In addition, we will identify the cosmic times where these populations existed and determine what portion of the CIB was generated by stars and what fraction was produced by black holes."

Kashlinsky will be joined by Harvey Moseley of Goddard and Richard Arendt of the University of Maryland Baltimore County. All three work in the Laboratory for Observational Cosmology at Goddard.

Other members include Volker Bromm at the University of Texas in Austin, Matthew Ashby at the Harvard-Smithsonian Center for Astrophysics in Cambridge, Mass., and Günther Hasinger at the Institute for Astronomy in Honolulu. Three European collaborators currently round out the international LIBRAE team. 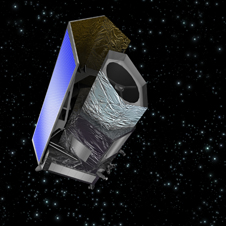 The Euclid spacecraft, shown in this artist's impression, is scheduled to launch in 2020. Credit: ESA/C. Carreau
› Larger image "Euclid's visible and infrared all-sky survey is perfectly suited to the LIBRAE studies of the early universe. We are very pleased to be joining the excellent team that has developed this mission," Moseley said.

The other two U.S. science teams are led by Ranga-Ram Chary of the Infrared Processing and Analysis Center at the California Institute of Technology in Pasadena, Calif., and Jason Rhodes of NASA's Jet Propulsion Laboratory, also in Pasadena.

Euclid will observe up to two billion galaxies occupying more than one-third of the sky with the goal of better understanding the contents of our universe.

The matter we interact with every day -- tables, chairs, people, Earth -- makes up less than five percent of our cosmos. According to current understanding, a mysterious substance called dark matter constitutes 24 percent of the matter in the universe. Dark matter is invisible, neither emitting nor absorbing light, but it exerts a gravitational pull.

Something even more enigmatic, dark energy, makes up about 73 percent of the universe. While dark matter attracts through gravity, dark energy is thought to exert a repulsive force that pushes matter apart. Scientists think dark energy may be responsible for expanding our universe at ever-increasing speeds, an observation that earned the 2011 Nobel Prize in physics.

The primary goal of Euclid's mission is to understand the nature of dark energy and dark matter by accurately measuring the accelerated expansion of the universe through several independent methods.

Euclid is a European Space Agency mission with science instruments and data analysis provided by the Euclid Consortium with important participation from NASA. NASA's Euclid Project Office is based at NASA's Jet Propulsion Laboratory in Pasadena, Calif. JPL will contribute the infrared flight detectors for one of Euclid's two science instruments. NASA Goddard will assist with infrared detector characterization and will perform detailed testing on flight detectors prior to delivery. Three U.S. science teams, led by JPL, Goddard and the Infrared Processing and Analysis Center at Caltech, will contribute to science planning and data analysis. Caltech manages JPL for NASA.