Who Invented the Aeroplane? 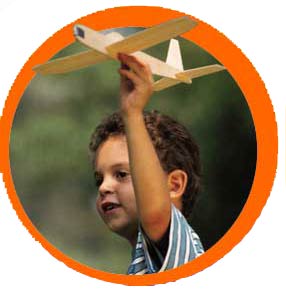 When you think of the first airplane, who do you think about? Most people think about Orville and Wilbur Wright. And, December 17, 1903 is the day to remember. That was the day that Orville won the toss of the coin. He made the first successful powered flight in history! The place was Kitty Hawk, North Carolina. The Wright Brothers' dream of inventing a flying machine had come true.

It all started when Orville was 7 and Wilbur was 11 years old. Their father, Bishop Milton Wright, gave them a toy helicopter. It really flew. That toy made them dream of flying. Their parents helped them go after their dreams. Their mother, Susan K. Wright, was good with mechanical things. She went to college in Indiana. Very few women went to college at that time. She was very good in both math and science classes. Her boys learned a lot from her.

The boys still wanted to know about flight as they grew up. They read everything they could find about it. They studied what other people learned about flight. The Wright Brothers also went into the printing business. They even printed a four-page newspaper. Then, people started riding bicycles. So, the brothers opened a bicycle repair shop. Their shop opened in Dayton, Ohio. It wasn't long before they were making their own bikes. But, they still wanted to fly.

By 1900, the Wright Brothers were ready to test their first glider. It was like a kite. They studied the best place to fly. They picked a sandy spot in Kitty Hawk, North Carolina. They camped out there. Between 1901 and 1903, they went back and forth between Dayton and Kitty Hawk. They were getting closer to flying. Finally, on December 17, 1903, the time had come.

That day, they flew four times. Orville flew the Wright Flyer the first time. That flight lasted 12 seconds. It went 120 feet. Their second and third flights went up about 175 feet each. Wilbur flew the fourth flight of the day. It went 859 feet. It took 59 seconds. After that last flight, the wind blew very hard. It blew the Flyer across the sand. The plane was too smashed up to fly again. They sent the good news about the flight to their father. They then packed their gear to head home in time for Christmas.

The Wright Brothers kept studying and testing new designs. They wanted to make their Flyer better. They began to teach others to fly. They even opened their own flying school. The brothers became rich and famous. Everything was going well for them. Sadly, in May 1912, Wilbur died from typhoid fever.

Orville was 77 when he died. He died while trying to fix his doorbell. Orville had led a good life. He had traveled all over the world to meet with famous people. Even though he was so successful, Orville was still an ordinary guy. It is almost 100 years since that first flight. It is only right to honor the Wright Brothers, as the Centennial of Flight comes near. We honor Orville and Wilbur for making the dream of flight come true. And, for forever changing our world.