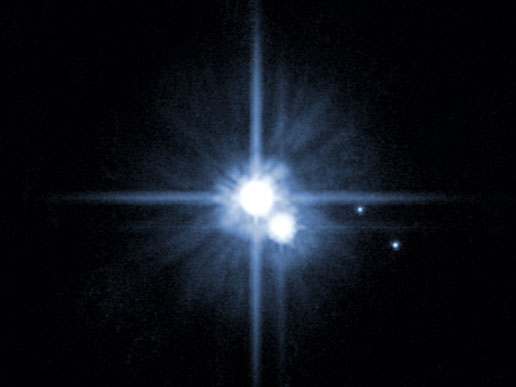 Image above: Pluto, center and it's previously known moon Charon, below Pluto and right of center, shine brightly. Two newly discovered moons appear more faintly to the right of the pair. Credit: NASA

Anxiously awaited follow-up observations with NASA's Hubble Space Telescope have confirmed the presence of two new moons around the distant planet Pluto. The moons were first discovered by Hubble in May 2005, but the science team probed even deeper into the Pluto system last week to look for additional satellites and to characterize the orbits of the moons.

Though the team had little doubt the moons are real, they were happy to see the moons show up very close to the locations predicted from the earlier Hubble observations. The initial discovery is being reported today in this week’s edition of the British science journal Nature.

The confirmation reinforces the emerging view that the Kuiper Belt, a swarm of icy bodies encircling the solar system beyond Neptune, may be more complex and dynamic than astronomers once thought. Pluto resides inside the Kuiper Belt and is about 3 billion miles from the Sun. Pluto was discovered in 1930.

The moons’ orbits are in the same plane as the orbit of the much larger satellite Charon (discovered in 1978). This likely means the moons were not captured, but instead were born, along with Charon, in what is commonly theorized to have been a titanic collision between two Pluto-sized objects over 4 billion years ago.

A team of astronomers, led by Hal Weaver of the Johns Hopkins Applied Physics Laboratory in Laurel, Md., and Alan Stern of the Southwest Research Institute in Boulder, Colo., made the new observations on Feb. 15, 2006, with Hubble’s Advanced Camera for Surveys (ACS).

The team used the sharp vision of the ACS to do a targeted search of the region around and inside the orbits of the twin moons. In addition to confirming the reality of the new moons, the observations also rule out the possibility of other satellites of roughly similar size orbiting Pluto inside the orbits of the two moons. The moons, provisionally designated S/2005 P 1 and S/2005 P 2, are approximately 40,000 and 30,000 miles away from Pluto, respectively.

Astronomers believe that the formation of the Pluto system is similar to that of our Earth and Moon. In both cases a comparable-sized body slammed into the parent planet. Simulations show that debris from the collision would go into an orbit around the planet and coalesce to form one or more satellites. Investigating how Pluto ended up with three moons while the Earth has one only should yield valuable insights into the processes by which satellite systems form around planets.

The team will use Hubble again on March 2 to study the new moons. They hope the follow-up observations will provide information on the moons’ color, as well as their size and shape, which could yield further clues about the formation and evolution of the Pluto system.

NASA's New Horizons mission to Pluto launched in January and is due to reach its distant destination in 2015.
› Back To Top