Hubble Survey Finds Missing Link in Planet Formation
Step 1 in the Universe's planet-making recipe: Take light and fluffy stardust, condense to rocks. It's the "condense to rocks" part scientists have been eager to see. Like making a pizza, a cloud of stardust has to go from a blob to a relatively flat disk to form a new star and planet system.

Scientists using the Hubble Space Telescope have observed the first part of this key phase in planet formation, where the disk of dust and gas surrounding a newborn star becomes flatter and denser, allowing matter in the disk to clump together into planetary building blocks. 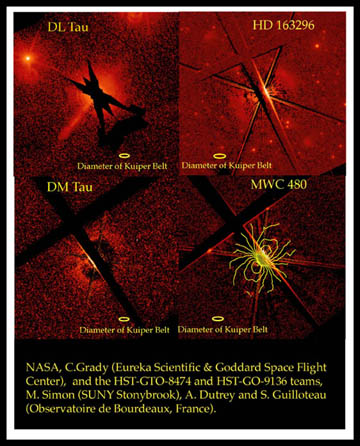 Dark Ages in Protoplanetary Disks: Hubble Space Telescope (HST) white-light coronagraphic images of circumstellar disks around 4 young stars are shown in false color. All of these disks had previously been resolved with radio telescopes (millimeter wavelengths), demonstrating the presence of large disks. Despite similarities in the radio data, in the optical, as seen by HST's Space Telescope Imaging Spectrograph, some of the disks are bright (DL Tau), while others are at least a factor of 100 darker (MWC 480), and other disks are dark near the star, while having faint, outer rings of brighter material (HD 163296 and DM Tau). Dark disks are believed to be flatter and denser than bright disks. To put these disks into context, the small ovals show the size of the classical Kuiper Belt (a swarm of icy planetismals orbiting our Sun at about 50 times the Earth-Sun distance) at the distance of each of these stars. For more information about this image, refer to the detailed caption at the end of this article. Image Credit: NASA, C. Grady, and the HST GTO 8474 and HST GO 9136 teams, M. Simon, A. Dutrey, and S. Guilloteau Click here for a 6.5 MB print-resolution image
"To make planets, material in the disk around a young star has to go from light and fluffy to rocks," said Dr. Carol Grady of Eureka Scientific and NASA's Goddard Space Flight Center, Greenbelt, Md., lead author of two papers on this research to be presented January 10 during the American Astronomical Society's 205th national meeting at the Town and Country Resort and Conference Center, 500 Hotel Circle North, San Diego, Calif. "To form rocks in the disk, dust grains comprising the disk have to grow larger and become more concentrated so they start to stick together. We believe we are seeing this happen in this Hubble survey."

The survey, "The Space Telescope Imaging Spectrograph Coronagraphic Survey of Pre-Main Sequence Stars," observed disks of dust and gas around relatively young stars, those with approximate ages of less than ten million years (lifetimes of all but the most massive stars are measured in billions of years). 25 nearby stars were observed during the survey, at distances between about 212 to 685 light-years from Earth. (A light-year, the distance light travels in a year, is almost six trillion miles or nearly 9.6 trillion kilometers.)

Astronomers believe stars and planets form when a large cloud of gas and dust in interstellar space collapses under its own gravity. As the cloud collapses, the central region forms a star as it becomes increasingly dense, causing the pressure and temperature to rise to the point where atoms in this region fuse together. The remaining matter in the cloud swirls around the star, pulled by the star's gravity. The swirling motion of this material eventually causes it to form a disk around the star, similar to the way a chef spins a blob of dough to make a pizza. When matter in this disk becomes sufficiently concentrated, it sticks together in clumps, which coalesce under their own gravity to form planets.

The disk is not perfectly flat, however. Since most of the matter in the original cloud is now concentrated in the star, gravity is strongest there. Disk matter in the region close to the star gets rapidly pulled toward the plane of the disk by the star's strong gravity. This concentrates the material and gives the region of the disk near the star a thin cross section. Further away from the star, gravity is weaker, and matter falls toward the disk plane more slowly. Matter in these regions is consequently more diffuse, giving regions of the disk far from the star a thick cross section. The overall effect makes the disk flared at the edges, like a donut with a thin membrane instead of a hole in the middle.

Disk matter needs to become settled -- densely concentrated near the plane of the disk -- to allow planets to form. As matter in the disk falls toward the plane of the disk, the flare should become less pronounced. This is what researchers in the new Hubble survey believe they are seeing. In the survey, seven stars had bright disks, two stars had dim disks; and the remainder had disks which did not appear at all, even though they are known to exist from other observations. The researchers believe the bright disks are relatively unsettled ones with flared edges. The flared edges act like the mirror in a flashlight -- in the same way that the bowl-shaped flashlight mirror reflects light from the bulb in the middle, a flared disk scatters more light from the central star than a flat disk. As matter settles in the disk, the edges become less flared as the disk becomes flatter and denser. These disks appear darker in the survey because they no longer have the flared edges to scatter light from the central star, according to the team.

Some disks do not show up at all in the Hubble survey images, but the researchers know they are there from other observations, such as radio telescope images that reveal the presence of a disk of large dust grains around some of these stars. "We believe that the disk has to become flat and dense to allow the dust grains to grow by sticking together, so disks with large dust grains that also appear dark in our survey supports our interpretation that we are seeing the disks become more concentrated," said Grady. The researchers caution that certain disks in the survey may not be truly dark, but might instead be so small that the coronagraphic wedge in the imaging spectrograph instrument, which blocks direct light from the target star so its much dimmer disk can be seen, simply blocks the disks from view.

The team's interpretation is further supported by a trend in the survey -- more of the disks around older stars are dark. This is expected if the disks are becoming more flat and dense over time. However, there are exceptions. The team observed some bright disks with cavities in their inner regions known from other observations. The presence of a cavity in the disk suggests planets are forming there and sweeping up the dust. This does not really contradict their interpretation, according to the team, since Hubble's resolution is sufficient only to observe the outer part of the disk. "We think the settling of the disk is likely to proceed from the inner, higher-density part of the disk outward. We would not be surprised to see some disks that had planet-formation activity in their inner regions while their outer regions were still flared," said Grady. Eventually, the team hopes future telescopes with better resolution than Hubble, like NASA's Terrestrial Planet Finder mission, will allow them to follow up with observations of the inner region of these disks.

The survey observations support the theory that disk concentration is a necessary step in planet formation, but the specifics appear different. Astronomers originally expected that the large dust grains would settle first, followed by smaller grains, then the gas. However, the Hubble observations revealed it was "all or nothing," according to Grady. That is, the team did not see some flared disks with large grains, other flared disks with smaller grains, and flared disks of gas. Either a disk had a flare with everything in it, or it had no flare at all. It may be that after the large grains settle, they no longer block light from the central star, which causes the smaller grains and the gas to vanish. "The small grains go solar sailing out of the system, pushed by pressure from the star's light, which also breaks down the gas molecules," said Grady.

The research was funded by NASA. The team includes Grady and the following researchers:

Detailed image caption: Hubble Space Telescope (HST) white-light coronagraphic images of circumstellar disks around 4 young stars are shown in false color. All of these disks had previously been resolved with radio telescopes (millimeter wavelengths), demonstrating the presence of large disks. Despite similarities in the radio data, in the optical, as seen by HST's Space Telescope Imaging Spectrograph, some of the disks are bright (DL Tau), while others are at least a factor of 100 darker (MWC 480), and other disks are dark near the star, while having faint, outer rings of brighter material (HD 163296 and DM Tau). Dark disks are believed to be flatter and denser than bright disks. To put these disks into context, the small ovals show the size of the classical Kuiper Belt (a swarm of icy planetismals orbiting our Sun at about 50 times the Earth-Sun distance) at the distance of each of these stars.

MWC 480's disk is not detected by HST/STIS. However, a disk is known to be there: here we show the contours of carbon monoxide (CO) emissions in the disk, taken with a radio telescope (Institut de Radio Astronomie Millimétrique (IRAM)) (courtesy M. Simon (SUNY-Stony Brook)), superposed on the STIS image.

For DL Tau, HD 163296, and DM Tau, the millimeter disk is in good agreement with the size, orientation on the sky, and aspect ratio of the optical disk.

The presence of bipolar jets (DL Tau), chains of emission line knots (HD 163296) and excess light associated with accretion of material onto the star, sampled in the Far-Ultraviolet by the Far Ultraviolet Spectrographic Explorer (FUSE) (HD 163296, MWC 480) demonstrate that in 3 of these stars, disk material extends in to the immediate vicinity of the star. Under these circumstances, the dark zones are likely to represent portions of the disks where dust grains have grown to the point that they have begun to settle toward the disk mid-plane, an expected first-step toward planet formation. DM Tau may have taken this process further than the other systems, since no jet is seen in the STIS data, and analysis of the infrared spectrum by Bergin et al. (2004, ApJ 614, L133) suggests that there is a terrestrial planet region-sized cavity in its inner disk.

Orientation: each star is shown with N up and E to the left.

Funny black voids: regions where the STIS coronagraphic wedges block our view of the sky, or where field stars in the template observations used to remove the stellar diffracted and scattered light are located.

Bill Steigerwald
› Back To Top