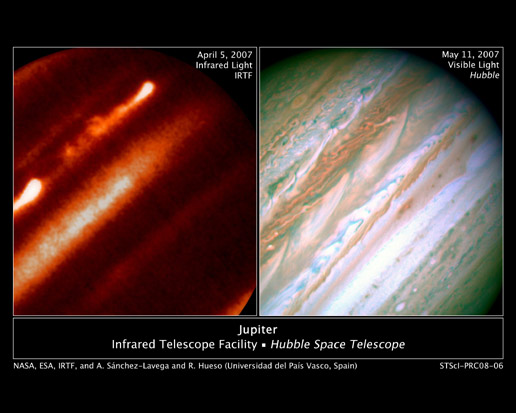 Detailed analysis of two continent-sized storms that erupted in Jupiter's atmosphere in March 2007 shows that Jupiter's internal heat plays a significant role in generating atmospheric disturbances. Understanding this outbreak could be the key to unlock the mysteries buried in the deep Jovian atmosphere, say astronomers.

Understanding these phenomena is important for Earth's meteorology where storms are present everywhere and jet streams dominate the atmospheric circulation. Jupiter is a natural laboratory where atmospheric scientists study the nature and interplay of the intense jets and severe atmospheric phenomena.

An international team coordinated by Agustin Sánchez-Lavega from the Universidad del País Vasco in Spain presents its findings about this event in the January 24 issue of the journal Nature.

The team monitored the new eruption of cloud activity and its evolution with an unprecedented resolution using NASA's Hubble Space Telescope, the NASA Infrared Telescope Facility in Hawaii, and telescopes in the Canary Islands (Spain). A network of smaller telescopes around the world also supported these observations.

According to the analysis, the bright plumes were storm systems triggered in Jupiter's deep water clouds that moved upward in the atmosphere vigorously and injected a fresh mixture of ammonia ice and water about 20 miles (30 kilometers) above the visible clouds. The storms moved in the peak of a jet stream in Jupiter's atmosphere at 375 miles per hour (600 kilometers per hour). Models of the disturbance indicate that the jet stream extends deep in the buried atmosphere of Jupiter, more than 60 miles (approximately100 kilometers) below the cloud tops where most sunlight is absorbed.