Grow Text SizeShrink Text Size
Our Journey Back to Hubble
Since its launch in April 1990, NASA’s Hubble Space Telescope has become a familiar icon to millions of people from Cincinnati to Singapore and continues to excite astronomers around the world with its discoveries. 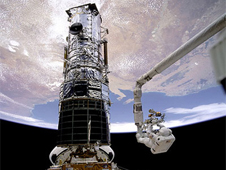 Astronaut F. Story Musgrave, anchored on the Space Shuttle Endeavor’s robotic arm, prepares to be elevated to the top of the Hubble Space Telescope during Hubble’s first servicing mission in 1993. Click image for enlargement. Credit: NASA Just a few of Hubble’s accomplishments include measurement of the current rate of expansion of the universe (the Hubble Constant), the “shocking” discovery that the expansion of the universe is speeding up, and the determination of an accurate age of the cosmos of 13.7 billion years. Hubble showed that titanic gamma-ray bursts first observed by Air Force satellites originate in distant galaxies. Hubble made the first accurate measurement of the mass of a super-massive black hole and performed the first “demographic” survey of super massive black holes that exist at the centers of nearly all galaxies. Hubble made the first observations of the chemical makeup of the atmosphere of a planet orbiting another star and provided the first high-resolution maps of the structures of planet-forming disks of dust and debris around ordinary stars like the sun.

If all goes as planned, the astronauts will also attempt the first ever on-orbit repair of two science instruments – the Space Telescope Imaging Spectrograph, which stopped functioning in August, 2004, and the Advanced Camera for Surveys, which stopped working in January 2007.

The fifth shuttle mission to Hubble is targeted for launch in 2009. Three of the seven astronauts selected for this mission will be making a return visit to Hubble, and all are rigorously training to prepare for what could be their most challenging mission yet.

Please join us for this amazing ride. Check back each month for a ‘behind-the-scenes’ look at just what it takes to successfully test instruments and other hardware. Gain insight into difficult tasks the astronauts must successfully accomplish here on Earth in order to master those seemingly simple spacewalks.