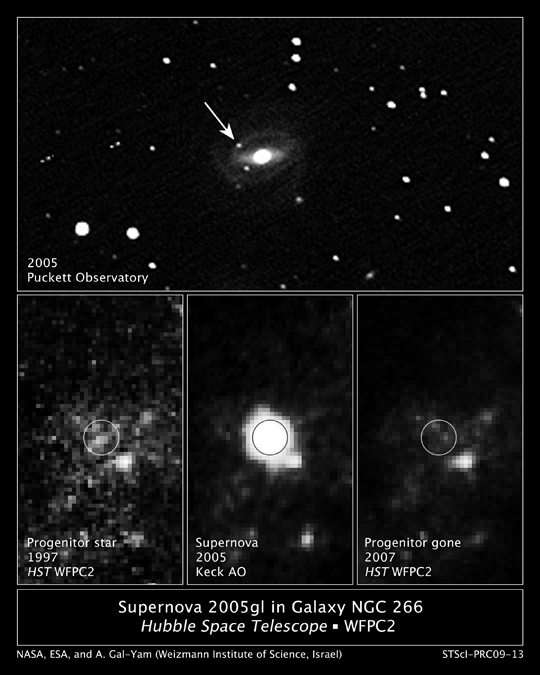 NASA's Hubble Space Telescope has identified a star that was one million times brighter than the sun before it exploded as a supernova in 2005. According to current theories of stellar evolution, the star should not have self-destructed so early in its life. "This might mean that we are fundamentally wrong about the evolution of massive stars, and that theories need revising," says Avishay Gal-Yam of the Weizmann Institute of Science, Rehovot, Israel.

The doomed star, which is estimated to have had about 100 times our sun's mass, was not mature enough, according to theory, to have evolved a massive iron core of nuclear fusion ash. This is the prerequisite for a core implosion that triggers a supernova blast.

The finding appeared yesterday in the online version of Nature Magazine.

The explosion, called supernova SN 2005gl, was seen in the barred-spiral galaxy NGC 266 on October 5, 2005. Pre-explosion pictures from the Hubble archive, taken in 1997, reveal the progenitor as a very luminous point source with an absolute visual magnitude of -10.3.

The progenitor was so bright that it probably belonged to a class of stars called Luminous Blue Variables (LBVs), "because no other type of star is as intrinsically brilliant," says Gal-Yam. As an LBV-class star evolves it sheds much of its mass through a violent stellar wind. Only at that point does it develop a large iron core and ultimately explodes as a core-collapse supernova.

Extremely massive and luminous stars topping 100 solar masses, such as Eta Carinae in our own Milky Way Galaxy, are expected to lose their entire hydrogen envelopes prior to their ultimate explosions as supernovae. "These observations demonstrate that many details in the evolution and fate of LBVs remain a mystery. We should continue to keep an eye on Eta Carinae - it may surprise us yet again," says supernova expert Mario Livio of the Space Telescope Science Institute, Baltimore, Md.

"The progenitor identification shows that, at least in some cases, massive stars explode before losing most of their hydrogen envelope, suggesting that the evolution of the core and the evolution of the envelope are less coupled than previously thought, a finding which may require a revision of stellar evolution theory," says co-author Douglas Leonard from San Diego State University, Calif.

One possibility is that the progenitor to SN 2005gl was really a pair of stars, a binary system that merged. This would have stoked nuclear reactions to brighten the star enormously, making it look more luminous and less evolved than it really is. "This also leaves open the question that there may be other mechanisms for triggering supernova explosions," says Gal-Yam. "We may be missing something very basic in understanding how a superluminous star goes through mass loss."

Gal-Yam reports that the observation revealed that only a small part of the star's mass was flung off in the explosion. Most of the material, says Gal-Yam, was drawn into the collapsing core that has probably become a black hole estimated to be at least 10 to 15 solar masses.

Gal-Yam and Leonard located the progenitor in archival images of NGC 266 taken in 1997. It was easily identifiable only because it is so superluminous. Only Hubble could clearly resolve it at such a great distance.

The team then used the Keck telescope to precisely locate the supernova on the outer arm of the galaxy. A follow-up observation with Hubble in 2007 unequivocally showed that the superluminous star was gone. To make sure the new observation was consistent with the 1997 archival image, the astronomers used the same Hubble camera used in 1997, the Wide Field Planetary Camera 2.

Finding archival images of stars before the stars explode as supernovae isn't an easy task. Several other supernova progenitor candidates have been reported prior to the Hubble observation. The only other absolutely indisputable progenitor, however, was the blue supergiant progenitor to SN 1987A. In the case of SN 1987A, it was thought that the progenitor star was once a red supergiant and at a later stage evolved back to blue supergiant status. This led to a major reworking of supernova theory. The progenitor star observed by Gal-Yam is too massive to have gone through such an oscillation to the red giant stage, so yet another new explanation is required, he says.