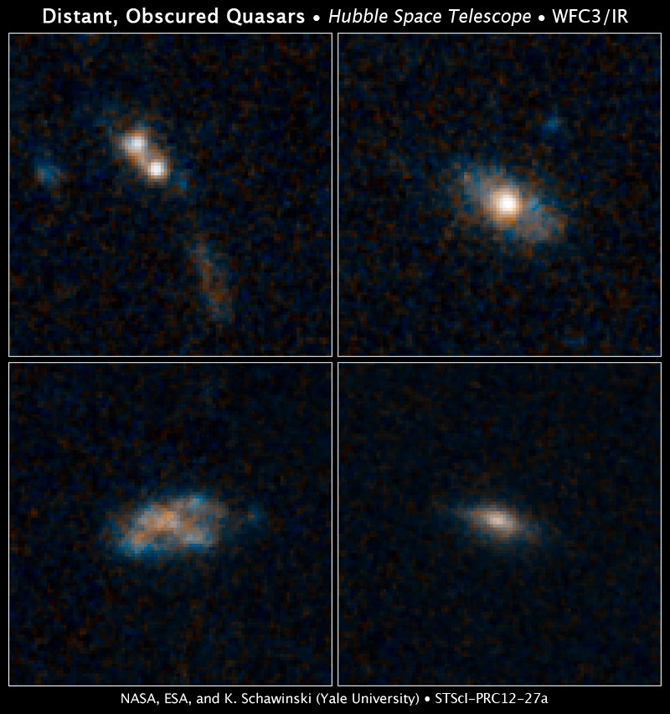 › View larger
The galaxies in these four images have so much dust surrounding them that the brilliant light from their quasars cannot be seen in these Hubble Space Telescope images. Quasars are the brilliant beacons of light that are powered by black holes feasting on captured material, and in the process, heating some of the matter to millions of degrees. The images at top right, bottom left, and bottom right reveal three of the survey's normal-looking galaxies that host quasars. Only one galaxy in the sample, at top left, shows evidence of an interaction with another galaxy. The two white blobs are the cores from both galaxies. A streamer of material, colored brown and blue, also lies below the merging galaxies.The galaxies existed roughly 8 billion to 12 billion years ago, during a peak epoch of black-hole growth. The galaxies' masses are comparable to our Milky Way's. The blue patches are star-forming regions. The brown areas are either dust or old stars. The images were taken by Hubble's Wide Field Camera 3 between 2011 and 2012. Credit: NASA, ESA, and K. Schawinski (Yale University)

Black holes in the early universe needed a few snacks rather than one giant meal to fuel their quasars and help them grow, a new study shows.

Quasars are the brilliant beacons of light that are powered by black holes feasting on captured material, and in the process, heating some of the matter to millions of degrees. The brightest quasars reside in galaxies distorted by collisions with other galaxies. These encounters send lots of gas and dust into the gravitational whirlpool of hungry black holes.

Now, however, astronomers are uncovering an underlying population of fainter quasars that thrive in normal-looking spiral galaxies. They are triggered by black holes snacking on such tasty treats as a batch of gas or the occasional small satellite galaxy.

A census of 30 quasar host galaxies conducted with two of NASA's premier observatories, the Hubble Space Telescope and Spitzer Space Telescope, has found that 26 of the host galaxies bear no tell-tale signs of collisions with neighbors, such as distorted shapes. Only one galaxy in the sample shows evidence of an interaction with another galaxy. The galaxies existed roughly 8 billion to 12 billion years ago, during a peak epoch of black-hole growth.

The study, led by Kevin Schawinski of Yale University, bolsters evidence that most massive black-hole growth in the early universe was fueled by small, long-term events rather than dramatic short-term major mergers.

"Quasars that are products of galaxy collisions are very bright," Schawinski said. "The objects we looked at in this study are the more typical quasars. They're a lot less luminous. The brilliant quasars born of galaxy mergers get all the attention because they are so bright and their host galaxies are so messed up. But the typical bread-and-butter quasars are actually where most of the black-hole growth is happening. They are the norm, and they don't need the drama of a collision to shine."

Schawinski's science paper has been accepted for publication in a letter to the Monthly Notices of the Royal Astronomical Society.

For his analysis, Schawinski analyzed galaxies observed by the Spitzer and Hubble telescopes in the Cosmic Assembly Near-infrared Deep Extragalactic Legacy Survey (CANDELS). He chose 30 dust-shrouded galaxies that appeared extremely bright in infrared images taken by the Spitzer telescope, a sign that their resident black holes are feasting on infalling material. The dust is blocking the quasar's light at visible wavelengths. But infrared light pierces the dust, allowing Schawinski to study the galaxies' detailed structure. The masses of those galaxies are comparable to our Milky Way's.

Schawinski then studied the galaxies in near-infrared images taken by Hubble's Wide Field Camera 3. Hubble’s sharp images allowed careful analysis of galaxy shapes, which would be significantly distorted if major galaxy mergers had taken place and were disrupting the structure. Instead, in all but one instance, the galaxies show no such disruption.

Whatever process is stoking the quasars, it's below the detection capability of even Hubble. "I think it's a combination of processes, such as random stirring of gas, supernovae blasts, swallowing of small bodies, and streams of gas and stars feeding material into the nucleus," Schawinski said.

A black hole doesn't need much gas to satisfy its hunger and turn on a quasar. "There's more than enough gas within a few light-years from the center of our Milky Way to turn it into a quasar," Schawinski explained. "It just doesn't happen. But it could happen if one of those small clouds of gas ran into the black hole. Random motions and stirrings inside the galaxy would channel gas into the black hole. Ten billion years ago, those random motions were more common and there was more gas to go around. Small galaxies also were more abundant and were swallowed up by larger galaxies."

The galaxies in Schawinski's study are prime targets for the James Webb Space Telescope, a large infrared observatory scheduled to launch later this decade. "To get to the heart of what kinds of events are powering the quasars in these galaxies, we need the Webb telescope. Hubble and Spitzer have been the trailblazers for finding them."

For images and more information about this study, visit:
http://hubblesite.org/news/2012/27

For more information about the Hubble Space Telescope, visit:
http://www.nasa.gov/hubble

The Hubble Space Telescope is a project of international cooperation between NASA and the European Space Agency. NASA's Goddard Space Flight Center in Greenbelt, Md., manages the telescope. The Space Telescope Science Institute (STScI) in Baltimore, Md., conducts Hubble science operations. STScI is operated by the Association of Universities for Research in Astronomy, Inc., in Washington, D.C. Cheryl Gundy, STScI
› Back To Top