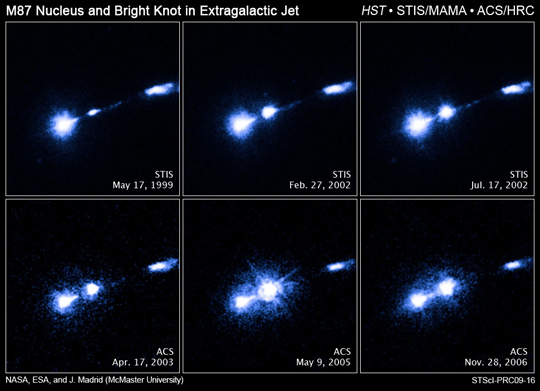 A flare-up in a jet of matter blasting from a monster black hole is giving astronomers an incredible light show.

The outburst is coming from a blob of matter, called HST-1, embedded in the jet, a powerful narrow beam of hot gas produced by a supermassive black hole residing in the core of the giant elliptical galaxy M87. HST-1 is so bright that it is outshining even M87’s brilliant core, whose monster black hole is one of the most massive yet discovered.

The glowing gas clump has taken astronomers on a rollercoaster ride of suspense. Astronomers watched HST-1 brighten steadily for several years, then fade, and then brighten again. They say it’s hard to predict what will happen next.

NASA’s Hubble Space Telescope has been following the surprising activity for seven years, providing the most detailed ultraviolet-light view of the event. Other telescopes have been monitoring HST-1 in other wavelengths, including radio and X-rays. The Chandra X-ray Observatory was the first to report the brightening in 2000. HST-1 was first discovered and named by Hubble astronomers in 1999. The gas knot is 214 light-years from the galaxy’s core.

The flare-up may provide insights into the variability of black hole jets in distant galaxies, which are difficult to study because they are too far away. M87 is located 54 million light-years away in the Virgo Cluster, a region of the nearby universe with the highest density of galaxies.

“I did not expect the jet in M87 or any other jet powered by accretion onto a black hole to increase in brightness in the way that this jet does,” says astronomer Juan Madrid of McMaster University in Hamilton, Ontario, who conducted the Hubble study. “It grew 90 times brighter than normal. But the question is, does this happen to every single jet or active nucleus, or are we seeing some odd behavior from M87?”

Hubble gives astronomers a unique near-ultraviolet view of the flare that cannot be accomplished with ground-based telescopes. “Hubble’s sharp vision allows it to resolve HST-1 and separate it from the black hole,” Madrid explains.

Despite the many observations by Hubble and other telescopes, astronomers are not sure what is causing the brightening. One of the simplest explanations is that the jet is hitting a dust lane or gas cloud and then glows due to the collision. Another possibility is that the jet’s magnetic field lines are squeezed together, unleashing a large amount of energy. This phenomenon is similar to how solar flares develop on the Sun and is even a mechanism for creating Earth’s auroras.

Madrid assembled seven year’s worth of Hubble archival images of the jet to capture changes in the HST-1’s behavior over time. Some of the images came from observing programs that studied the galaxy, but not the jet.

He found data from the Space Telescope Imaging Spectrograph (STIS) that showed a noticeable brightening between 1999 and 2001. In images from 2002 to 2005, HST-1 continued to rise steadily in brightness. In 2003 the jet knot was more brilliant than M87’s luminous core. In May 2005 HST-1 became 90 times brighter than it was in 1999. After May 2005 the flare began to fade, but it intensified again in November 2006. This second outburst was fainter than the first one.

“By watching the outburst over several years, I was able to follow the brightness and see the evolution of the flare over time,” Madrid says. “We are lucky to have telescopes like Hubble and Chandra, because without them we would see the increase in brightness in the core of M87, but we would not know where it was coming from.”

Madrid hopes that future observations of HST-1 will reveal the cause of the mysterious activity. “We hope the observations will yield some theories that will give us some good explanations as to the mechanism that is causing the flaring,” Madrid says. “Astronomers would like to know if this is an intrinsic instability of the jet when it plows its way out of the galaxy, or if it is something else.”

The study’s results are published in the April 2009 issue of the Astronomical Journal.