Grow Text SizeShrink Text Size
NASA Great Observatories Find Candidate for Most Distant Object in the Universe to Date
By combining the power of NASA's Hubble and Spitzer space telescopes and one of nature's own natural "zoom lenses" in space, astronomers have set a new record for finding the most distant galaxy seen in the universe. 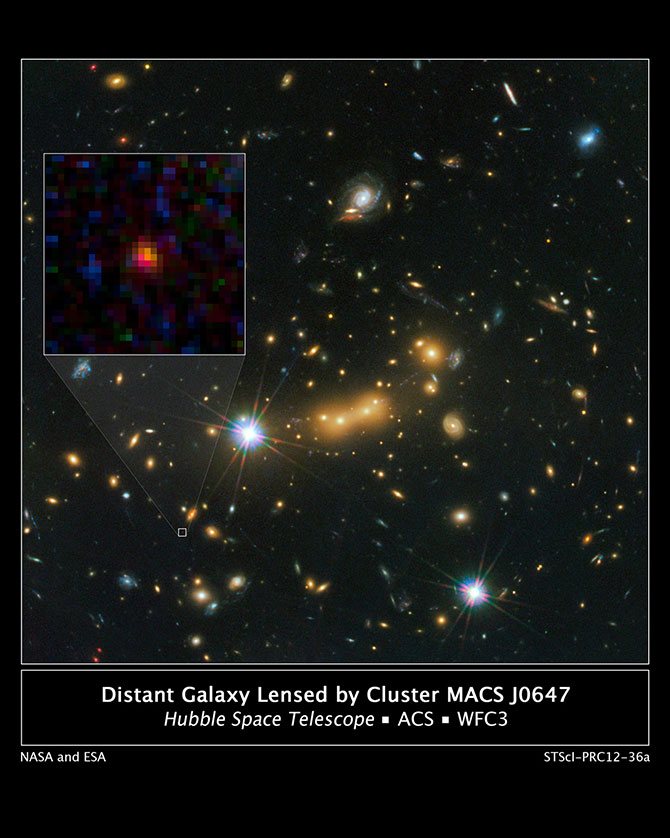 The newly discovered galaxy, named MACS0647-JD, is very young and only a tiny fraction of the size of our Milky Way. The object is observed 420 million years after the big bang. The inset at left shows a close-up of the young dwarf galaxy. This image is a composite taken with Hubble's WFC 3 and ACS on Oct. 5 and Nov. 29, 2011. Credit: NASA, ESA, and M. Postman and D. Coe (STScI) and CLASH Team.
› Larger image


The farthest galaxy appears as a diminutive blob that is only a tiny fraction of the size of our Milky Way galaxy. But it offers a peek back into a time when the universe was 3 percent of its present age of 13.7 billion years.The newly discovered galaxy, named MACS0647-JD, was observed 420 million years after the big bang, the theorized beginning of the universe. Its light has traveled 13.3 billion years to reach Earth.

This find is the latest discovery from a program that uses natural zoom lenses to reveal distant galaxies in the early universe. The Cluster Lensing And Supernova Survey with Hubble (CLASH),an international group led by Marc Postman of the Space Telescope Science Institute in Baltimore, Md., is using massive galaxy clusters as cosmic telescopes to magnify distant galaxies behind them. This effect is called gravitational lensing.

Along the way, 8 billion years into its journey, light from MACS0647-JD took a detour along multiple paths around the massive galaxy cluster MACS J0647+7015. Without the cluster's magnification powers, astronomers would not have seen this remote galaxy.Because of gravitational lensing, the CLASH research team was able to observe three magnified images of MACS0647-JD with the Hubble telescope. The cluster's gravity boosted the light from the faraway galaxy, making the images appear about eight, seven, and two times brighter than they otherwise would that enabled astronomers to detect the galaxy more efficiently and with greater confidence.

"This cluster does what no manmade telescope can do," said Postman. "Without the magnification, it would require a Herculean effort to observe this galaxy."

"This object may be one of many building blocks of a galaxy,"said the study's lead author, Dan Coe of the Space Telescope Science Institute. "Over the next 13 billion years, it may have dozens, hundreds, or even thousands of merging events with other galaxies and galaxy fragments."

The galaxy was observed with 17 filters,spanning near-ultraviolet to near-infrared wavelengths, using Hubble's Wide Field Camera 3 (WFC3) and Advanced Camera for Surveys (ACS). Coe, a CLASH team member, discovered the galaxy in February while poring over a catalogue of thousands of gravitationally lensed objects found in Hubble observations of 17 clusters in the CLASH survey.But the galaxy appeared only in the two reddest filters.

"So either MACS0647-JD is a very red object, only shining at red wavelengths, or it is extremely distant and its light has been 'redshifted' to these wavelengths, or some combination of the two," Coe said. "We considered this full range of possibilities."

The CLASH team identified multiple images of eight galaxies lensed by the galaxy cluster. Their positions allowed the team to produce a map of the cluster's mass, which is primarily composed of dark matter. Dark matter is an invisible form of matter that makes up the bulk of the universe's mass. "It's like a big puzzle," said Coe. "We have to arrange the mass in the cluster so that it deflects the light of each galaxy to the positions observed." The team's analysis revealed that the cluster's mass distribution produced three lensed images of MACS0647-JD at the positions and relative brightness observed in the Hubble image.

Coe and his collaborators spent months systematically ruling out these other alternative explanations for the object's identity, including red stars, brown dwarfs, and red (old or dusty) galaxies at intermediate distances from Earth. They concluded that a very distant galaxy was the correct explanation.

The paper will appear in the Dec. 20 issue of The Astrophysical Journal.

Redshift is a consequence of the expansion of space over cosmic time. Astronomers study the distant universe in near-infrared light because the expansion of space stretches ultraviolet and visible light from galaxies into infrared wavelengths. Coe estimates MACS0647-JD has a redshift of 11, the highest yet observed.

Images of the galaxy at longer wavelengths obtained with the Spitzer Space Telescope played a key role in the analysis. If the object were intrinsically red, it would appear bright in the Spitzer images. Instead, the galaxy barely was detected, if at all, indicating its great distance. The research team plans to use Spitzer to obtain deeper observations of the galaxy, which should yield confident detections as well as estimates of the object's age and dust content.

MACS0647-JD galaxy, however, may be too far away for any current telescope to confirm the distance based on spectroscopy, which spreads out an object's light into thousands of colors. Nevertheless, Coe is confident the fledgling galaxy is the new distance champion based on its unique colors and the research team's extensive analysis. "All three of the lensed galaxy images match fairly well and are in positions you would expect for a galaxy at that remote distance when you look at the predictions from our best lens models for this cluster," Coe said.

The new distance champion is the second remote galaxy uncovered in the CLASH survey, a multi-wavelength census of 25 hefty galaxy clusters with Hubble's ACS and WFC3. Earlier this year, the CLASH team announced the discovery of a galaxy that existed when the universe was 490 million years old, 70 million years later than the new record-breaking galaxy. So far, the survey has completed observations for 20 of the 25 clusters.

The team hopes to use Hubble to search for more dwarf galaxies at these early epochs. If these infant galaxies are numerous, then they could have provided the energy to burn off the fog of hydrogen that blanketed the universe, a process called re-ionization. Re-ionization ultimately made the universe transparent to light.