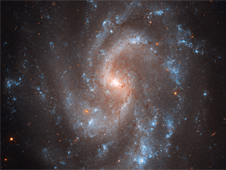 The universe appears to be expanding at an increasing rate. Some believe that is because the universe is filled with a dark energy that works in the opposite way of gravity. One alternative to that hypothesis is that an enormous bubble of relatively empty space eight billion light-years across surrounds our galactic neighborhood. If we lived near the center of this void, observations of galaxies being pushed away from each other at accelerating speeds would be an illusion.

This hypothesis has been invalidated because astronomers have refined their understanding of the universe's present expansion rate. Adam Riess of the Space Telescope Science Institute (STScI) and Johns Hopkins University in Baltimore, Md., led the research. The Hubble observations were conducted by the SHOES (Supernova Ho for the Equation of State) team that works to refine the accuracy of the Hubble constant to a precision that allows for a better characterization of dark energy's behavior. The observations helped determine a figure for the universe's current expansion rate to an uncertainty of just 3.3 percent. The new measurement reduces the error margin by 30 percent over Hubble's previous best measurement of 2009. Riess' results appear in the April 1 issue of The Astrophysical Journal.

Every decrease in uncertainty of the universe’s expansion rate helps solidify our understanding of its cosmic ingredients. Knowing the precise value of the universe's expansion rate further restricts the range of dark energy's strength and helps astronomers tighten up their estimates of other cosmic properties, including the universe's shape and its roster of neutrinos, or ghostly particles, that filled the early universe.

"We are using the new camera on Hubble like a policeman’s radar gun to catch the universe speeding," Riess said. "It looks more like it's dark energy that’s pressing on the gas pedal."

Dark energy is one of the greatest cosmological mysteries in modern physics. Even Albert Einstein conceived of a repulsive force, called the cosmological constant, which would counter gravity and keep the universe stable. He abandoned the idea when astronomer Edwin Hubble discovered in 1929 that the universe is expanding. Observational evidence for dark energy didn’t come along until 1998, when two teams of researchers (one led by Riess) discovered it.

The idea of dark energy was so far-fetched, many scientists began contemplating other strange interpretations, including the cosmic bubble theory. In this theory, the lower-density bubble would expand faster than the more massive universe around it. To an observer inside the bubble, it would appear that a dark-energy-like force was pushing the entire universe apart. The bubble hypothesis requires that the universe’s expansion rate be much slower than astronomers have calculated, about 60 to 65 kilometers per second per megaparsec. By reducing the uncertainty of the Hubble constant’s value to 3.3 percent, Riess reports that his team has eliminated beyond all reasonable doubt the possibility of that lower number.

“The hardest part of the bubble theory to accept was that it required us to live very near the center of such an empty region of space,” explained Lucas Macri, of Texas A&M University in College Station, a key collaborator of Riess. “This has about a one in a million chance of occurring. But since we know that something weird is making the universe accelerate, it’s better to let the data be our guide.”

Using stars as “cosmic yardsticks” measuring the universe’s expansion rate is a tricky business. Riess’ team first had to determine accurate distances to galaxies near and far from Earth. The team compared those distances with the speed at which the galaxies are apparently receding because of the expansion of space. They used those two values to calculate the Hubble constant, the number that relates the speed at which a galaxy appears to recede to its distance from the Milky Way. Because astronomers cannot physically measure the distances to galaxies, researchers had to find stars or other objects that serve as reliable cosmic yardsticks. These are objects with an intrinsic brightness, brightness that hasn't been dimmed by distance, an atmosphere, or stellar dust, that is known. Their distances, therefore, can be inferred by comparing their true brightness with their apparent brightness as seen from Earth.

Among the most reliable of these cosmic yardsticks for relatively shorter distances are Cepheid variables, pulsating stars that dim and fade at rates that correspond to their intrinsic luminosity. But Cepheids are too dim to be found in very distant galaxies. To calculate longer distances, Riess’ team chose a special class of exploding stars called Type Ia supernovae. These stellar explosions all flare with similar luminosity and are brilliant enough to be seen far across the universe. By comparing the apparent brightness of Type la supernovae and pulsating Cepheid stars, the astronomers could measure accurately their intrinsic brightness and therefore calculate distances to Type Ia supernovae in far-flung galaxies.

"WFC3 is the best camera ever flown on Hubble for making these measurements, improving the precision of prior measurements in a small fraction of the time it previously took," said Macri.

Using one instrument to measure the Hubble constant is like measuring a hallway with a tape measure instead of by laying a ruler from end to end. By avoiding the need to pick up the ruler and lay it back down, you can prevent mistakes. “The camera on Hubble, WFC3, is the best ever flown on Hubble for making these measurements, improving the precision of prior measurements in a small fraction of the time it previously took,” Riess said.

The astronomer hopes that Hubble will continue to be used in this way to reduce the uncertainty in the Hubble constant even more, and thus refine the measured properties of dark energy. He suggests the present uncertainty could be cut in two before Hubble gives way to improvements out of Hubble’s reach but within the scope of the James Webb Space Telescope, an infrared observatory scheduled to launch later this decade.

Chasing a runaway universe, Riess has been pursing dark energy for 13 years. He co-discovered the existence of dark energy by finding that distant Type Ia supernovae were dimmer than expected, which meant they were farther away than anticipated. The only way for that to happen, Riess realized, was if the expansion of the universe had sped up some time in the past.

Until that discovery, astronomers had generally believed that the cosmic expansion was gradually slowing down, due to the gravitational tugs that individual galaxies exert on one another. But the results implied that some mysterious force was acting against the pull of gravity, shoving galaxies away from each other at ever-increasing speeds.

Riess decided that one of the best ways to tighten the constraints on dark energy is to determine an accurate value for the Hubble constant, which he has been doing with the Hubble Space Telescope. That measurement, combined with others from NASA’s Wilkinson Microwave Anisotropy Probe (WMAP), traces the universe’s behavior from nearly the dawn of time to the present age. (WMAP showed the universe as it appeared shortly after the Big Bang, before stars and galaxies formed.)

For images and more information about this study, visit: