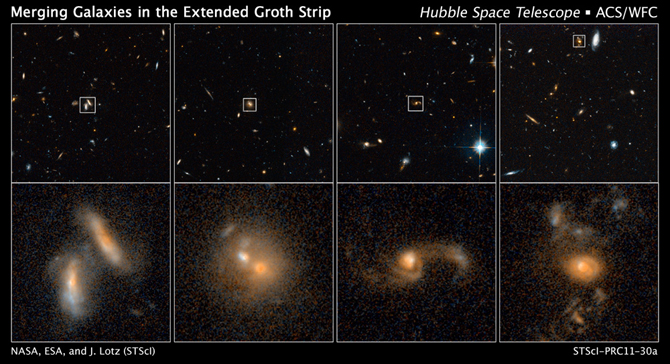 Galactic Wrecks Far from Earth: These images from NASA's Hubble Space Telescope's ACS in 2004 and 2005 show four examples of interacting galaxies far away from Earth. The galaxies, beginning at far left, are shown at various stages of the merger process. The top row displays merging galaxies found in different regions of a large survey known as the AEGIS. More detailed views are in the bottom row of images. (Credit: NASA; ESA; J. Lotz, STScI; M. Davis, University of California, Berkeley; and A. Koekemoer, STScI)
› Larger image

A new analysis of Hubble surveys, combined with simulations of galaxy interactions, reveals that the merger rate of galaxies over the last 8 billion to 9 billion years falls between the previous estimates.

The galaxy merger rate is one of the fundamental measures of galaxy evolution, yielding clues to how galaxies bulked up over time through encounters with other galaxies. And yet, a huge discrepancy exists over how often galaxies coalesced in the past. Measurements of galaxies in deep-field surveys made by NASA’s Hubble Space Telescope generated a broad range of results: anywhere from 5 percent to 25 percent of the galaxies were merging.

The study, led by Jennifer Lotz of the Space Telescope Science Institute in Baltimore, Md., analyzed galaxy interactions at different distances, allowing the astronomers to compare mergers over time. Lotz’s team found that galaxies gained quite a bit of mass through collisions with other galaxies. Large galaxies merged with each other on average once over the past 9 billion years. Small galaxies were coalescing with large galaxies more frequently. In one of the first measurements of smashups between dwarf and massive galaxies in the distant universe, Lotz’s team found these mergers happened three times more often than encounters between two hefty galaxies.

“Having an accurate value for the merger rate is critical because galactic collisions may be a key process that drives galaxy assembly, rapid star formation at early times, and the accretion of gas onto central supermassive black holes at the centers of galaxies,” Lotz explains.

The team’s results are accepted for publication appeared in The Astrophysical Journal.

The problem with previous Hubble estimates is that astronomers used different methods to count the mergers.

“These different techniques probe mergers at different ‘snapshots’ in time along the merger process,” Lotz says. “It is a little bit like trying to count car crashes by taking snapshots. If you look for cars on a collision course, you will only see a few of them. If you count up the number of wrecked cars you see afterwards, you will see many more. Studies that looked for close pairs of galaxies that appeared ready to collide gave much lower numbers of mergers than those that searched for galaxies with disturbed shapes, evidence that they’re in smashups.”

To figure out how many encounters happen over time, Lotz needed to understand how long merging galaxies would look like “wrecks” before they settle down and begin to look like normal galaxies again.

That’s why Lotz and her team turned to highly detailed computer simulations to help make sense of the Hubble photographs. The team made simulations of the many possible galaxy collision scenarios and then mapped them to Hubble images of galaxy interactions.

Creating the computer models was a time-consuming process. Lotz’s team tried to account for a broad range of merger possibilities, from a pair of galaxies with equal masses joining together to an interaction between a giant galaxy and a puny one. The team also analyzed different orbits for the galaxies, possible collision impacts, and how galaxies were oriented to each other. In all, the group came up with 57 different merger scenarios and studied the mergers from 10 different viewing angles. “Viewing the simulations was akin to watching a slow-motion car crash,” Lotz says.

The simulations followed the galaxies for 2 billion to 3 billion years, beginning at the first encounter and continuing until the union was completed, about a billion years later.

“Our simulations offer a realistic picture of mergers between galaxies,” Lotz says.

In addition to studying the smashups between giant galaxies, the team also analyzed encounters among puny galaxies. Spotting collisions with small galaxies are difficult because the objects are so dim relative to their larger companions.

“Dwarf galaxies are the most common galaxy in the universe,” Lotz says. “They may have contributed to the buildup of large galaxies. In fact, our own Milky Way galaxy had several such mergers with small galaxies in its recent past, which helped to build up the outer regions of its halo. This study provides the first quantitative understanding of how the number of galaxies disturbed by these minor mergers changed with time.”

Lotz compared her simulation images with pictures of thousands of galaxies taken from some of Hubble’s largest surveys, including the All-Wavelength Extended Groth Strip International Survey (AEGIS), the Cosmological Evolution Survey (COSMOS), and the Great Observatories Origins Deep Survey (GOODS), as well as mergers identified by the DEEP2 survey with the W.M. Keck Observatory in Hawaii. She and other groups had identified about a thousand merger candidates from these surveys but initially found very different merger rates.

“When we applied what we learned from the simulations to the Hubble surveys in our study, we derived much more consistent results,” Lotz says.

Her next goal is to analyze galaxies that were interacting around 11 billion years ago, when star formation across the universe peaked, to see if the merger rate rises along with the star formation rate. A link between the two would mean galaxy encounters incite rapid star birth.

In addition to Lotz, the coauthors of the paper include Patrik Jonsson of Harvard-Smithsonian Center for Astrophysics in Cambridge, Mass; T. J. Cox of Carnegie Observatories in Pasadena, Calif.; Darren Croton of the Centre for Astrophysics and Supercomputing at Swinburne University of Technology in Hawthorn, Australia; Joel R. Primack of the University of California, Santa Cruz; Rachel S. Somerville of the Space Telescope Science Institute and The Johns Hopkins University in Baltimore, Md.; and Kyle Stewart of NASA’s Jet Propulsion Laboratory in Pasadena, Calif.