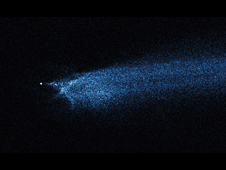 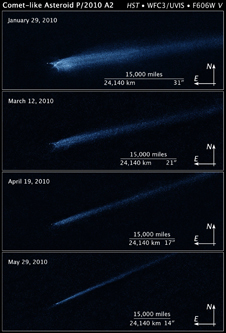 › View larger
These four Hubble Space Telescope images, taken over a five-month period, from January to May 2010 with Wide Field Camera 3, show the odd-shaped debris that likely came from a collision between two asteroids. Illustration Credit: NASA, ESA, and Z. Levay (STScI) Science Credit: NASA, ESA, and D. Jewitt (UCLA) WASHINGTON -- NASA's Hubble Space Telescope has captured the first snapshots of a suspected asteroid collision. The images show a bizarre X-shaped object at the head of a comet-like trail of material.

In January, astronomers began using Hubble to track the object for five months. They thought they had witnessed a fresh asteroid collision, but were surprised to learn the collision occurred in early 2009.

"We expected the debris field to expand dramatically, like shrapnel flying from a hand grenade," said astronomer David Jewitt of the University of California in Los Angeles, who is a leader of the Hubble observations. "But what happened was quite the opposite. We found that the object is expanding very, very slowly."

The peculiar object, dubbed P/2010 A2, was found cruising around the asteroid belt, a reservoir of millions of rocky bodies between the orbits of Mars and Jupiter. It is estimated modest-sized asteroids smash into each other about once a year. When the objects collide, they inject dust into interplanetary space. But until now, astronomers have relied on models to make predictions about the frequency of these collisions and the amount of dust produced.

Catching colliding asteroids is difficult because large impacts are rare while small ones, such as the one that produced P/2010 A2, are exceedingly faint. The two asteroids that make up P/2010 A2 were unknown before the collision because they were too faint to be noticed. The collision itself was unobservable because of the asteroids' position in relation to the sun. About 10 or 11 months later, in January 2010, the Lincoln Near-Earth Research (LINEAR) Program Sky Survey spotted the comet-like tail produced by the collision. But only Hubble discerned the X pattern, offering unequivocal evidence that something stranger than a comet outgassing had occurred.

Although the Hubble images give compelling evidence for an asteroid collision, Jewitt says he still does not have enough information to rule out other explanations for the peculiar object. In one such scenario, a small asteroid's rotation increases from solar radiation and loses mass, forming the comet-like tail.

"These observations are important because we need to know where the dust in the solar system comes from, and how much of it comes from colliding asteroids as opposed to 'outgassing' comets," Jewitt said. "We also can apply this knowledge to the dusty debris disks around other stars, because these are thought to be produced by collisions between unseen bodies in the disks. Knowing how the dust was produced will yield clues about those invisible bodies."

The Hubble images, taken from January to May 2010 with the telescope's Wide Field Camera 3, reveal a point-like object about 400 feet wide, with a long, flowing dust tail behind a never-before-seen X pattern. Particle sizes in the tail are estimated to vary from about 1/25th of an inch to an inch in diameter.

The 400-foot-wide object in the Hubble image is the remnant of a slightly larger precursor body. Astronomers think a smaller rock, perhaps 10 to 15 feet wide, slammed into the larger one. The pair probably collided at high speed, about 11,000 mph, which smashed and vaporized the small asteroid and stripped material from the larger one. Jewitt estimates that the violent encounter happened in February or March 2009 and was as powerful as the detonation of a small atomic bomb.

Sunlight radiation then swept the debris behind the remnant asteroid, forming a comet-like tail. The tail contains enough dust to make a ball 65 feet wide, most of it blown out of the bigger body by the impact-caused explosion. The science journal Nature will publish the findings in the Oct. 14 issue.

"Once again, Hubble has revealed unexpected phenomena occurring in our celestial 'back yard," said Eric Smith, Hubble Program scientist at NASA Headquarters in Washington. "Though it's often Hubble's deep observations of the universe or beautiful images of glowing nebulae in our galaxy that make headlines, observations like this of objects in our own solar system remind us how much exploration we still have to do locally."

Astronomers do not have a good explanation for the X shape. The crisscrossed filaments at the head of the tail suggest that the colliding asteroids were not perfectly symmetrical. Material ejected from the impact, therefore, did not make a symmetrical pattern, a bit like the ragged splash made by throwing a rock into a lake. Larger particles in the X disperse very slowly and give this structure its longevity.

Astronomers plan to use Hubble again next year to view the object. Jewitt and his colleagues hope to see how far the dust has been swept back by the sun's radiation and how the mysterious X-shaped structure has evolved.

For images, movies, and more information about asteroid encounter P/2010 A2, visit: