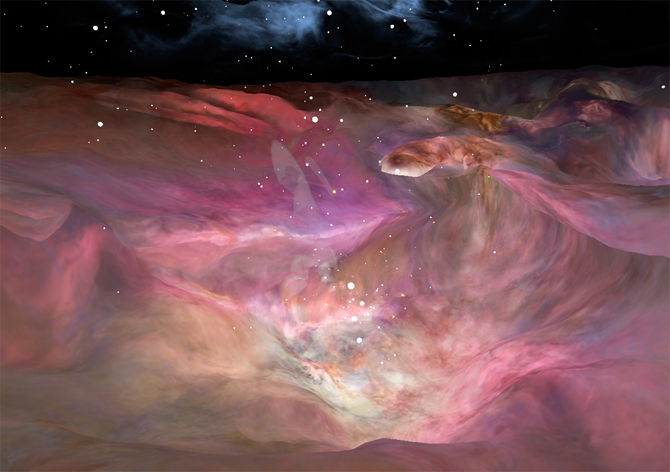 This image depicts a vast canyon of dust and gas in the Orion Nebula from a 3-D computer model based on observations by NASA's Hubble Space Telescope and created by science visualization specialists at the Space Telescope Science Institute (STScI) in Baltimore, Md. A 3-D visualization of this model takes viewers on an amazing four-minute voyage through the 15-light-year-wide canyon. Credit: NASA, G. Bacon, L. Frattare, Z. Levay, and F. Summers (STScI/AURA)
› Larger image

Take an exhilarating ride through the Orion Nebula, a vast star-making factory 1,500 light-years away. Swoop through Orion's giant canyon of gas and dust. Fly past behemoth stars whose brilliant light illuminates and energizes the entire cloudy region. Zoom by dusty tadpole-shaped objects that are fledgling solar systems.

The 43-minute movie chronicles the 20-year life of Hubble and includes highlights from the May 2009 servicing mission to the Earth-orbiting observatory, with footage taken by the astronauts.

The giant-screen film showcases some of Hubble's breathtaking iconic pictures, such as the Eagle Nebula's "Pillars of Creation," as well as stunning views taken by the newly installed Wide Field Camera 3.

While Hubble pictures of celestial objects are awe-inspiring, they are flat 2-D photographs. For this film, those 2-D images have been converted into 3-D environments, giving the audience the impression they are space travelers taking a tour of Hubble's most popular targets.

"A large-format movie is a truly immersive experience," says Frank Summers, an STScI astronomer and science visualization specialist who led the team that developed the movie visualizations. The team labored for nine months, working on four visualization sequences that comprise about 12 minutes of the movie.

"Seeing these Hubble images in 3-D, you feel like you are flying through space and not just looking at picture postcards," Summers continued. "The spacescapes are all based on Hubble images and data, though some artistic license is necessary to produce the full depth of field needed for 3-D."

The most ambitious sequence is a four-minute voyage through the Orion Nebula's gas-and-dust canyon, about 15 light-years across. During the ride, viewers will see bright and dark, gaseous clouds; thousands of stars, including a grouping of bright, hefty stars called the Trapezium; and embryonic planetary systems. The tour ends with a detailed look at a young circumstellar disk, which is much like the structure from which our solar system formed 4.5 billion years ago.

Based on a Hubble image of Orion released in 2006, the visualization was a collaborative effort between science visualization specialists at STScI, including Greg Bacon, who sculpted the Orion Nebula digital model, with input from STScI astronomer Massimo Roberto; the National Center for Supercomputing Applications at the University of Illinois at Urbana-Champaign; and the Spitzer Science Center at the California Institute of Technology in Pasadena.

For some of the sequences, STScI imaging specialists developed new techniques for transforming the 2-D Hubble images into 3-D. STScI image processing specialists Lisa Frattare and Zolt Levay, for example, created methods of splitting a giant gaseous pillar in the Carina Nebula into multiple layers to produce a 3-D effect, giving the structure depth. The Carina Nebula is a nursery for baby stars.

Frattare painstakingly removed the thousands of stars in the image so that Levay could separate the gaseous layers on the isolated Carina pillar. Frattare then replaced the stars into both foreground and background layers to complete the 3-D model. For added effect, the same separation was done for both visible and infrared Hubble images, allowing the film to cross-fade between wavelength views in 3-D.

In another sequence viewers fly into a field of 170,000 stars in the giant star cluster Omega Centauri. STScI astronomer Jay Anderson used his stellar database to create a synthetic star field in 3-D that matches recent razor-sharp Hubble photos.

The film's final four-minute sequence takes viewers on a voyage from our Milky Way Galaxy past many of Hubble's best galaxy shots and deep into space. Some 15,000 galaxies from Hubble's deepest surveys stretch billions of light-years across the universe in a 3-D sequence created by STScI astronomers and visualizers. The view dissolves into a cobweb that traces the universe's large-scale structure, the backbone from which galaxies were born.

In addition to creating visualizations, STScI's education group also provided guidance on the "Hubble 3D" Educator Guide, which includes standards-based lesson plans and activities about Hubble and its mission. Students will use the guide before or after seeing the movie.

"The guide will enhance the movie experience for students and extend the movie into classrooms," says Bonnie Eisenhamer, STScI's Hubble Formal Education manager.

The Hubble Space Telescope is a project of international cooperation between NASA and the European Space Agency (ESA) and is managed by NASA’s Goddard Space Flight Center (GSFC) in Greenbelt, Md. The Space Telescope Science Institute (STScI) conducts Hubble science operations. The institute is operated for NASA by the Association of Universities for Research in Astronomy, Inc., Washington, D.C.
› Back To Top