NASA's Space Eyes Focus on Deep Impact Target
On July 4, NASA's Deep Impact spacecraft will attempt an extraordinarily daring encounter with the far-flung comet Tempel 1, which is hurtling through space at tens of thousands of miles per hour. As if that is not challenging enough, the comet's size, shape and other characteristics are not entirely known. 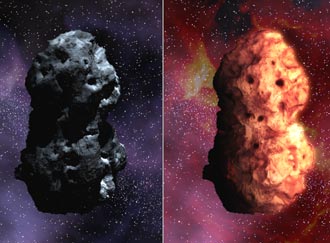 Two of NASA's eyes in the sky, the Spitzer and Hubble Space Telescopes, helped scientists prepare for the comet encounter. From their orbits high above Earth, the telescopes watched Tempel 1 in early 2004. Together they came up with the best estimates of the comet's size, shape, reflectivity and rotation rate. The data may help Deep Impact snap pictures of the dramatic rendezvous and increase the probability of making contact with the comet.

Previous observations of Tempel 1 taken with ground-based telescopes indicated the comet is dark and oblong, with a width of a few miles, or kilometers. Spitzer and Hubble refined these measurements, revealing a matte black comet approximately 14 by 4 kilometers (8.7 by 2.5 miles), or roughly one-half the size of Manhattan.

"Spitzer was crucial in pinning down the comet's size," said Dr. Michael A'Hearn of the University of Maryland, College Park. He is principal investigator for Deep Impact and the Hubble observations. "We'll know exactly what it looks like when we get there."

The Deep Impact spacecraft was launched on Jan. 12, 2005. Its mission is to study the primordial soup of our solar system, which is sealed away inside comets.

On July 3, as it approaches Tempel 1, the spacecraft will separate into two parts. The impactor will attempt the tricky task of placing itself in the path of the speeding snowball, while the second part, the flyby spacecraft, swings around for a ringside view.

After the impactor is released, its specialized software will steer it toward the sunlit portion of Tempel 1's nucleus. To program the software, mission planners at NASA's Jet Propulsion Laboratory, Pasadena, Calif., needed to know the size and reflectivity of Tempel 1's surface. Since its surface can't be observed directly from Earth, scientists turned to Spitzer's infrared eyes to measure its size.

When viewing a comet in visible light from very far away, only reflected sunlight can be seen, so a big, dark comet can look the same as a highly reflective, small comet. In infrared light, a comet's radiated heat is measured, providing a direct look at its size.

Once the size of Tempel 1 was known, scientists could calculate surface reflectivity using a combination of Spitzer and Hubble data. They found Tempel 1 reflects only four percent of the sunlight that falls on it.

"Knowing the reflectivity also tells us how to set up our cameras," Lisse said. "Like photographers, it's important for us to know our subject before the shoot."

Tempel 1's shape and two-dayrotation rate were derived from long-term observations made by various telescopes, including Hubble, Spitzer and the University of Hawaii's 2.2-meter telescope at Mauna Kea.

In addition to the flyby spacecraft, at least 30 telescopes around the world, including Spitzer, Hubble and the Chandra X-ray Observatory, will be watching the dramatic impact. By analyzing the material blown out of the interior of the comet, this global network of telescopes will assemble a list of the raw ingredients that went into making the planets in our solar system.