NASA Finds Vast Regions of West Antarctica Melted in Recent Past
A team of NASA and university scientists has found clear evidence that extensive areas of snow melted in west Antarctica in January 2005 in response to warm temperatures. This was the first widespread Antarctic melting ever detected with NASA's QuikScat satellite and the most significant melt observed using satellites during the past three decades. Combined, the affected regions encompassed an area as big as California.

Son Nghiem of NASA's Jet Propulsion Laboratory, Pasadena, Calif., and Konrad Steffen, director of the Cooperative Institute for Research in Environmental Sciences at the University of Colorado, Boulder, led the team. Using data from QuikScat, they measured snowfall accumulation and melt in Antarctica and Greenland from July 1999 through July 2005. 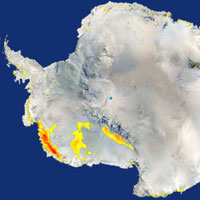 The observed melting occurred in multiple distinct regions, including far inland, at high latitudes and at high elevations, where melt had been considered unlikely. Evidence of melting was found up to 900 kilometers (560 miles) inland from the open ocean, farther than 85 degrees south (about 500 kilometers, or 310 miles, from the South Pole) and higher than 2,000 meters (6,600 feet) above sea level. Maximum air temperatures at the time of the melting were unusually high, reaching more than five degrees Celsius (41 degrees Fahrenheit) in one of the affected areas. They remained above melting for approximately a week.

"Antarctica has shown little to no warming in the recent past with the exception of the Antarctic Peninsula, but now large regions are showing the first signs of the impacts of warming as interpreted by this satellite analysis," said Steffen. "Increases in snowmelt, such as this in 2005, definitely could have an impact on larger-scale melting of Antarctica's ice sheets if they were severe or sustained over time."

The satellite's scatterometer instrument sends radar pulses to the ice sheet surface, measuring the echoed pulses that bounce back. When snow melts and then refreezes, it changes to ice, just as ice cream crystallizes when it is left out too long and is then refrozen. QuikScat can differentiate this icy fingerprint in the snow cover and can map on a continental scale the extent of strong snowmelt and the subsequently formed ice layer. Available ground station measurements validate the satellite results.

The 2005 melt was intense enough to create an extensive ice layer when water refroze after the melt. However, the melt was not prolonged enough for the melt water to flow into the sea.

"Water from melted snow can penetrate into ice sheets through cracks and narrow, tubular glacial shafts called moulins," Steffen said. "If sufficient melt water is available, it may reach the bottom of the ice sheet. This water can lubricate the underside of the ice sheet at the bedrock, causing the ice mass to move toward the ocean faster, increasing sea level."

Nghiem said while no further melting had been detected through March 2007, more monitoring is needed. "Satellite scatterometry is like an X-ray that sees through snow and finds ice layers beneath as early as possible," he said. "It is vital we continue monitoring this region to determine if a long-term trend may be developing."

QuikScat data are helping scientists better understand how Antarctica's and Greenland's ice sheets gain or lose mass. "We need to know what's coming in and going out of the ice sheets," Nghiem said. "QuikScat data, combined with data from NASA's IceSat and Gravity Recovery and Climate Experiment satellites, along with aircraft and ground measurements, all contribute to more accurate estimates of how the polar ice sheets are changing."

The study, "Snow Accumulation and Snowmelt Monitoring in Greenland and Antarctica," appears in the recently published book "Dynamic Planet."