Large Asteroid Zooms Safely Past Earth
A mountain-sized asteroid made its closest approach to Earth at 9:35 a.m. Eastern Time on Wednesday, Sept. 29. 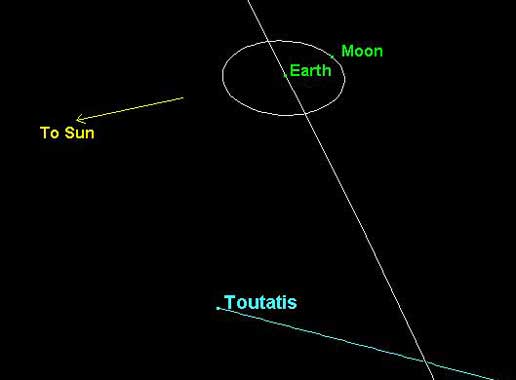 Image above: This graphic illustrates the path of Toutatis with respect to Earth. Image courtesy: NASA/JPL.
Click for videos:
+ Toutatis overview
+ Animation of Toutatis' orbit
+ Computer model of Toutatis: .avi or .mov

Although asteroid 4179 Toutatis came no closer than four times the distance between Earth and the Moon (approximately 1.5 million kilometers or 961,000 miles), this is the closest approach of any known asteroid of comparable size this century.

"This is the closest Toutatis will come for another 500 years, and its orbit is very well known," said Dr. Don Yeomans of NASA's Jet Propulsion Laboratory, Pasadena, Calif., manager of NASA's Near Earth Objects Program Office. "What this fly-by provides is an opportunity to study one of our closest solar system neighbors."

"While we have done radar observations on this particular asteroid before, this is the closest it has come since at least the twelfth century," said Dr. Steve Ostro, a scientist at JPL. "We will use the huge dish in Arecibo, Puerto Rico, to refine our knowledge of its physical characteristics and its trajectory." 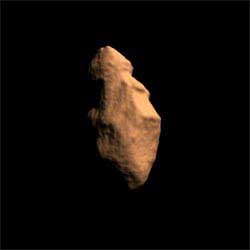 Image above: An artist's concept of Toutatis. Image courtesy: NASA/JPL.


Named after an obscure Celtic and Gallic god, Toutatis is a yam-shaped space rock that measures 1.92 kilometers (1.2 miles) by 2.29 kilometers (1.4 miles) by 4.6 kilometers (2.9 miles). Toutatis has one of the strangest rotation states observed in the solar system. Instead of spinning around a single axis, as do the planets and the vast majority of asteroids, it "tumbles" somewhat like a football after a botched pass. Its rotation is the result of two different types of motion with periods of 5.4 and 7.3 Earth days, which combine in such a way that Toutatis's orientation, with respect to the solar system, never repeats.

When the asteroid flew past Earth, it was traveling at approximately 39,600 kilometers per hour (24,550 miles per hour). Toutatis will not be this close again until 2562. It was discovered in 1989.

For more information about near Earth objects on the Internet, visit http://neo.jpl.nasa.gov/ .