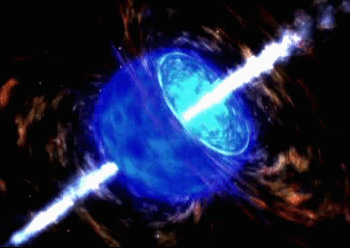 BLACK HOLES - A "COLLAPSAR" ANIMATION - Click on the image to view the animation (5.4 MB)

Image/animation above: The collapse of the core of a massive star to form a black hole is one of the possible causes of a GRB. Hundreds of thousands to a million years prior to the explosion, this very massive star started running out of fuel and let loose much of its outer envelope, or lost the envelope to a companion star. The star then rapidly depleted its remaining central fuel causing the core to lose radiation pressure and collapse.  Surrounded by a disk of accreting matter, a black hole formed inside.  Within a few seconds, streaming particle jets were launched along the rotation axis. The jets, combined with vigorous winds of newly formed radioactive metals blowing off the disk inside, shattered the star. The jet passed through the outer shells of the star and combined with the vigorous winds of newly forged radioactive metals blowing off the disk inside, gave rise to the supernova event. Collisions among the pieces of the jet moving at different velocities, far from the explosion and moving close to light speed, created the GRB, which can only be seen if the jet was pointed at us. What is amazing is that the engine that made the jets that created the gamma ray burst, was no larger than the Washington D.C. area. 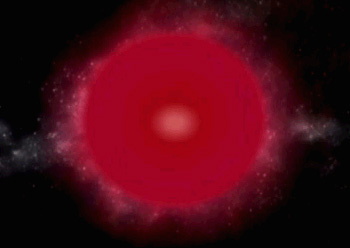 SUPERNOVA "CLASSIC" ANIMATION - Click on the image to view the animation (6.3 MB)

Image/animation above:A common supernova explosion occurs when there is no longer enough fuel to maintain the fusion process in the core of a massive star. As it begins to burn faster, it quickly depletes its hydrogen and swells into a red super-giant. The core, however, continues shrinking and, when it contains just iron, the fusion ceases to give any more energy. In less than a second, the core implodes, crushing iron atoms together while the temperature rises to over 100 billion degrees. The internal pressure, plus neutrines emitted during the formation of the neutron star, overcomes the force of gravity causing gas to shoot out from the heart of the star in an explosive shock wave. When the shock encounters the material in the star's outer layers, they are heated and propelled into space producing the brilliant display of light called a supernova." 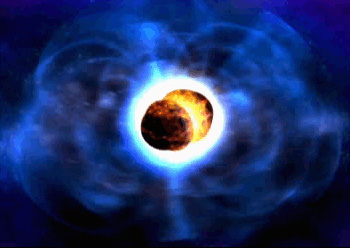 DEVOUR THY NEIGHBOR ANIMATION - Click on the image to view the animation (2.7 MB)

Image/animation above:Another idea for the origin of a GRB is called the Binary Merger Theory. It begins with two neutron stars, or a neutron star and a black hole orbiting each other. The gravitational wave energy emitted by these two gigantic stellar objects causes them to swirl around each other faster and faster, like two boxers in a ring preparing for the first punch. They begin to look misshaped, becoming more oblong the closer they get to one another. The final merger occurs quickly. A black hole is formed and gamma rays shoot out as a GRB.

THE RAPID RESPONSE NETWORK ANIMATION - Click on the image to view the animation (1.1 MB)

Image/animation above:Gamma-ray burst hunters are greatly aided by three new developments: fast detection from orbiting detectors; fast relays to observers worldwide via the Gamma-Ray Burst Coordinates Network (GCN); and also directly contacts robotic telescopes on the ground and in space which react immediately. The GCN is also a repository of current burst information. Relying on this GCN information, observatories such as the Keck Observatory in Hawaii, the Hubble Space Telescope, and the Spitzer Space Telescope will often turn their instruments to study the regions surrounding GBS in the hours and days after an event. The GCN is also available to schools, science museums, and anyone with an internet connection. GCN instrument sites are located around the world.


This 58 minute media-only tape (Library No: G04-A046--Catching Gamma Ray Bursts on the Fly") can be ordered from:

Back to the Swift Mission site