New NASA Satellite to Study Black Hole Birth and Gamma Ray Bursts
By the end of this day, somewhere in the visible universe a new black hole will have formed. Gamma-ray bursts (GRBs), the most distant and powerful explosions known, are likely the birth cries of these new black holes.

NASA's Swift mission is dedicated to studying the gamma-ray burst/black hole connection. The Swift spacecraft, an international collaboration, is scheduled to lift off in November aboard a Delta II rocket from Cape Canaveral Air Force Station, Fla. 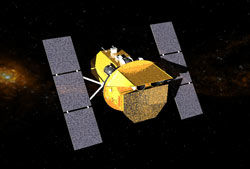 "Swift caps off a 30-year hunt to understand the nature of gamma-ray bursts, flashes of light that burn as brightly as a billion billion suns," said Dr. Anne Kinney, Director of the Universe Division, NASA Headquarters, Washington. "Swift is fine-tuned to quickly locate these bursts and study them in several different wavelengths before they disappear forever. Swift is a little satellite with a big appetite," she said.

Gamma-ray bursts are fleeting events, lasting only a few milliseconds to a few minutes, never to appear in the same spot again. They occur from our vantage point about once a day. Some bursts appear to be from massive star explosions that form black holes.

The Swift observatory comprises three telescopes, which work in tandem to provide rapid identification and multi- wavelength follow-up of GRBs and their afterglows. Within 20 to 75 seconds of a detected GRB, the observatory will rotate autonomously, so the onboard X-ray and optical telescopes can view the burst. The afterglows will be monitored over their durations, and the data will be rapidly released to the public.

The afterglow phenomenon follows the initial gamma-ray flash in most bursts. It can linger in X-ray light, optical light and radio waves for hours to weeks, providing great detail. The crucial link here, however, is having a precise location to direct other telescopes. Swift is the first satellite to provide this capability with both great precision and speed. "We expect to detect and analyze over 100 gamma-ray bursts a year," said Dr. Neil Gehrels, Swift's Principal Investigator at NASA's Goddard Space Flight Center (GSFC) in Greenbelt, Md. "Swift will lead to a windfall of discovery on these most powerful explosions in the universe."

While the link between some bursts and massive star explosions appears firm, other bursts may signal the merger of neutron stars or black holes orbiting each other in exotic binary star systems. Swift will determine whether there are different classes of gamma-ray bursts associated with a particular origin scenario. Swift will be fast enough to identify afterglows from short bursts, if they exist. Afterglows have only been seen for bursts lasting longer than two seconds.

"Some bursts likely originate from the farthest reaches, and hence earliest epoch, of the universe," said Swift Mission Director John Nousek. He is a professor of astronomy and astrophysics at Penn State's University Park, Pa., campus. "They act like beacons shining through everything along their paths, including the gas between and within galaxies along the line of sight," he said. 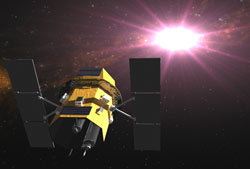 Swift, a medium-class explorer mission, is managed by GSFC. Swift is a NASA mission with participation of the Italian Space Agency and the Particle Physics and Astronomy Research Council in the United Kingdom. It was built in collaboration with national laboratories, universities and international partners, including Penn State University; Los Alamos National Laboratory in New Mexico; Sonoma State University, Rohnert Park, Calif.; Mullard Space Science Laboratory in Dorking, Surrey, England; the University of Leicester, England and the Brera Observatory in Milan, Italy.

Click here for more information on the Swift mission.