NASA SWIFT Mission Turns On, Sees a Blast Of Bursts 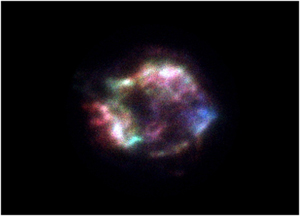 The NASA-led Swift mission has opened its doors to a flurry of gamma-ray burst action.

Scientists were still calibrating the main instrument, the Burst Alert Telescope (BAT), when the first burst appeared on December 17. Three bursts on December 19, and one on December 20, followed.

Image left: First-light image from the Swift X-ray Telescope, of the Cassiopeia A supernova remnant, showing the hot gas remaining from the stellar explosion in 1680. This image uses colors to represent different energy X-rays: the lowest X-ray energies are shown in red (mostly emission from material rich in iron), the medium energies are in green (mostly silicon-rich material), and the highest energies are in blue.

Swift's primary goal is to unravel the mystery of gamma ray bursts. The bursts are random and fleeting explosions, second only to the Big Bang in total energy output. Gamma rays are a type of light millions of times more energetic than light human eyes can detect. Gamma ray bursts last only from a few milliseconds to about one minute. Each burst likely signals the birth of a black hole.

"The optimists among us were hoping to detect two bursts a week, not three in one day just after turning the telescope on," said Dr. Scott Barthelmy, the BAT lead scientist at NASA's Goddard Space Flight Center, Greenbelt, Md. "Maybe we got lucky, or maybe we've underestimated the true rate of these bursts. Only time will tell," he added. 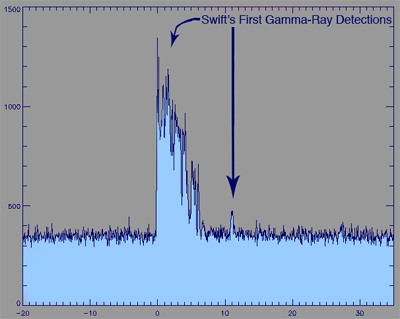 Once the BAT, that covers about one-seventh of the sky at any time, detects a gamma ray burst, it quickly relays a location to the ground. Within about one minute, the satellite automatically turns toward the burst. The move brings the burst within view of Swift's two other telescopes: the X-ray Telescope (XRT) and the Ultraviolet/Optical Telescope (UVOT).

Once all three instruments are turned on and calibrated, Swift will get down to the business of analyzing gamma ray bursts. "The universe kept up its side of the bargain, and we kept up ours," said Dr. Neil Gehrels, Swift's Principal Investigator at Goddard. "This is going to be an exciting mission," he said.

The Swift team tested the BAT by observing Cygnus X-1, a well-known bright source that produces gamma rays in our galaxy. It is thought to be a black hole in orbit around a star. The team called this BAT's "first light."

The BAT is the most sensitive gamma ray detector ever flown. The BAT employs a novel technology to image and locate gamma ray bursts. Unlike visible light, gamma rays pass right through telescope mirrors and cannot be reflected onto a detector. The BAT uses a technique called "coded aperture mask" to create a gamma ray shadow on its detectors. The mask contains 52,000 randomly placed lead tiles that block some gamma rays from reaching the detectors. With each burst, some detectors light up while others remain dark, shaded by the lead tiles. The angle of the shadow points back to the gamma ray burst. 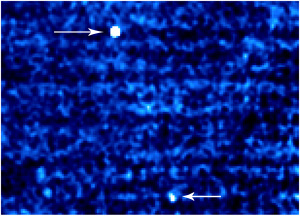 Image right: The Swift BAT's first-light "gamma-ray" image. The bright source at the top of the image is Cygnus X-1, thought to be a stellar-size black hole orbiting a massive star. The bright source at the bottom of the image is Cygnus X-3, a neutron star binary enveloped in a cocoon of swirling dust and gas. What is remarkable about this BAT first-light image is that even the modestly bright Cygnus X-3 can appear in a 6-minute exposure with only three-fourths of the detectors activated. This image captures "soft" or lower-energy gamma rays (also called hard X rays), over a million times more energetic than the visible light that the Hubble Space Telescope detects. Gamma rays cannot be focused like visible light. BAT uses a technique called 'coded mask imaging' to construct an image from the shadow that gamma rays cast through a lead mask above the detectors.

"The BAT coded aperture mask is about the size of a pool table, the largest and most intricate ever fabricated," said Ed Fenimore of Los Alamos National Laboratory, N.M. Los Alamos created the BAT software. "BAT can accurately pinpoint a burst within seconds and detect bursts five times fainter than previous instruments," he added.

Swift, a medium-class explorer mission managed by Goddard, was launched from Cape Canaveral on November 20, 2004. The mission is in participation with the Italian Space Agency and the Particle Physics and Astronomy Research Council in the United Kingdom.