Spitzer Telescope Sees Trail of Comet Crumbs
NASA's Spitzer Space Telescope has snapped a picture of the bits and pieces making up Comet 73P/Schwassman-Wachmann 3, which is continuing to break apart on its periodic journey around the sun. The new infrared view shows several chunks of the comet riding along its own dusty trail of crumbs. 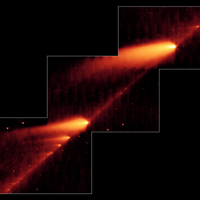 Image right: This infrared image from NASA's Spitzer Space Telescope shows the broken Comet 73P/Schwassman-Wachmann 3 skimming along a trail of debris left during its multiple trips around the sun. The flame-like objects are the comet's fragments and their tails, while the dusty comet trail is the line bridging the fragments.
+ Browse version of image

"Spitzer has revealed a trail of meteor-sized debris filling the comet's orbit," said Dr. William T. Reach of NASA's Spitzer Science Center at the California Institute of Technology, Pasadena. Reach and his team recently observed the comet using Spitzer. The picture can be viewed at http://www.spitzer.caltech.edu/Media/releases/ssc2006-13/ssc2006-13a.shtml .

Comet 73P/Schwassman-Wachmann 3 consists of a collection of fragments that file along like ducks in a row around the sun every 5.4 years. This year, the bunch will pass by Earth beginning on May 12 before swinging by the sun on June 6. The fragments won't get too close to Earth, about 7.3 million miles, or 30 times the distance between Earth and the moon, but they should be visible through binoculars in the countryside night skies.

The icy comet began falling apart in 1995 during one of its tropical trips to the sun. Astronomers believe that its crusty outer layer cracked due to the heat, allowing fresh ice to evaporate and split the comet apart.

During the past six weeks, amateur and professional astronomers have been watching the comet fall apart before their telescopes' eyes. Spitzer viewed the broken comet from its quiet perch up in space May 4 to May 6, covering a portion of the sky that allowed it to spot 45 of the 58 known fragments.

The observatory's infrared view also provides the first look at the dusty trail left by the disintegrating comet after it splintered apart in 1995. The trail is made up of comet dust, pebbles and rocks that occasionally rain down on Earth in what is called the Tau Herculid meteor shower. From May 19 to June 19, as Earth passes through the outskirts of the trail, only a weak meteor shower is expected, with just a few "shooting stars" visible in the night sky. A larger meteor shower might occur in 2022 if Earth crosses near the comet's wake as predicted.

Spitzer's infrared eyes were able to see the dusty comet bits lining the trail because the dust is warmed by sunlight and glows at infrared wavelengths. Most of the dust particles, specifically the millimeter-sized nuggets, had never been seen before. Reach said that these particles probably represent the natural deterioration of the comet over the years, a process commonly observed in intact comets.

The comet dust also adds up to more evidence for the "icy dirtball" theory of comets. In recent years, more and more astronomers are coming to think of comets not as snowballs coated in dust, but as dirtballs crusted with ice.

"By measuring the brightness and extent of the debris trail, we are trying to find out whether most of the comet's mass disintegrates into vapors from evaporating ice, the house-sized chunks seen in images from the Hubble Space Telescope, or the meteor-sized debris seen in the Spitzer images," said Reach.

Reach and his team will continue to study the Spitzer data for clues to how the comet broke up. Their infrared data will tell them the sizes of the major fragments, which might indicate whether the comet did, as believed, crack under the thermal stress.

Comet 73P/Schwassman-Wachmann 3 should be dimly visible through binoculars on a clear night between the Cygnus and Pegasus constellations from May 12 to May 28. For more information about viewing the comet or the meteors, visit http://science.nasa.gov/headlines/y2006/24mar_73p.htm . None of the comet's fragments pose a danger to Earth. For more information, see http://www.nasa.gov/mission_pages/hubble/Comet_73P.html