NASA Scientists Catch a Unique Gamma-Ray Burst
NASA scientists have, for the first time, detected and pinned down the location of a short gamma-ray burst, lasting only 50 milliseconds.

The burst marks the birth of a black hole. The astronomy community is speculating on what may have caused the burst; perhaps a collision of two older black holes or two neutron stars.

Image above: Neutron star collision: The Swift spacecraft's gamma-ray burst observation fits the theory of a collision between some combination of black holes or neutron stars. Neutron stars are dense spheres about 20 miles across. Black holes have no surface and are regions in space of infinite density. Theory predicts that these kinds of collisions would not produce a long afterglow because there isn't much "fuel" -- dust and gas -- from the objects and in the region to sustain an afterglow. Click on image to view animation. Credit: NASA/Dana Berry

Gamma-ray bursts are the most powerful explosions in the universe. Bursts lasting more than two seconds have been observed by NASA satellites such as Swift, built to detect and quickly locate the flashes. Short bursts had remained elusive until May 9, when Swift detected the recent flash called GRB 050509B. Swift autonomously locked onto the location, and the satellite focused its onboard telescopes in less than a minute to capture the burst afterglow.

"Seeing the afterglow from a short gamma-ray burst was a major goal for Swift, and we hit it just a few months after launch," said Dr. Neil Gehrels. He is the Swift project scientist at NASA's Goddard Space Flight Center (GSFC), Greenbelt, Md. "For the first time, we have real data to figure out what these things are," he added. 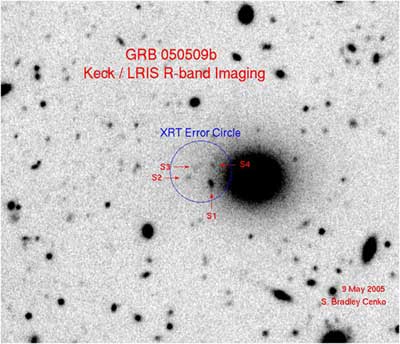 Image above: Ground based Observation by W.M. Keck Observatory: The location of the gamma-ray burst as determined by the Swift X-Ray Telescope (XRT) is shown by the blue circle on this infra-red image of the sky from the W.M. Keck telescope. The burst went off in the outskirts of this huge galaxy 2.6 billion lights years away. The location outside, but near, the galaxy fits perfectly with the theory that short bursts are due to black hole formation when orbiting neutron stars collide. The gamma-ray source has not yet been securely identified and scientists are most interested in the 4 objects within Swift's X-ray telescopes error circle. Click on image to enlarge. Credit: Cenko, Soifer, Bian, Desai, Kulkarni (Caltech), Berger (Carnegie), Dey and Jannuzi (NOAO)

The afterglow contains information about what caused the burst. Most scientists are convinced short and long bursts arise from two different catastrophic origins. The longer bursts appear to be from massive star explosions in very distant galaxies. The shorter ones, less than two seconds and often just a few milliseconds, are the deeper mystery, because they have been too fast for detailed observation.

Swift's X-ray telescope detected a weak afterglow that faded away after about five minutes. Swift's Ultraviolet/Optical Telescope did not see an afterglow. Ground-based telescopes have not definitely detected an afterglow. In contrast, afterglows from long bursts linger from days to weeks.

All of this fits the pattern of a collision between some combination of black holes or neutron stars, both of which are created during the deaths of massive stars. Neutron stars are dense spheres about 20 miles across. Black holes have no surface and are regions in space of infinite density. Theories predict these collisions wouldn't produce a long afterglow, since there isn't much fuel, such as dust and gas, from the objects or the region to sustain one. 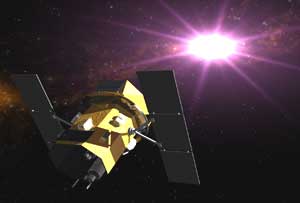 Image right: Swift Spacecraft: Swift is a first-of-its-kind multi-wavelength observatory dedicated to the study of gamma-ray burst (GRB) science. Its three instruments work together to observe GRBs and afterglows in the gamma-ray, X-ray, ultraviolet, and optical wavebands. Swift is designed to solve the 35-year-old mystery of the origin of gamma-ray bursts. Scientists believe GRBs are the birth cries of black holes. Click on image to view animation. Click here for a TIF of the Swift spacecraft. Credit: NASA/Chris Meaney

The burst appears to have occurred near a galaxy that has old stars and is relatively nearby, about 2.7 billion light years away from Earth. This is consistent with the theory that short bursts come from older, evolved neutron stars and black holes. In contrast, longer gamma-ray bursts tend to be in young, distant galaxies filled with young, massive stars, remnants of the early universe.

"We are combing the region around the burst with the Keck Telescope in Hawaii for clues about this burst or its host galaxy," said Shri Kulkarni, from the California Institute of Technology, Pasadena, Calif. Kulkarni is a gamma-ray burst expert. "What we are seeing so far is what proponents of the merger theory have been saying all along," Kulkarni added.

Image left: Swift Spacecraft Launch: NASA's Swift satellite was successfully launched Saturday, November 20, 2004 from the Cape Canaveral Air Force Station, Fla. The satellite is designed to pinpoint the location of distant yet fleeting explosions that appear to signal the births of black holes. Click on image to view movie of the launch (no audio). Credit: NASA

For more information about Swift on the Internet, visit:
http://www.nasa.gov/swift

For more information about this and other Swift-detected bursts on the Internet, visit:
http://grb.sonoma.edu