NASA on the Prowl for Near-Earth Objects
"The most threatening object yet detected in space...a potential threat to Earth...may impact in the future…" These are some of the phrases sometimes used in the media to describe near-Earth objects, comets and asteroids that come within 45 million kilometers (28 million miles) of Earth's orbit. Although chances are extremely slim that objects large enough to cause long-term global devastation will impact Earth, NASA is hard at work to find them so that efforts to deflect them might be developed. 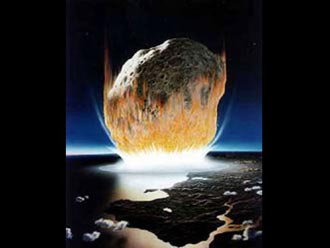 Image right: Research funded by NASA and the National Science Foundation has led to evidence of an impact crater believed to be associated with the "Great Dying," the largest extinction event in the history of life on Earth. Image credit: Continental Dynamics Workshop/NSF.

"NASA is part of the international Spaceguard effort to discover and track 90 percent of large near-Earth objects by the end of 2008," said Dr. Donald Yeomans, a senior research scientist at NASA's Jet Propulsion Laboratory, where much of the tracking is done. The Spaceguard Foundation was established in 1996 and involves efforts from Europe, Asia, Australia and the United States. NASA markedly increased its near-Earth object search efforts in 1998, dramatically improving the discovery rate by conducting extensive sky surveys.

Approximately 65 percent of the estimated 1,100 large near-Earth objects (those larger than 1 kilometer or .62 miles) have already been discovered, with 45 percent discovered since 1998.

Yeomans is part of a team of experts assembled by NASA to predict and define goals to detect hazards caused by near-Earth objects. These comets and asteroids have been nudged by the gravitational attraction of nearby planets into orbits that allow them to enter Earth's neighborhood. Composed mostly of water ice and embedded dust particles, comets originally formed in the cold outer planetary system, while most of the rocky asteroids formed in the warmer inner solar system between the orbits of Mars and Jupiter.

"Once we reach our goal for 2008, we plan to focus our attention more on finding and tracking smaller objects which are more abundant, but harder to find," Yeomans said. "If those smaller objects managed to impact Earth, the damage would be regional, not global.

"We'd like to find objects larger than about 140 meters (459 feet) across, which is the length of one-and-a-quarter football fields. Anything smaller than that probably wouldn't make it all the way through Earth's atmosphere unless it was made from something really tough like iron."

NASA is still defining plans to track smaller objects and continue the near-Earth object search program beyond the current effort through 2008. Smaller objects with diameters of 140 meters (459 feet) or larger would be expected to hit the Earth with an impact frequency of about one in 5,000 years, as opposed to one in 500,000 years for large near-Earth objects.

NASA-funded discoverers of near-Earth objects include the Lincoln Near-Earth Asteroid Research project, managed by the Massachusetts Institute of Technology Lincoln Laboratory, Lexington, Mass.; JPL's Near-Earth Asteroid Tracking program; Lowell Observatory, Flagstaff, Ariz.; and the University of Arizona Lunar and Planetary Laboratory's Catalina Sky Survey and Spacewatch programs based in Tucson, Ariz. Both the MIT and JPL programs take advantage of Air Force telescopes, while Catalina recently opened a southern hemisphere site in Australia. Each of these observatories continues to improve its performance and make significant progress toward eliminating our risk of impact with a large, undetected object. Using observations from these facilities, professional astronomers can compute a near-Earth object's orbit and predict its future motion to forewarn any potential threats.

If either a large or small object were found on an Earth-threatening path and if scientists had enough warning, a very slight velocity change to the object would cause it to miss Earth. Scientists could subtly and slowly change a near-Earth object's path by using existing technologies, including focusing solar mirrors, near surface explosive events, and space tugs. The preferred technique would depend upon the specific characteristics of that object.

"Finding them early is the key," Yeomans said. "If an Earth-threatening object is only discovered a week or two before impact, apart from evacuating the threatened region on Earth, there's not much that can be done. That is why NASA is committed to discovering and tracking these objects decades in advance of any possible threat."