Shielding Spacecraft from Dangers of Space Dust
In 1967, NASA's Mariner 4 spacecraft was cruising through the solar system, not far from Earth, when something unexpected happened. 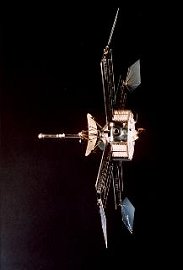 "Mariner 4 ran into a cloud of space dust," says Bill Cooke of the Marshall Space Flight Center Space Environments Team. "For about 45 minutes the spacecraft experienced a shower of meteoroids more intense than any Leonid meteor storm we've ever seen on Earth." The impacts ripped away bits of insulation and temporarily changed the craft's orientation in space.

Fortunately, the damage was slight and the mission's main objective -- a flyby of Mars -- ad been completed two years earlier. But it could have been worse.

"There are many uncharted dust clouds in interplanetary space. Some are probably quite dense," says Cooke. Most of these clouds are left behind by comets, others are formed when asteroids run into one another. "We only know about the ones that happen to intersect Earth's orbit and cause meteor showers such as the Perseids or Leonids." The Mariner 4 cloud was a big surprise.

What does a piece of space dust look like? This picture shows one that is only 10 microns across. It was captured by a U2 aircraft in the stratosphere. Credit: NASA

"Of all NASA's Mars spacecraft, Mariner 4 was the only one we've sent with a micrometeoroid detector," he continued. During its journey to Mars and back, the detector registered occasional impacts from interplanetary dust grains -- as expected. The space between the planets is sprinkled with dust particles. They're harmless in small numbers. But when Mariner 4 encountered the cloud "the impact rate soared 10,000 fold," says Cooke.

Mapping these clouds and determining their orbits is important to NASA for obvious reasons: the more probes we send to Mars and elsewhere, the more likely they are to encounter uncharted clouds. No one wants their spaceship to be surprised by a meteor shower hundreds of millions of miles from Earth.

Much of Cooke's work at NASA involves computer-modeling of cometary debris streams -- long rivers of dust shed by comets as they orbit the sun. He studies how clumps form within the streams and how they are deflected by the gravity of planets (especially giant Jupiter). He and his colleagues also watch the sky for meteor outbursts here on Earth. "It's a good way to test our models and discover new streams," he says.

One such outburst happened on June 27, 1998. Sky watchers were surprised when hundreds of meteors streamed out of the constellation Bootes over a few-hour period. Earth had encountered a dust cloud much as Mariner 4 had done years earlier.

The meteors of 1998 were associated with a well-known meteor shower called the June Bootids. Normally the shower is weak, displaying only a few meteors per hour at maximum. But in 1998 it was intense. Similar outbursts had occurred, with no regular pattern, in 1916, 1921, and perhaps 1927. 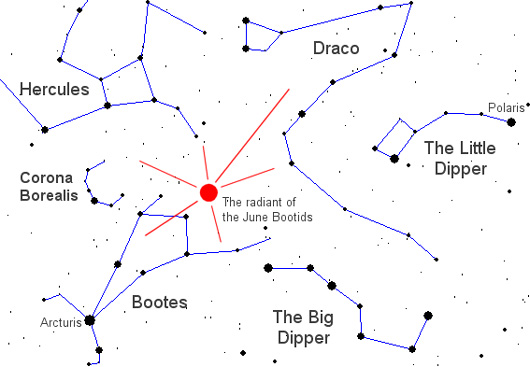 The radiant of the June Bootid meteor shower. Credit: NASA

The source of the June Bootids is comet 7P/Pons-Winnecke, which orbits the Sun once every 6.37 years. The comet follows an elliptical path that carries it from a point near the orbit of Earth to just beyond the orbit of Jupiter. Pons-Winnecke last visited the inner solar system in 2002. The comet's dusty trail is evidently clumpy. When our planet passes through a dense spot in the debris stream, a meteor shower erupts.

Meteor forecasters D.J. Asher and V.V. Emel'yanenko (MNRAS 331, 1998, 126) have calculated that the meteors seen in 1998 might return in 2003, although 2004 is more likely. "That's why watching for June Bootids this year is important: any activity now may herald another outburst in 2004," notes Robert Lunsford, Secretary-General of the International Meteor Organization, who is encouraging people to monitor the sky this week.