Kuiper Airborne Observatory Marks 30th Anniversary of its Dedication
Thirty years ago this month, the world's first major airborne astronomical research laboratory launched an ambitious journey that would take it on more than 1,400 flights through the Earth's upper atmosphere and along the way, yielded exciting discoveries that helped scientists decipher mysteries of the universe. 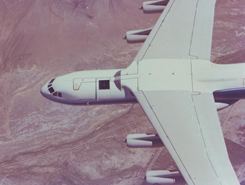 Dedicated on May 21, 1975, the Kuiper Airborne Observatory, often called the Kuiper or the KAO, was based at NASA Ames Research Center, located in California's Silicon Valley. Converted from a Lockheed C-141 military cargo plane, the KAO carried a 36-inch reflecting telescope capable of conducting infrared astronomy, and flew at altitudes of 41,000 to 45,000 feet, above 99 percent of the Earth's infrared-absorbing water vapor.

Named after the late astronomer Gerard P. Kuiper, the KAO has a 160-foot wingspan, measures 145 feet long and stands 39 feet high. The airborne observatory provided a stable platform for the seven and a half hour missions. A typical flight crew consisted of two pilots and a flight engineer, in addition to the mission staff and the science team.

From 1975 to 1995, the KAO played a major role in numerous scientific achievements, including the discovery of rings around Uranus and unexpected infrared luminosity of galaxies. Much of the science produced by the KAO concerned the birth of stars and the conditions in space that affect formation. Before the KAO, little was known about star birth. The KAO opened up the entire infrared spectrum. Today star formation is a major discipline in current astronomical research.

Ames' KAO team was a diverse, but extremely close-knit group of about 50 people, whose common bond was their dedication to the observatory and its science mission. Flying all night and working for days or weeks at a time often from far-off destinations, they developed a camaraderie.

Wendy Dolci, who spent eight and half years from 1987 to 1995 working on the Kuiper team, said the experience produced a "rich and colorful culture." Everyone felt like they owned it," Dolci ventured. 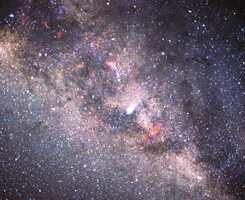 Recalling a mission operating out of New Zealand back in 1986 or 1987, Gene Moniz remembered a time when the Kuiper didn't take off at 9 p.m. as scheduled.

"I was at the Travelodge in Christchurch where we stayed, which was right across the street from the airport," Moniz wrote in a short summary of the incident. "I had gone out to watch the aircraft take off that evening and there were other people all around the hotel. It taxied out, but then it didn't take off. People started coming out of the hotel, because everybody in the hotel knew take-off should occur, but yet they hadn't heard it…roar down the runway. And sure enough, there had been a problem. The aircraft taxied back, and as soon as it stopped, everybody - myself included - jumped on board. We just re-did everything. It took off about a half an hour late. "

To help reduce the stress associated with the long hours of flying and the pressures of meeting any number of scientific and operational challenges, Dolci said scientists and crew sometimes wrote poetry and sang songs they had composed about the observatory. After the airborne observatory was retired, Dolci compiled a small blue booklet, "The Lonely Dark Night Sky" containing a collection of songs and poems composed by the KAO team members and dedicated to two of the KAO team's devoted leaders, Carl Gillespie and Jim McClenahan.

Allan Meyer, who served as a staff scientist aboard the KAO for 20 years, estimates that he flew on some 800 to 900 flights, operating the airborne observatory's telescope. He attributed much of the airborne observatory's success to the charismatic leadership of McClenahan, who died in 2000. Under McClenahan's leadership, the KAO completed a total of 1,417 flights, many of them from Ames, but others from New Zealand, Australia, Samoa, Panama, Japan, Guam, Brazil, Equador, Chile, Houston and Hawaii. 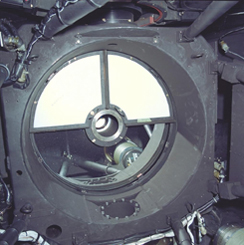 Ed Erickson, a scientist on the KAO for 20 years, recalls a flight in 1978 that took off from American Samoa when two of the observatory's four engines failed soon after takeoff. "The aircraft staggered and instrument power was shut down, but the mission crew and scientists didn't know immediately what was going on. Soon we banked, and the flight engineer came back to crank down the landing gear manually," Erickson said.

But mostly KAO veterans remember the amazing scientific discoveries made on the KAO by scientists from all over the U.S. and abroad. Meyer vividly recalls the 1977 flight from Perth, Australia and flying over the Indian Ocean when the nine thin rings of Uranus were discovered.

During the course of its two decades of conducting aerial observations, KAO astronomers also probed the planets to discover water in Jupiter's thick atmosphere and self-luminosities of Jupiter, Saturn and Pluto. Scientists also uncovered embryonic stars hidden inside dense dust clouds, made the first detection of a natural interstellar infrared laser, and found evidence of a massive black hole at the center of the Milky Way.

"It's nice to be doing what you're interested in," said Meyer, whose job on the KAO was to point its telescope at the night sky. "It was a great experience to be part of the team and one I won't ever forget."

The KAO was decommissioned in the fall of 1995 to make way for the Stratospheric Observatory for Infrared Astronomy (SOFIA) now in development under Ames management.