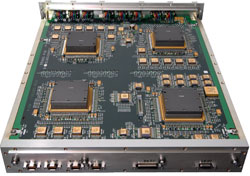 SpaceWire is a standard for high-speed communication links between satellite components. Originally developed by the European Space Agency, SpaceWire has been adopted and improved by a team at the NASA Goddard Space Flight Center in Greenbelt, Md. The James Webb Space Telescope (JWST) Integrated Science Instrument Module (ISIM) and Command and Data Handling (ICDH) engineering team has developed a small and very low power microchip that sends and receives SpaceWire signals at speeds of over 200 mega-bits per second.

The new higher bandwidth from SpaceWire enables the JWST ISIM to support the mission’s science instruments which employ 66 million detector pixels. This is the largest number of pixels ever used on a space telescope, and it will allow JWST to study more of the universe. Handling the large volume of data from these detectors presented a unique challenge for the JWST ICDH team. The development of this new network interface enables the JWST science instruments to realize their full scientific discovery potential, and will permit future NASA mission planners to consider use of more detectors with an even larger number of pixels to see even more of the universe. 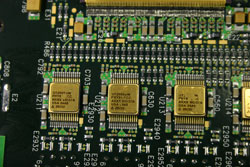 SpaceWire is a standard for high-speed links and networks for use onboard a spacecraft, easing the interconnection of sensors, mass-memories and processing units. The SpaceWire standard provides many benefits. It helps facilitate the construction of high-performance onboard data handling systems, reduces system integration costs, increases compatibility between data handling equipment and subsystems, and encourages re-use of data handling equipment across several different missions.

To understand the benefit of SpaceWire, you can compare the speed of a dial-up modem to a high-speed broadband Internet connection. SpaceWire connects multiple spacecraft components on super-fast links to get a quicker result.

As a result of this JWST technology development, other missions are considering SpaceWire include the Lunar Reconnaissance Orbiter and the Geostationary Operational Environmental Satellite-R (GOES-R). SpaceWire is also being used for technology development at other NASA centers including the NASA Glenn Research Center, Cleveland, Ohio; JPL, Pasadena, Calif.; Langley Research Center, Hampton, Va. and the Marshall Space Flight Center, Huntsville, Ala. 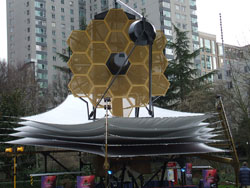 The benefit to other missions from using SpaceWire is a lower cost for development, a reduction of development time, better reliability, and an increase in the amount of scientific work that can be achieved within a limited budget.

Commercially, nearly every major aerospace company in the U.S. has been provided with Goddard’s technology either for projects with NASA or other government labs or for evaluation via a 90-day license. Now Goddard’s technology is being distributed free via Software Usage Agreements.