Mirror Production Begins on Webb Telescope
A major technology demonstration breakthrough has led to the start of production of the primary mirror segments for NASA's James Webb Space Telescope (JWST). 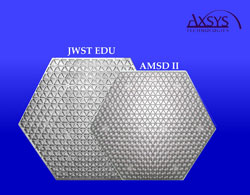 "The fabrication of the primary mirror is on the critical path for the JWST mission so the start of primary mirror manufacturing is an extremely important milestone," said Lee Feinberg, JWST Telescope Manager from the Goddard Space Flight Center, Greenbelt, Md.

These new lightweight mirrors are state of art and are the first of its kind to be produced. The JWST Program invested a lot of time and energy up front in the development of the mirror technology and as a result mirror fabrication has already begun. The mirrors were a major technical challenge for the JWST telescope because of the need for large lightweight mirrors that can operate at cryogenic temperatures. The enabling breakthrough was a technological demonstration that the precision of the mirror surface could be fabricated. The choice of beryllium for the mirrors was made after a six-month evaluation period that took advantage of insights from a panel of experts representing the contractor team, NASA and the science community. 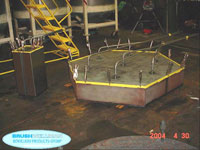 Image to right: Flight blanks loaded into HIP Can at Brush Wellman. Click on image to enlarge. Credit: Brush Wellman

"The development of the lightweight cryogenic beryllium mirror technology has been ongoing for nearly five years so the recent demonstration of the critical aspects of this technology and the resulting formal start of the primary mirror manufacturing is a significant achievement in the overall program," said Feinberg. 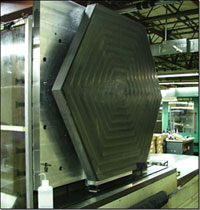 The 18 hexagonal mirror segments are fabricated in batches of approximately six at a time. The total effort takes roughly 4.5 years. The segments have 3 prescriptions of six mirrors each and assembly line techniques can be used to make the mirrors in parallel. The 18 segments are aligned in space using special algorithms being developed and demonstrated on testbeds on the ground.

The mirrors will be incorporated into optical assemblies, mounted on the telescope structure, and subjected to a series of tests at cryogenic temperatures both individually and as an integrated system.

The Observatory design features a 6.5-meter aperture primary mirror, comprised of 18 hexagonal shaped segments. The telescope primary mirror will be 2.5 times the diameter, yet weigh roughly half as much, as the mirror on the Hubble Space Telescope. It will have 50 times the collecting area of the Spitzer Space Telescope that, like JWST, operates at cryogenic temperatures needed for infrared observations. Because of these cold temperatures, JWST will be significantly more sensitive than ground-based infrared telescopes.

Image/animation to right: Footage of the Advanced Mirror System Demonstrator (AMSD) Mirror polished at Tinsley Laboratories Inc. located in Richmond, CA. The AMSD is a 1.4-meter hexagonal mirror system that was designed to demonstrate a potential flight-size mirror segment, which would be used in a multi-segmented primary mirror system. Click on image to view animation. (1.9 MB) Credit: Tinsley Laboratories, Inc.

The JWST is scheduled for launch in 2011 aboard an expendable launch vehicle. It will take about three months for the spacecraft to reach its destination. The JWST will reach an orbit approximately 1.5 million kilometers (940,000 miles) in space, called the second Lagrange Point (L2), where the spacecraft is balanced between the gravity of the sun and the Earth.

To see deep into space, the JWST will carry instruments sensitive to the infrared wavelengths of the electromagnetic spectrum. The new telescope will carry a near-infrared camera, a multi-object spectrometer and a mid-infrared camera/spectrometer. Infrared capabilities are required to help astronomers understand how galaxies first emerged after the rapid expansion and cooling of the universe, a few hundred million years after the big bang.

Images/animations above: JWST is designed to make observations in the far visible to the mid-infrared part of the spectrum. This wavelength coverage is different from that of the HST, which covers the range from the ultraviolet to the near-infrared. JWST will have a primary mirror diameter more than twice as large as HST giving it much more light gathering capability. JWST will also operate much farther from Earth giving it much simplified operations and pointing requirements compared with HST. Click on each image to view animations. Top left animation (2.2 MB), top right animation (5.4 MB), bottom left animation (3.4 MB), bottom right animation (6.4 MB) Credit: NASA