He's got the Moniker, the License Plate and an Asteroid
A NASA Scientist is the World's Eclipse Authority
"The most difficult [trip] was my most recent one -- Antarctica. To get to that eclipse, we had to go aboard a Russian icebreaker that left from South Africa and took about two weeks to get to Antarctica. We observed the eclipse, then it took another two weeks to get back." 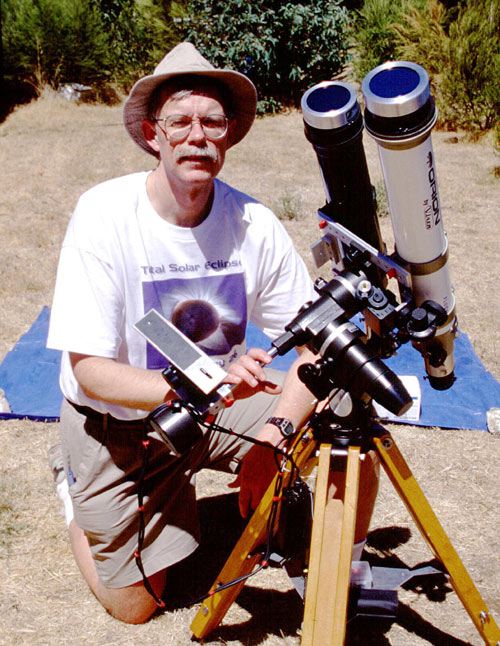 This might have been a journal entry from a past, more romantic era, but it actually happened last year. In a time when science is often performed in a stale office in front of a computer, Fred Espenak has not only become renowned for making eclipse predictions, but also for still traveling around the world to watch and photograph them.

Right: Fred Espenak poses by his trusty telescope on an expedition to Australia in 1999. He's worked for NASA since 1978 and has a physics degree from Wagner College in New York and a master's degree in astrophysics from the University of Toledo. Photo credit: Patricia Totten

He has become one of the foremost authorities on solar and lunar eclipses and maintains a Web site that lists everything you'd ever want to know about the astronomical events from 2000 BC through 4000 AD. And, unlike the reports from the Naval Observatory that he's taken over, his include information for the scientist going on an expedition, amateur astronomers, photographers and even students in a classroom.

"I originally came to eclipses from an amateur point of view because I saw my first total [solar] eclipse in 1970. I was a high school student at the time and there was a total eclipse on March 7, 1970 that ran from Florida up through the Carolinas and Virginia. I'd only had my driver's license for a couple of months and convinced my parents to let me take the car on a 600-mile trip down to North Carolina for this eclipse. Even with all the reading and preparation I had made for the eclipse, I wasn't ready for the impact the eclipse had when I saw it. It's unlike anything you can possibly imagine. It's just spectacular," Espenak said with a gleam.

After North Carolina, there was the solar eclipse in Canada in 1972. Then the eager student convinced his Wagner College alumni office to sponsor a trip to northern Africa in 1973. In exchange, he agreed to give lectures and share his photographs, which were becoming accomplished in their own right. In the next few years, Espenak made it a point to see as many total solar eclipses as possible - 17 and counting. During the late 1970s he also became interested in predicting where and when eclipses take place. 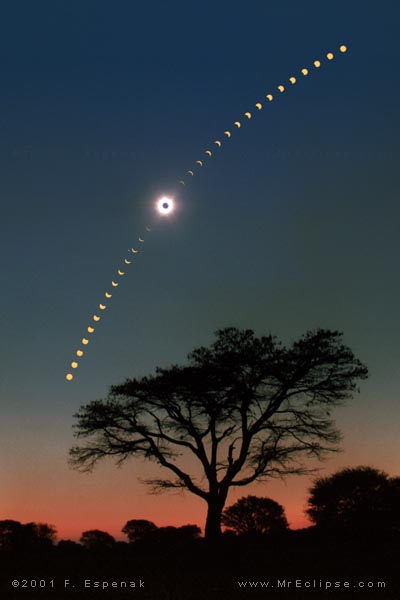 Since the days of Edmund Halley in the 1600s, there has been some type of eclipse predicting, but with limited access and accuracy. In the 1970s there were two or three prediction books worldwide, but these were usually only available at science libraries. The US Naval Observatory published predictions of individual eclipses a year or two in advance, but Espenak, who was studying computer programming at the time, wanted to generate maps 10-20 years in advance. "That was part of my motivation - both in terms of seeing the eclipses themselves and just daydreaming - trying to figure out where the next eclipse was going to be and making plans to see it depending on the part of the world in which it was going to occur."

Left: Fred's photograph montage of the 2001 eclipse in Zambia. More photos are available on his web site. Credit: Fred Espenak

He started publishing papers with predictions and people started requesting copies and traveling to see the events based on his papers. By 1992, the Naval Observatory stopped publishing and asked Espenak to take over. "There are a lot of people doing the calculations, but Fred has the passion to go to the eclipse, publish his photographs, keep up the Web site. Maybe that's what distinguishes him. I think Fred has popularized what he does more than others. [His] articles appear in 'Sky & Telescope' magazine, for example," said John Bangert of the Naval Observatory.

The eclipse reports are available for download on the Internet, and are requisite links for any science Web page. But it is Espenak's photographs and travel information at his personal site, 'MrEclipse.Com' that will really drive home the excitement of eclipses. Said Espenak stoically, "if you're going to stay in one spot [to see an eclipse], you've got to wait hundreds of years on average, so you've got to be willing to travel. The people that you meet along the way assist you and want to put their best foot forward to show you their country. You realize in a certain way you're an ambassador of goodwill."

Espenak no longer has to rely on alumni offices anymore - today he leads eclipse tour groups to far-flung destinations like last year's trip to Antarctica. On that month-long trip, "we [toured] some of the sub-Antarctic islands and Antarctica itself for some sightseeing and observing the wildlife. Just in terms of remoteness, this is a part of Antarctica that never had tourists until 1992. It's called the 'far side'. But that's where the eclipse happened to pass."

So how do you follow up a reputation as an eclipse authority? Any astrophysicist will tell you to branch out into the solar system. In 2003 Espenak had an asteroid named for him. "It's pretty small, just five miles or so and it's not visible with the naked eye. Maybe I'll find the time to take a photograph of it after I retire."

Of course, asteroids don't have the draw of eclipses - even a partial one. As Espenak put it into perspective, "on a scale of 1-10, a partial [solar] eclipse is maybe a 6 and a total eclipse is a million."