Total Lunar Eclipse Draws Attention Back to the Moon 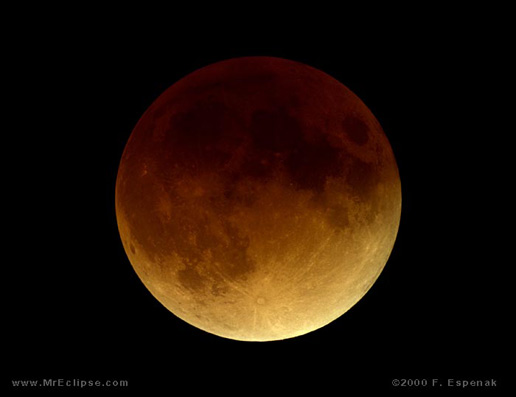 As August draws to an end, watchers of the night sky will be in for a treat. In the early morning hours of August 28, sky watchers across much of the world can look on as the Moon crosses in to the shadow of the Earth, becoming completely immersed for one-hour and 30 minutes, a period of time much longer than most typical lunar eclipses. In fact, this eclipse will be the deepest and longest in 7 years.

The event begins 54 minutes past midnight PDT (3:54 a.m. EDT) on August 28. At first, there is little change. The outskirts of Earth's shadow are as pale as the Moon itself; an onlooker might not even realize anything is happening. But as the Moon penetrates deeper in to the Earth’s shadow, a startling metamorphosis occurs. Around 2:52 a.m. PDT (5:52 a.m. EDT) the color of the Moon changes from moondust-gray to sunset-red. This is totality, and it lasts for almost 90 minutes.

With the Sun blocked, you might expect utter darkness, but instead the ground at your feet appears to be aglow. Why? Look back up at Earth. The rim of the planet seems to be on fire. Around the Earth's circumference you will witness every sunrise and sunset in the world—all at once. This incredible, colorful light beams into the heart of Earth’s shadow, transforming the Moon into a landscape of copper moondust and golden hills. The eclipse will be visible from Australia, parts of Asia and most of the Americas, but not from Africa or Europe. The view is different from each location on the planet. Here in the United States, Pacific observers are favored. For them the entire eclipse will unfold high in the post-midnight sky. However, on the East Coast, totality will be cut off early by sunrise. 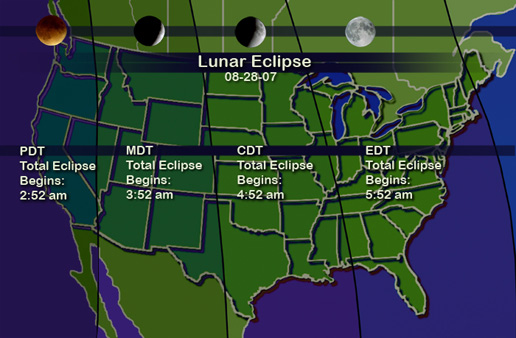 Image above: This map shows the start times for viewing the eclipse for the time zones of the United States. Image credit: NASA. (Click to enlarge)

Here is some of what you can expect to see from various locations across the country:

While sky watchers focus their attention on the eclipse, NASA scientists and engineers are looking at the Moon for a different reason. NASA is getting ready to take its first steps back to the Moon, nearly 40 years after the first human Moon landing.

Image above: Totality is embraced by the partial phases of the 2000 total lunar eclipse. Image credit: Mr. Eclipse/Fred Espanack, www.mreclipse.com.

Next year NASA will launch the Lunar Reconnaissance Orbiter (LRO) to compile the first all digital, next generation maps of the Moon, which will measure topography, temperature, resources, and hazards. Although it is the Earth’s closest neighbor, scientists still know relatively little about the Moon, aside from the six Apollo human landing sites. LRO will dramatically change all that by acting like a "chart-making" Renaissance-era explorer. It will reveal the mysteries of the lunar polar regions while also evaluating from above the changes that have taken place since humans left the lunar surface in December 1972, when Apollo 17 blasted off to return to Earth.

LRO is the first mission in an endeavor to extend a human presence into the solar system, starting with a return to the Moon. Returning to the Moon will enable the pursuit of scientific activities that address our fundamental questions about the history of Earth, the solar system and the universe - and about our place in them, including aspects of the search for life beyond our home planet. 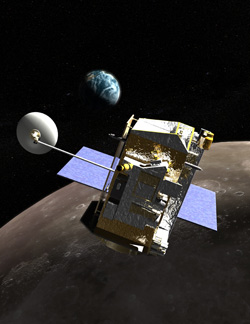 Image right: Image of the LRO spacecraft in orbit around the Moon Image credit: NASA.

LRO is a robotic mission designed to create a boldly new type of comprehensive, digital map of the Moon's features and resources, necessary to cost-effectively engineer a human outpost on the Moon. LRO follows in the footsteps of the robotic predecessors to the Apollo human missions - missions designed in part to search for the safest possible human landing sites (such as the Ranger, Lunar Orbiter and Surveyor missions). However, the goals of LRO go far beyond the requirements of these previous missions.

LRO focuses on the selection of safe landing sites, identification of lunar resources, and the study of how the Moon’s environment will affect humans. In particular, LRO will explore the nearly unknown lunar polar regions, which may prove ideal settings for a sustainable human outpost thanks to nearly constant sunlight and potential resources. LRO’s topographic mapping of the Moon will usher in a new era of Earth and planetary remote sensing, and potentially catalyze solutions of benefit here on Earth, as scientists measure the signatures of climate change.

LRO is scheduled for launch in fall of 2008 on an Atlas V 401 rocket. The spacecraft’s final orbit will be a circular polar orbit approximately 50 km above the Moon's surface (just over 30 miles), closer than any other lunar mission. Indeed, the LRO "vantage point" will be somewhat like flying in a high-altitude airplane around Earth, mapping as it goes. The August 28 eclipse will be a spectacular site, drawing the attention and curiosity of people around the world to the Moon. While there is still much to learn about this planetary body, NASA is taking the first steps to uncover the Moon’s remaining mysteries. The Moon will forever be linked to the history of Earth and, thanks to events such as this year’s enthralling eclipse and the upcoming LRO mission, we can all participate in a new era of lunar exploration.