Scientists Watch Baby Black Hole Get to Work Fast
Baby black holes apparently come into the world kicking and screaming, not unlike humans. And they're fussy eaters, too. Scientists using NASA's Swift satellite say they have found newborn black holes, just seconds old, in a confused state of existence, sloppily gorging on material falling into them while somehow propelling other material away at great speeds. 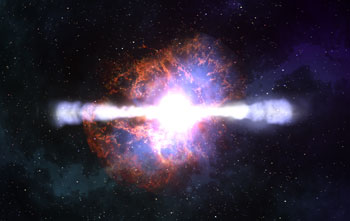 Image to right: When a massive star runs out of fuel, it no longer has the energy to support its mass. The core collapses and forms a black hole. Shockwaves bounce out and obliterate the outer shells of the star. This animation depicts what happens to the most massive stars when they die. Previously scientists thought that a single explosion is followed by a graceful afterglow of the dying embers. Now, according to Swift observations, it appears that a newborn black hole in the core somehow re-energizes the explosion again and again, creating multiple bursts all within a few minutes. Click on image to view animation. + High resolution animation still Credit: NASA/GSFC/Dana Berry

These black holes are born in massive star explosions. An initial blast obliterates the star. Yet the chaotic black hole activity appears to re-energize the explosion again and again over the course of several minutes. This is a dramatically different view of star death, one that entails multiple explosive outbursts and not just a single bang, as previously thought.

"Stars are exploding two, three and sometimes four times in the first minutes following the initial explosion," said Prof. David Burrows of Penn State, lead author on a paper appearing online today on Science Express and in the September 9 issue of Science. "First comes a blast of gamma rays followed by intense pulses of X-rays. The energies involved are much greater than anyone expected."

Scientists have seen this phenomenon in nearly half of the longer gamma-ray bursts detected by Swift so far. These gamma-ray bursts, the most powerful explosions known, are harbingers of a type of massive star explosion called a hypernova, bigger than a supernova. With the Swift satellite, scientists are finally able to see gamma-ray bursts within minutes after the trigger, instead of hours or days, and are now privy to newborn black hole activity.

Until this latest Swift discovery, scientists had assumed a simple scenario of a single explosion followed by a graceful afterglow of the dying embers. The new scenario of a blast followed by a series of powerful "hiccups" is particularly evident in a gamma-ray burst from May 2, 2005, named GRB 050502B. This burst lasted seventeen seconds and occurred in the early morning hours in the constellation Leo. About 500 seconds later, Swift detected a spike in X-ray light about a hundred times brighter than anything seen before.

Image to left: Swift is a first-of-its-kind multi-wavelength observatory dedicated to the study of gamma ray burst (GRB) science. Its three instruments will work together to observe GRBs and afterglows in the gamma ray, X-ray, ultraviolet, and optical wavebands. Swift is designed to solve the 35-year-old mystery of the origin of gamma-ray bursts. Click on image to view animation Credit: NASA/GSFC/Chris Meaney

In retrospect, there had been hints of an "X-ray bump" between the burst and afterglow in previous gamma-ray bursts, coming a minute or so after the burst. Now Swift has seen over a dozen clear cases of multiple explosions. There are several theories to describe this newly discovered phenomenon, and most point to the presence of a sloppy, newborn black hole.

"The newly formed black hole immediately gets to work," said Prof. Peter Meszaros of Penn State, head of the Swift theory team. "We aren't clear on the details yet, but it appears to be messy. Matter is falling into the black hole, which releases a great amount of energy. Other matter gets blasted away from the black hole and flies out into the interstellar medium. This is by no means a smooth operation."

Another theory is that the jet of material shooting away from the dead star starts to fall back onto itself, creating shockwaves in the jet core that ram together blobs of gas and produce X-ray light.

"None of this was realized before simply because we couldn't get to the scene of the explosion fast enough," said Dr. Neil Gehrels of NASA Goddard Space Flight Center, principal investigator of the Swift mission. "Swift has the unique ability to detect bursts and turn its X-ray and ultraviolet-optical telescopes to the explosion's embers within minutes. As such, Swift is detecting new burst details that might rewrite theory."

Swift carries three main instruments: the Burst Alert Telescope (BAT), the X-ray Telescope (XRT), and the Ultraviolet/Optical Telescope (UVOT). Today's announcement is based largely on XRT data. The XRT was built at Penn State with partners at the Brera Astronomical Observatory in Italy and the University of Leicester in England. Penn State controls science and flight operations from the Mission Operations Center in University Park, Pennsylvania.

To track the latest gamma-ray bursts in near real-time, visit http://grb.sonoma.edu.